Below, you will find information on boss battle with Komodo Brothers in Crash Bandicoot 2: Cortex Strikes Back that makes up the Crash Bandicoot N. Sane Trilogy. This is the second boss fight in the game. To win it, you will have to complete all of the stages in Ice Warp Room and find a violet crystal in each one of them.

Description of the battle 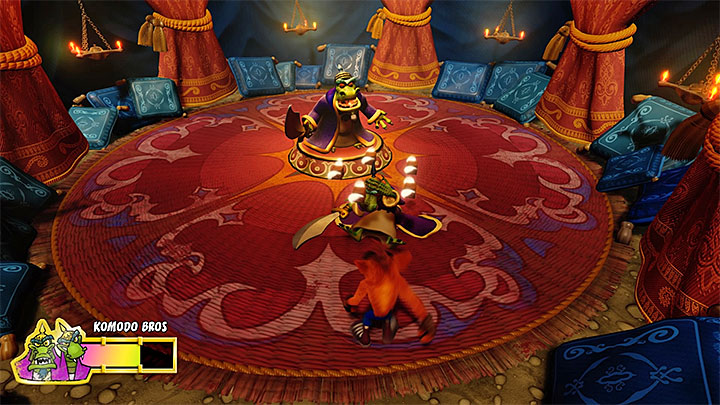 This battle is divided into two phases that occur in turns. In the first one, one of the bosses moves quickly around the arena, while spinning. Avoid this opponent and keep a safe distance. Wait for him to get dizzy (the above screenshot) and run up to him to Spin-attack him. While doing that, you do not have to lean the analog stick in any specific direction, because after taking damage, the boss will bounce off the wall and crash into the boss in the center. This will deprive the brothers of one health point. 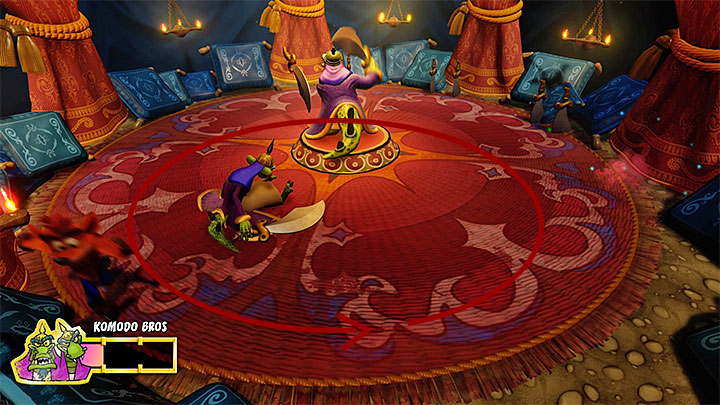 In the second phase, the other opponent takes over. He starts attacking and tossing swords. To avoid taking damage, run around the arena in the anticlockwise direction. Apart from that, try to keep behind the attacking opponent and make sure that he does not bump into his brother, who should be still stunned at that point.

The rest of the battle relies on repeating the above actions. So, attack the first boss after he gets dizzy and avoid ranged attacks from the other, until he I done. Depriving the brothers of three points of health ends the battle and you win.