Note - It is possible to obtain the green gem while playing this stage for the first time. It is a good idea to try and get it, even though it is surrounded with many traps.

This is the first stage of the game in the sewers. Therefore, you will encounter many new types of opponents and traps. It may be troublesome to avoid some of them.

Also reaching the secret chamber with the green gem is not easy. That is because there is a large bunch of nitroglycerine crates in front of it. 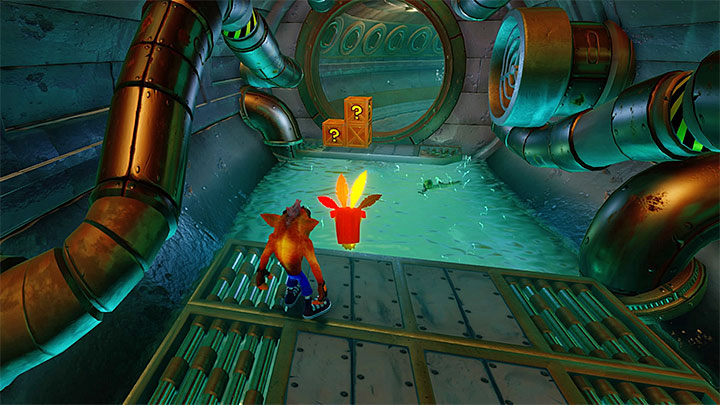 Follow the sewers. After you encounter the first robot, Spin-attack it which will knock it back into the active fan an damage one of the elements. This should help you get around the fan, but use slide anyways, to decrease the risk of colliding with one of the active blades.

Eliminate the robots and take a closer look at the closest water reservoir, where there is an eel swimming (the above screenshot). Thanks to this type of fish, there will be discharges appearing at regular intervals. Wait for them to stop and dash to the other end of the reservoir. In the next tunnel, you will have to avoid another fan, but there should be a mask in one of the crates before it, which should provide protection, in case you bump into a blade.

Approach the new reservoir with an eel. In this location, you can jump over the floating platforms, but you should realize that each one of them goes down to the bottom, if you stand on it for longer than several seconds. 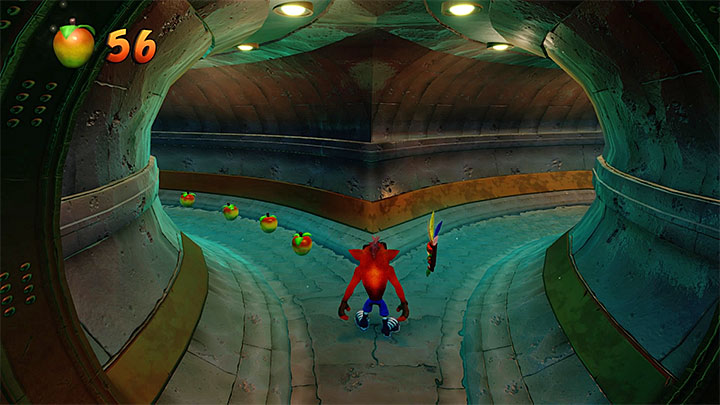 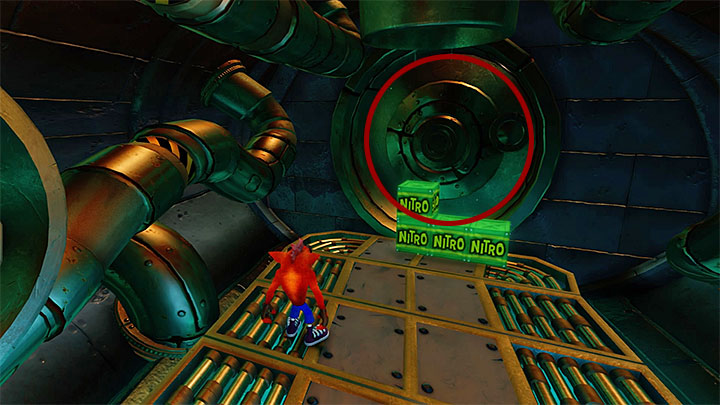 From the moment that you reach the next checkpoint, you will also have to watch out for rats wearing armors with spikes. In theory, they can be eliminated, if only you land on the back of one, but it is much more convenient to leave them alone, especially that they are sluggish.

Get around another reservoir with an eel. Soon, you will reach the fork shown in screenshot 1 . Take the left leg, because this is where the green gem is. You will reach a room with a lot of nitroglycerine crates. Start walking around them towards the wall shown in screenshot 2. It's an illusory wall and you can cross it to enter a secret location.

Walk around the rats and, after you get near the water reservoir, watch out for the green crates. Continue your journey and, after you reach the corridor with five floating platforms, jump from from one over onto the other. At the end of the tunnel, there is the green gem. 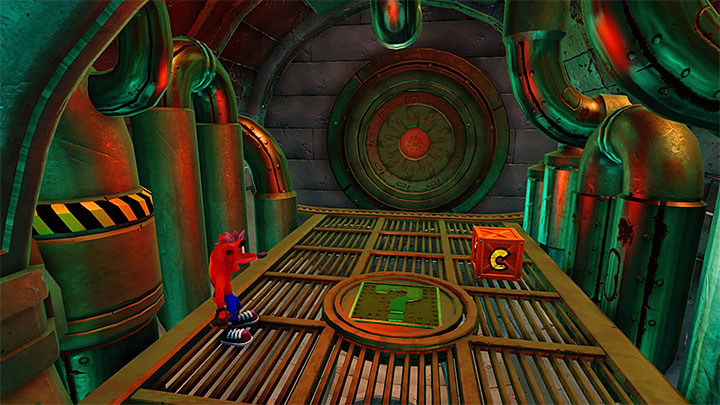 After you have obtained the green gem, return along the same path, up to the fork (again, watch out for the discharges and nitroglycerine crates!) and follow the left leg. Get around the rats and the water reservoir here. You will reach the plate with the question mark shown in the above screenshot. Standing on the plate will warp you to the bonus round.

In the bonus round, there are 14 crates. Hit the metal crate with exclamation mark and reach the bunch of wooden destructible crates. Finally, start bouncing off the arrows to get rid of the remaining three ones. 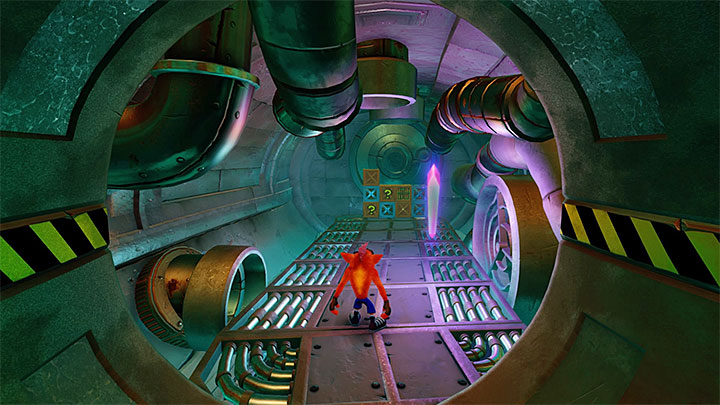 Follow the main part of the sewers. In the next tunnel, watch out for a fan, especially that you cannot launch a rat into it. After you reach a fork, follow the left path, which will lead you to the room with a violet crystal shown in the above screenshot. Also, there are some crates here, and some of them can be destroyed with body-slams.

Return to the fork and check out the right path. Watch your step where there is another eel, because additionally, you have to avoid nitroglycerine crates (jump diagonally). Continue your exploration and, after you reach the end of the tunnel, smash all of the crates. Only after you do that, jump into the nearby hole in the floor. 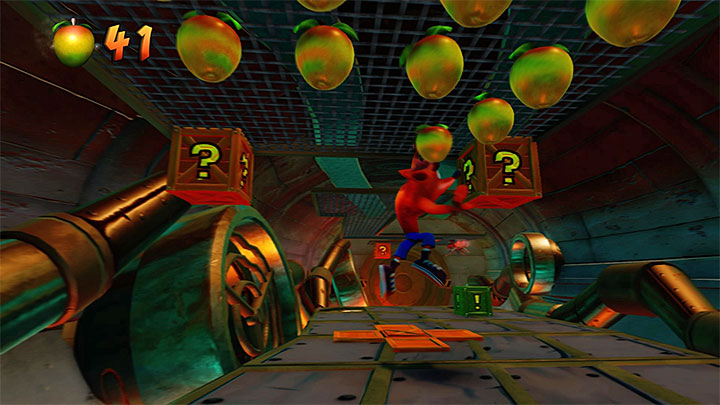 After you reach a new location in the sewers, head towards the upper edge of the screen. Hit the crate with exclamation mark, and jump to grab the grate under the ceiling shown in the above screenshot. While hanging down, start moving and stop after you run into a new opponent. Wait for the robots to move away and go ahead.

Jump off the grate only after you reach its end. In the tunnel, avoid the robots, because they have spikes and bumping into them ends in immediate death. When it comes to the last two robots, jump over them. You can now go straight to the portal and end this stage.

Note - After the end of the stage, you will fight Komodo Brothers who are the bosses. This fight has been described in a separate chapter.