In this stage, you will be traveling on the cub's back. This resembles the stages from the first part of the series, where you traveled on a piglet. Do not worry if you die several times, because the stage relies heavily on remembering the route performing several quick actions to get all of the crates.

Note - The loading screen of the game suggests that it is possible to speed the cub up. Ignore this piece of information, while attempting to obtain the crystal and destroy all of the crates. It will come in handy while playing this stage on with time counter. 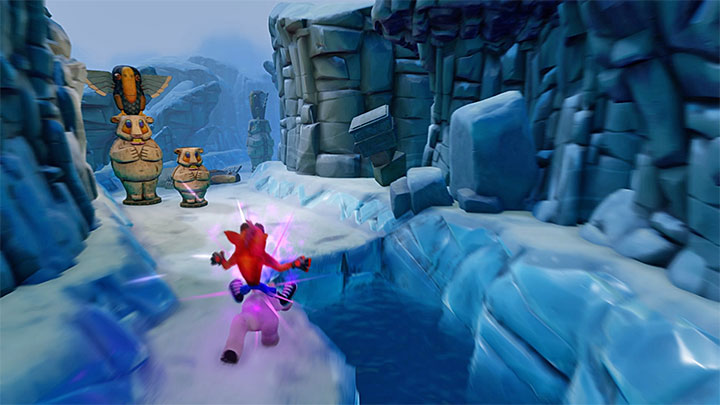 Jump onto the cub to start. After a while, you will have to slalom, because this is the only way in which you can smash all of the crates. Another spot like that is a small icy path, where you have to try to run along the center, because it is nearly impossible to turn on ice.

Shortly, past the first checkpoint, you will obtain the first violet crystal (the above screenshot) and you will encounter killer whales for the first time. They jump over the water surface to the left and right of the ice hole, in turns, so you have to determine beforehand where you can jump safely. 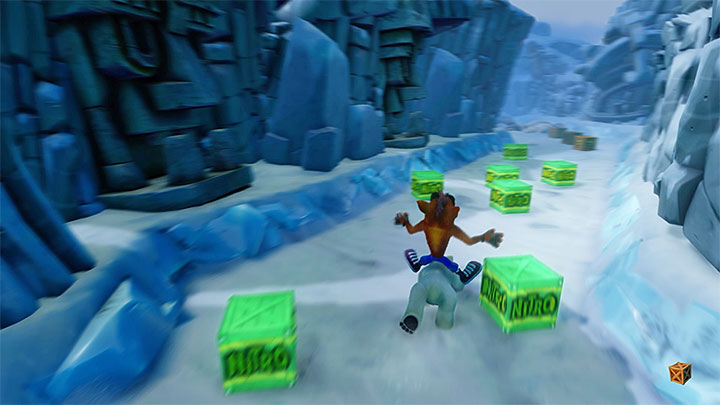 Right after you have unlocked the second checkpoint, you will get into an area with two ticking TNT crates on the sides. Ignore them and run along the center. Remain in the central part of the path, because you will have to avoid icy area with four green nitroglycerine crates.

Up ahead, there is another ice hole and here, you will have to jump diagonally (because the left part of the path is missing).

Right after you take one of the jumps later, go left quickly to avoid the totem. Unlock the checkpoint and, after you reach the mine field shown in the above screenshot, jump carefully over the single crates on the left. After you do that, go right to get three crates. 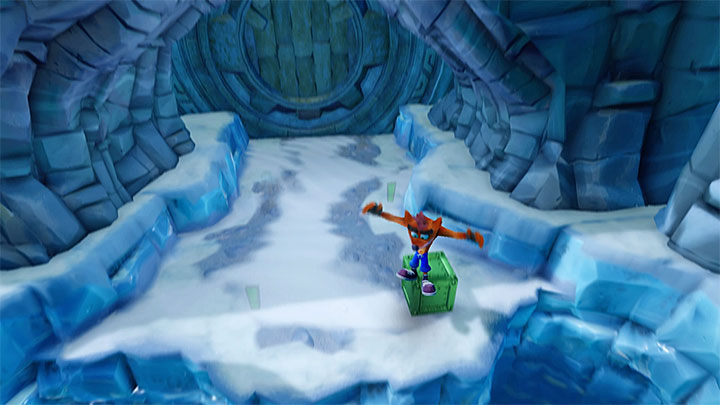 Another demanding spot is the fragment of the path, where the cub has to climb onto a small elevation. There are the last three crates here and you have to exercise your reflex to perform the slalom correctly and smash them all.

Soon, you will be launched into the air. After you land, hit the metal crate shown in the above screenshot, because this will detonate all of the remaining nitroglycerine crates. After that, go to the portal that ends this stage.