Note - Destroying all of the crates in this stage is troublesome, because you will encounter many dangers here. It is best to focus, at first, only on unlocking the secret portal and obtaining the violet crystal. Leave the rest of the collectibles for later.

Try to reach all of the crates ONLY after you have unlocked the secret portal in a later part of Bear Down in Sewer Warp Room (see the bottom of this page to learn more, as well as the walkthrough for Bear Down). Additionally, you cannot have Crash die along his path to the starting point of the first Death Route (this has been introduced in Crash Bandicoot 2).

In its basic version, this stage is not too demanding, although it requires some degree of precision and swiftness, e.g. while avoiding carnivorous plants or nitroglycerine crates.

Unlocking all of the secrets connected with it may not only take you some time, but also cause some problems. This, predominantly, means Death Route, where you have to complete larger part of the stage without having Crash die. 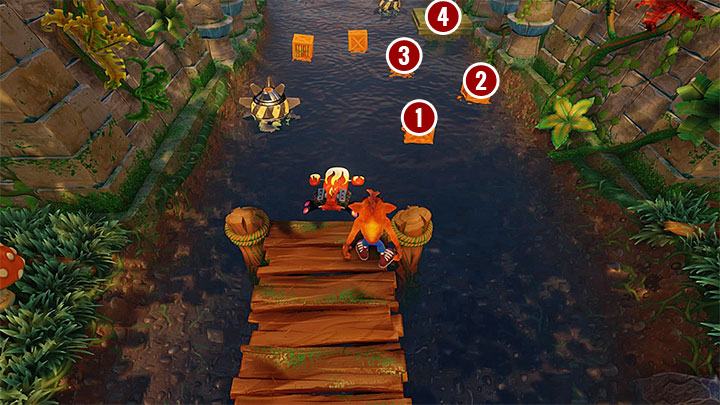 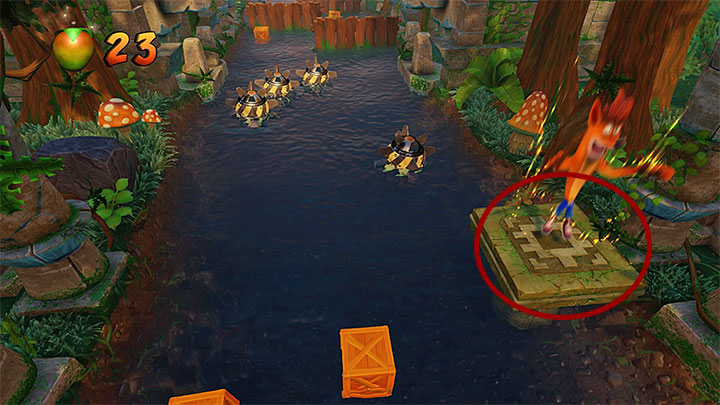 Jump over to the ledge z carnivorous plant (activate Spin attack in mid-air) and reach the neighboring stable platforms. Head up the river and watch out in spots where you have to jump onto the floating pols. Because it is easy to make a mistake here and fall into water. Soon, you will reach the first checkpoint.

Approach the water, BUT do not jump onto the surfboard just yet. Instead, start jumping over crates shown in screenshot 1. You have to get onto the square platform shown in screenshot 2. Jump up here to activate the portal and obtain the Jumping the Jetboard trophy. You will get into a secret room in the basement and you will be able to use the portal to reach the part of Snow Go that is unreachable in any other way. See now the part of the walkthrough that discusses the new secret part of the stage and obtaining the Red Gem. 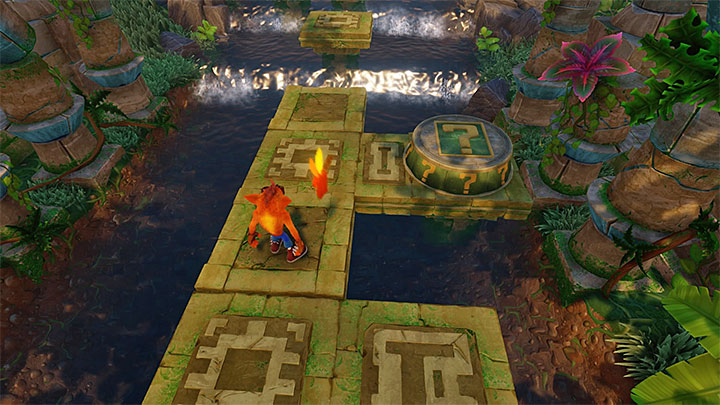 Start this stage once again and this time around, after you reach the first checkpoint, use the jetboard. You shouldn't hurry along the path, because apart from the destructible wooden crates around, there also are a lot of mines here. Use Boost before each ramp to reach the crates suspended high above and make it over the palisade. At the end of the ride, park the board carefully between nitroglycerine crates.

After you return to land, unlock the checkpoint and move on. Jump onto the hippopotamus at the right moment, because the nearby dam submerges on a regular basis and it is easy to drown here. After several steps, you will run into a plate with the question mark, shown in the above screenshot. Thanks to it, you will travel to the bonus round. Here, you have to smash 8 crates. Reach crates with exclamation marks (watch out for the TNT crate, and the brown one that must be body-slammed). Jump between the single crates hanging above the chasm. Finally, take a long jump, after you have bounced off the crate with arrow. 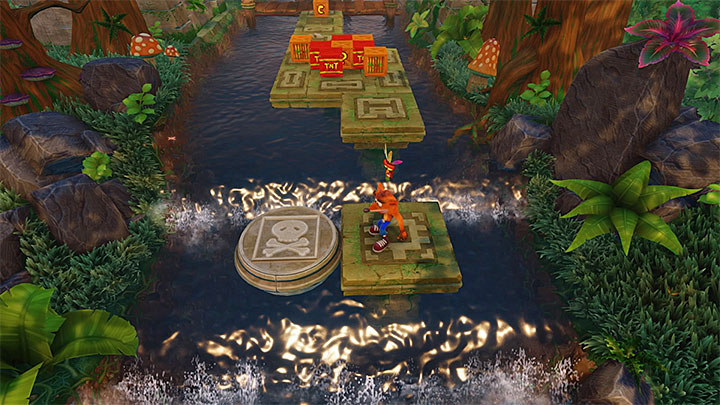 After you have finished the bonus round, head up the river. Along your path, jump onto the single floating crate (you have to jump off just as carefully to avoid drowning) and collect the violet crystal. If you haven't died so far, the round plate with skull shown in the above screenshot will be active and it will take you to Death Route. This is a quite difficult part. You have to start by jumping over the floating platforms. Take short jumps here, to avoid problems with determining where to land. A bit ahead, take three well-timed jumps.

In the second part of the Death Route, there is a short jetboard ride to take. Use Boost towards the end, to squeeze between the three floating mines. Finally, use hippopotamuses to reach the corridor with clear gem. 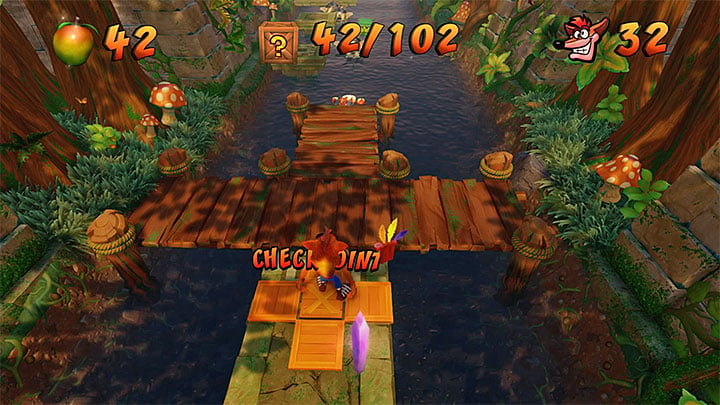 After you return to the main river, head on. In the area with TNT crates, you can first try to smash the regular crates, or start the countdown straight away and leave. Reach the next checkpoint (the above screenshot), but take your time before you jump onto the jetboard. Instead, start jumping over the platforms on the left. It should be noted that these have to be long jumps, so use ducking or sliding to your advantage. You will reach a ledge with four destructible crates.

Return to the jetboard and use it now. Avoid mines, especially the ones floating near the ledge that you have just cleared, as well as those near the palisade. After you leave the water, head towards the finishing point. 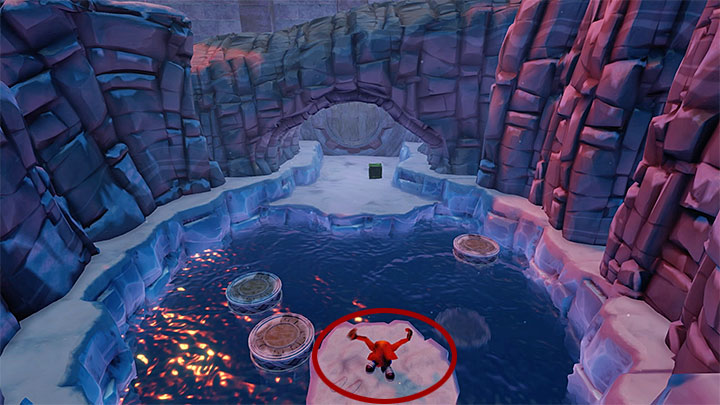 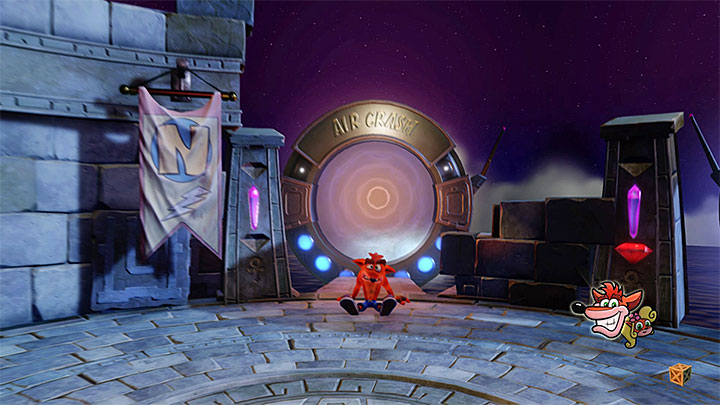 It has been mentioned earlier that all of the crates in Air Crash cannot be reached on the first playing. First, you have to gain access to the first room with portals (Sewer Warp Room) and start Bear Down from there. Complete that stage. After Crash is knocked down by the cub, do not go towards the stage exit and instead, jump onto the floating platforms shown in screenshot 1 (they will submerge, so jump off as quickly as possible). The secret portal will be activated after you reach the larger ledge shown in the above screenshot. You will warp to the secret room in the basement (screenshot 2) and this is where you can use the portal to warp Crash to the part of Air Crash that used to be inaccessible. 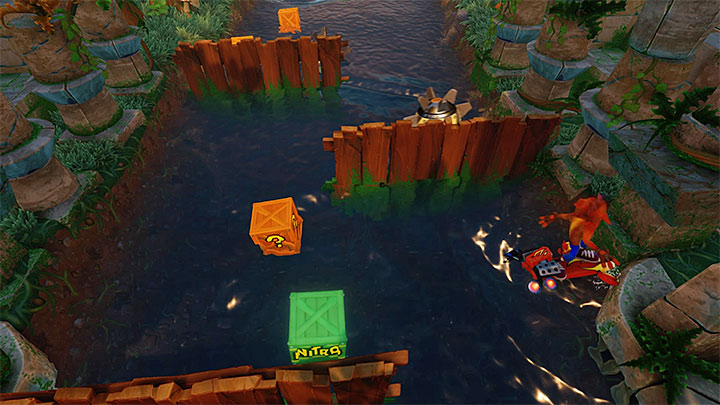 This part of Air Crash is not too long. You have to start by jumping onto the jetboard and, during the ride, watch out for mines, whirlpools and green nitroglycerine crates (one of them is hidden past the first palisade - the above screenshot). Note - if you want to obtain the extra lives suspended above, you will have to take perfect jumps towards the floating crates and lose one life at the end.

After the ride ends, hit the crate with exclamation mark and all of the green crates you have avoided will go off. Climb up and reach the larger square ledge. You will warp to the beginning of Air Crash, from where you can go to find the remaining crates.