Note - It has been mentioned above that you require a red gem, if you are going to smash all of the crates. You can obtain this stone by starting another stage in Ice Warp Room - Air Crash. Therefore, it is better to consider playing the individual stages in a different order: start with Air Crash, take the secret portal there and complete the secret path in mission Snow Go, which will lead you to the location where you obtain a red gem. After you have done that, you can start Snow Biz, because it will be possible then to reach all of the crates on the first take.

This one is a longer and occasionally burdensome stage. Even on the main path ,you can encounter many traps and spots where you have to slide over ice. You will run into even more trouble after you have obtained the red gem and unlocked the secret stage, where there are many more spots where you can die. 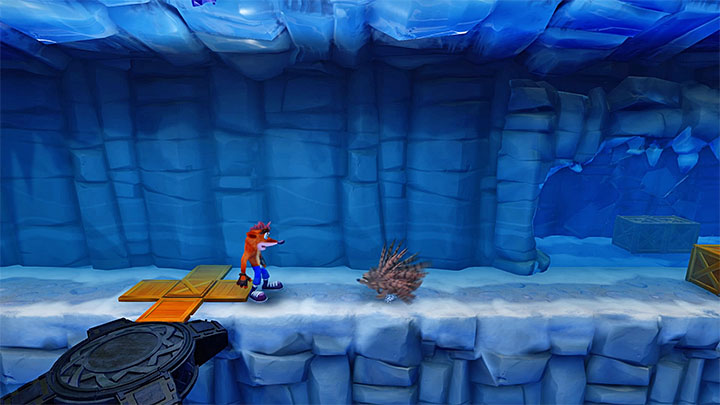 Right after the beginning of the stage, start sliding over ice and, at the right moment, take a jump to avoid the chasm. Follow the linear path and, along your way, jump carefully onto one of the TNT crates to start the countdown. A bit ahead, watch out for the penguins sliding down, as well as for seals. It is best to Spin-attack them when you are still sliding down towards a small chasm. Jump onto the platform to ride up.

In the next part of the stage, go right and avoid hedgehogs at all costs (an example has been shown in the above screenshot), over which you have to jump at the right moment (also, you can attack them by sliding into them, but only when they are not ready to attack). You should especially watch out for the hedgehog on the small stone ledge. You have to jump onto its left side, jump over the hedgehog after it starts moving towards Crash and leave just as quickly. 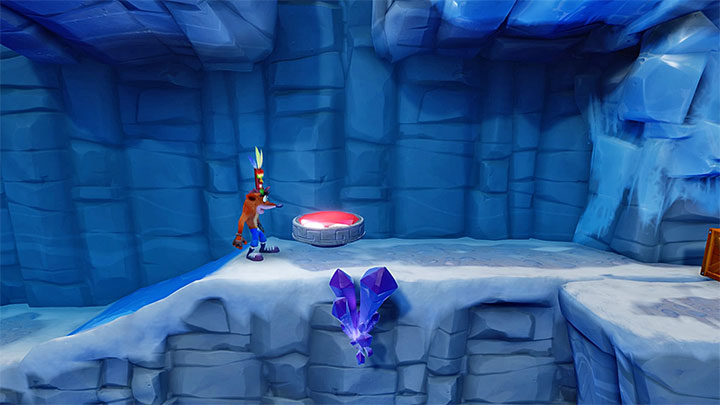 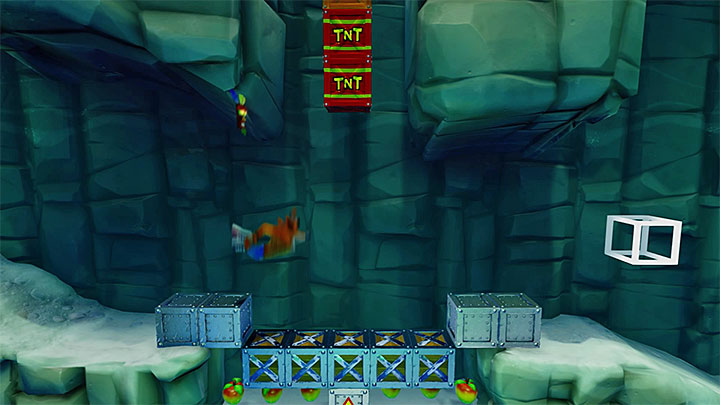 If you have obtained the red gem in Snow Go, soon you will be able to take the red platform shown in screenshot 1, which will take you to a secret stage. Go right here, smash the crates (save the green one). Avoid more hedgehogs and reach the area with a larger amount of crates (screenshot 2). Here, you have to press Circle in mid-air, thanks to which Crash will body-slam into the brown crates and smash them. Additionally, bounce off the crate with arrow to reach TNT crates above and touch one of them.

Note the metal crates on the right. Jump onto the crates suspended from the ceiling (if necessary - slide and jump immediately afterwards). Smash all of the crates above the arrows. Head right and each time you find a bunch of TNT crates, land onto one of them and escape before they go off. 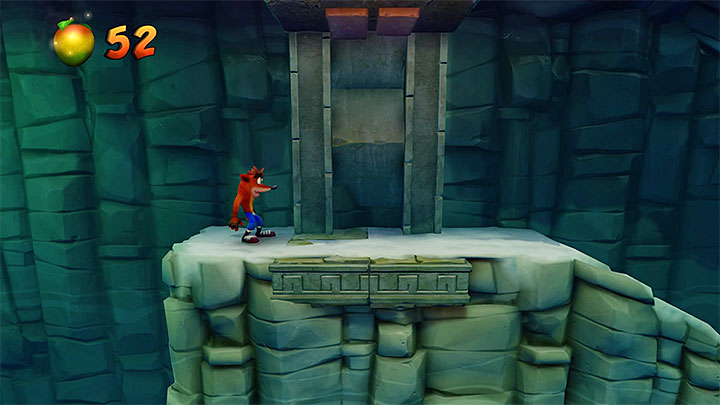 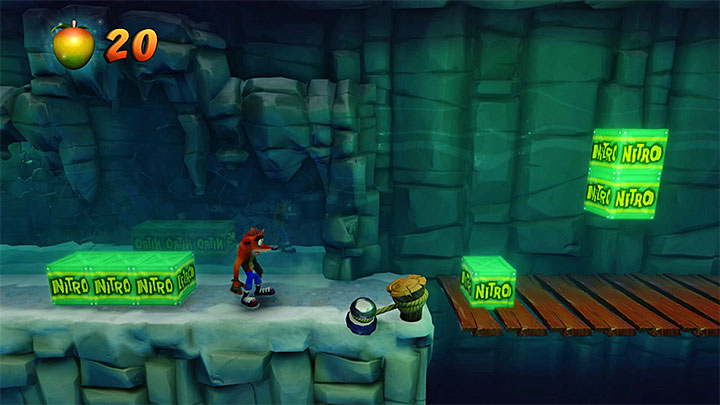 In one of the next locations, jump carefully over the two green crates. In the next area, smash all of the crates suspended from the ceiling, which you can easily reach by performing long bounces. Watch out after you reach the location shown in screenshot 1. You will find the first trap here and, to avoid death, perform a slide. Go right and use slides again to get over the larger chasms. Watch out for a trap here, as well as for the wooden bridge that will collapse after you dash over it. In the next section, you will have to slide under traps and slide alternatingly, to avoid being crushed.

Take a long jump and approach the location, where there is a hedgehog circling around under the nitroglycerine crate. Wait for him to lose interest in Crash and, after it goes right, slide quickly to eliminate it. Finally, hit the crate with the exclamation mark to detonate all of the nitroglycerine crates and leave this place. 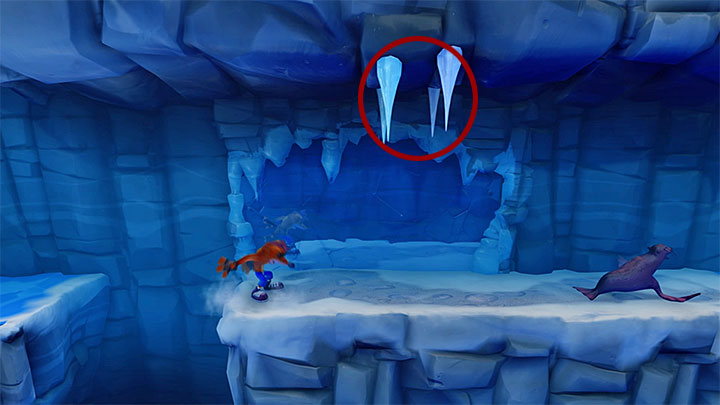 Regardless of whether you have explored the secret area or not, you will still have to go right. Watch yourself before the next jump. It has to be along one (slide in and jump at the moment, at which you are, theoretically, sliding over the chasm) and performed at the moment in which the trap is inactive.

Start sliding down carefully and jump along the ride to smash crates (if you miss any, you can always return here). Right after you take the jump, continue that way to avoid traps. The next slide down will be more difficult, because you will have to eliminate a seal in your way and press the jump button at the end to prevent falling down. Right after the jump, STOP, because there are icicles shown in the above screenshot here, which you might have already seen in the secret stage. It is better to approach the icicles carefully and let them detach from the ceiling and crash in front of you. 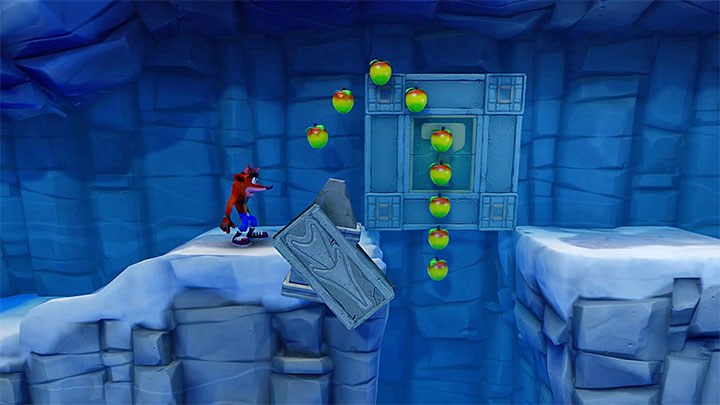 Slide over the ice at the right moment to avid the trap. Smash new crates hidden in the background behind the rocks. After you avoid one more trap, it is a good idea to take several slides, which will make it easier to avoid the icicles. Head right and, in the spot shown in the above screenshot, jump into the large hole to start the bonus round.

Here, there are 18 crates to smash. Watch your step while jumping over the icy ledges and try not to slow down here, because you may be unable to reach the next ledge. Reach the metal crate with exclamation mark and, after you hit it, return towards the crate frames you have been passing earlier to smash them all. A bit ahead, you will run into a wall of crates. Smash one of them and slowly, start to slide left. You have to reach the left edge of this ledge, which will allow you to avoid being blown up by TNT crates. After you have smashed them, go towards the end of the bonus round. 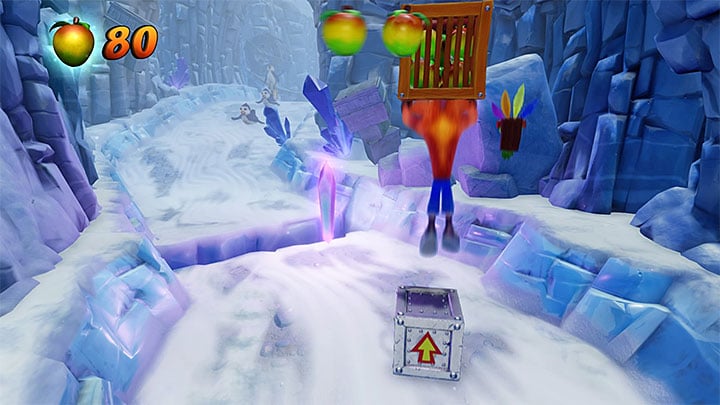 After you return to the main path, start sliding down and eliminate the two seals. You can now jump down into the large hole. You will travel to the next part of the stage, where you go up the screen.

Here, you have to watch out for the rolling stones. In themselves, they do not pose too much problem, but two of them are separated by ice and you have to take sufficient run-up to take a correct jump. A bit ahead, there is a violet crystal (the above screenshot).

Head to the top of the hill and watch out for the penguins. Also, watch your step while on the icy surface, because you will have to jump over a small chasm. What's left is only the rolling stone. Right past it, there is a corridor to the portal that ends this mission.