This stage is may prove to be more difficult than the previous ones, mainly thanks to a new opponent - birds that perform a head-on swooping move that forces you to time your jump. It is also the first level in which you'll encounter a junction - if your goal is to destroy all chests, you'll need to return to the other corridor after clearing the first one. 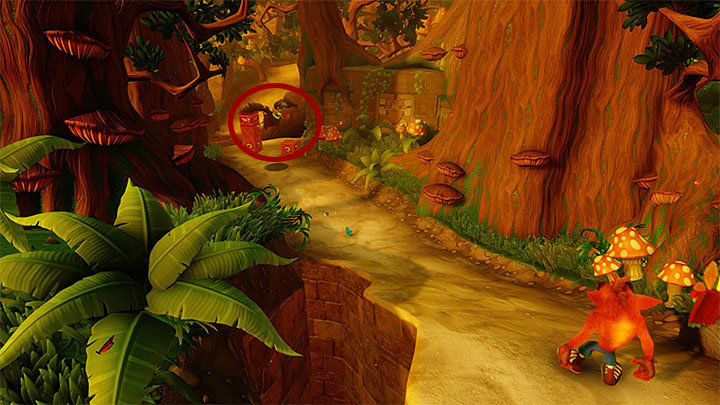 The first encounter with the aforementioned enemy takes place soon after the beginning of the stage. You may have dealt with them in the secret area in one of the previous levels. Otherwise, this will be your first encounter with swoopers. You can either jump over the opponent, provided you are close enough to get over the bird, or simply land on the enemy to dispose of him. 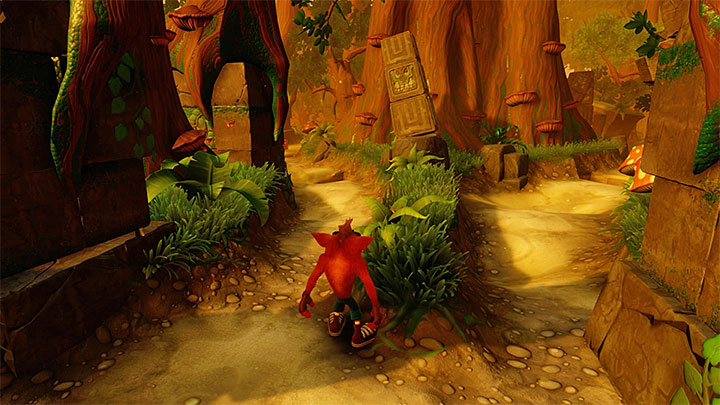 Continue your journey. You'll encounter a junction soon after activating the new checkpoint. Begin by turning left, but remember the area, as you'll return to visit the second path later (provided you are planning to destroy all chests found in the level)

Follow the narrow path and eliminate opponents found along the way. You'll also encounter a chest with an exclamation mark - use it to activate additional chests. The path further ahead is guarded by two birds that will make a swooping move one after another - perform a jump and get rid of both creatures in a single combination. The violet crystal is at the end of the path - there are no additional crates in the left corridor. 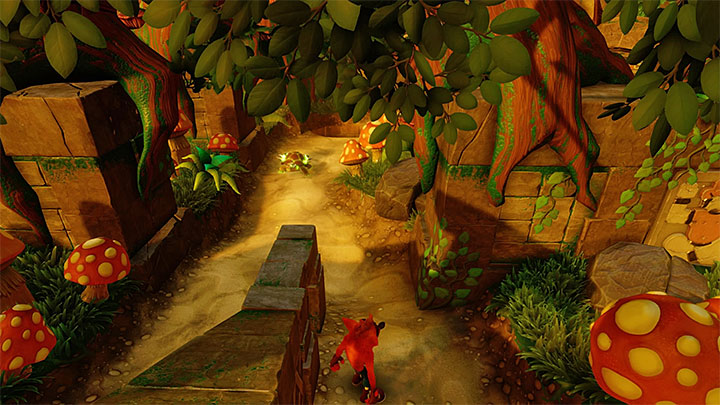 Return to the aforementioned junction and choose the second path. Watch out for turtles protected by spike collars - you can either avoid them or use your spin attack. Destroy new chests (some of them contain new lives) and reach the area where the both paths converge (screenshot above)

Continue down the only available road and activate a new checkpoint. Jump inside the pit that blocks your way forward and defeat the appearing moles to unlock a mushroom and leave the area. 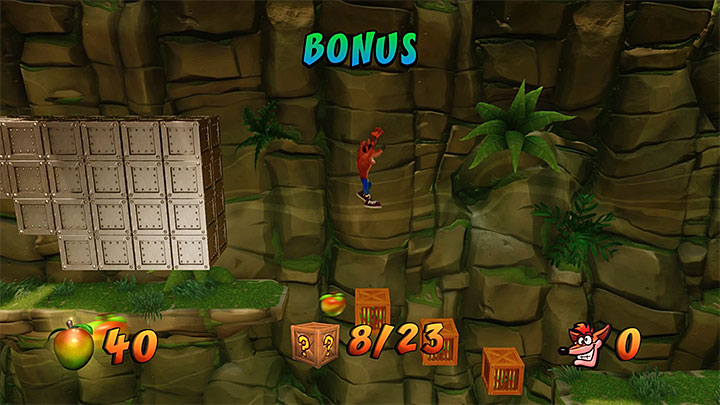 Step on the bonus plate. If you are aiming to destroy all crates (23 in total), you need to follow the tips below, as otherwise you may skip some of the crates.

Destroy the first crate and perform a belly flop (Circle when airborne) to destroy the reinforced crates (they are invulnerable to spin attacks or normal jumping). Continue moving right and slide below a wall made of metal crates. Make your way through the three crates (bounce from each one in order to reach the ledge below) and hit a chest with an exclamation mark found on the second ledge. Now, make your way back by springing from the three chests and destroy 2 crates (make a longer jump) that were unlocked by activating the metal crate. Destroy the three chests (jump on them until they are destroyed and proceed to the next one) and make your way to the end of the stage.

Continue by avoiding turtles and clearing the mole pits until you've reached the portal.