Note - The red gem cannot be attained during the first playthrough of the stage. You need to get access to Air Crash, a stage in the second warp room (Ice Warp Room). The level contains a secret passageway that leads back to Snow Go. More details can be found below and in the walkthrough for Air Crash.

This stage is much harder than the previous one - you'll encounter ice which is slippery and may make controlling your character difficult, for example you may not be able to dodge an obstacle in time. 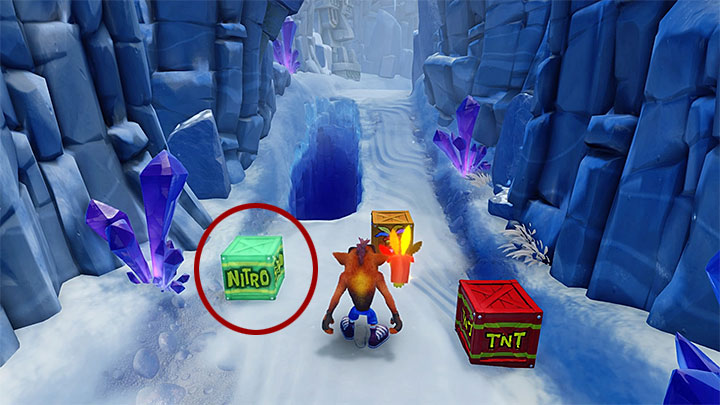 Start moving forward. Jump on the TNT crate to set it off, destroy the normal crate and IGNORE the green nitroglycerin chest (marked on the screenshot above). This type of chests cannot be destroyed on your own, as they explode instantly when contacted. Some of the areas contain detonator chests that detonate the nitroglycerin chests.

Soon you'll encounter first penguins. Avoid their rotating attacks, as they are invulnerable during its duration. Wait for the attack to end then use your spin attack to take care of the opponent or simply skip them completely.

You'll find yourself before the first frozen area. Spend some time to see how your character behaves on ice. Remember that you can change your direction or accelerate by performing a slide (Circle - when Crash is moving). Destroy all crates found in the area and take care of the TNT crate. 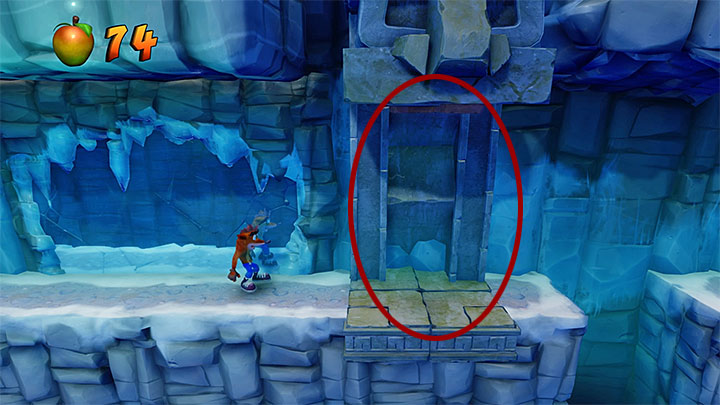 The narrow path ahead is inhabited by seals. Simply utilize your spin attack to take care of the threat. Watch out for the seals descending from the nearby hill, as these are easily hit if you are not careful. Stay mobile, as new seals will appear until you've made it to the top of the hill.

Approach the new rink and make a skew move to avoid nitroglycerin chests, then jump on the platform which will take you to a new checkpoint.

Start moving right. Watch out for the mechanism marked on the screenshot above, as touching the bottom plates activates a large stony block which will crush the area nearby. Either make a run to the other side, or wait until the block strikes to have a safe passage. 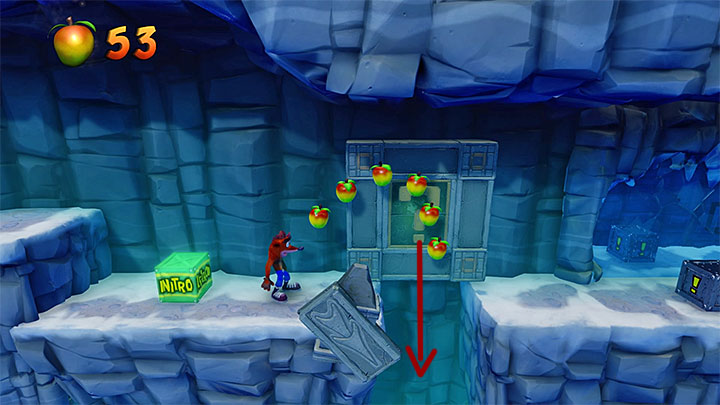 Continue moving right. Aside from a new pressure-sensitive crusher, you'll encounter a series of automatic ones. Get past them and jump over a nitroglycerin chest found further along the way. Follow the sign and jump into the hole to begin the bonus round.

The bonus section is short and contains a total of 10 crates. Move through the ice by destroying two crates and start climbing by utilizing the arranged set of crates (alternatively, you can crouch and press jump to perform a higher jump which will allow you to access the upper crates) and get past the frozen ledge to reach the end.

Once you're back to the main level, hit the metal detonator chest and destroy any wooden chests along the way. Jump inside the hole encountered ahead in order to reach a new checkpoint. Make a few steps backwards - you'll encounter a new detonator chest which will detonate all remaining green chests. 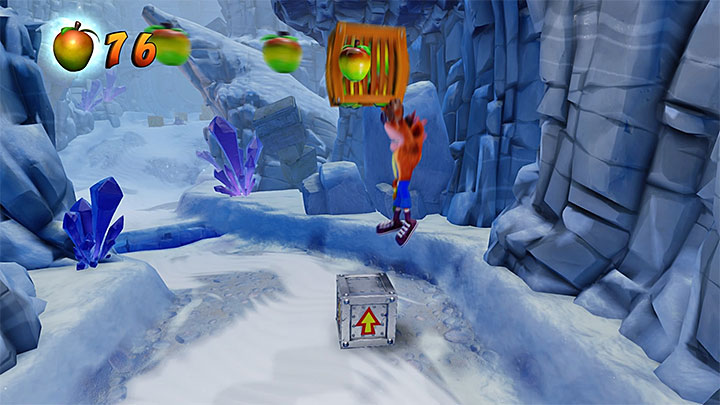 Start skating through the ice and make a jump when close to the chasm. If you've made it to the other side, destroy the crate wall (some of the chests are reinforced, and can be destroyed by utilizing the belly flop) and pick-up the violet gem.

Continue moving forward until you've encountered the second springboard chest and use it to destroy the upper chest and reach a new detonator found fixed high in the air. Double back and make your way to the white frameworks encountered earlier which now turned into real chests.

You're almost at the end of the stage. Watch out for seals sliding down from the hill top - simply jump over them or use your spin attack to get past the obstacle. Destroy the final chests and use the portal to leave the area.

Getting the Red Gem 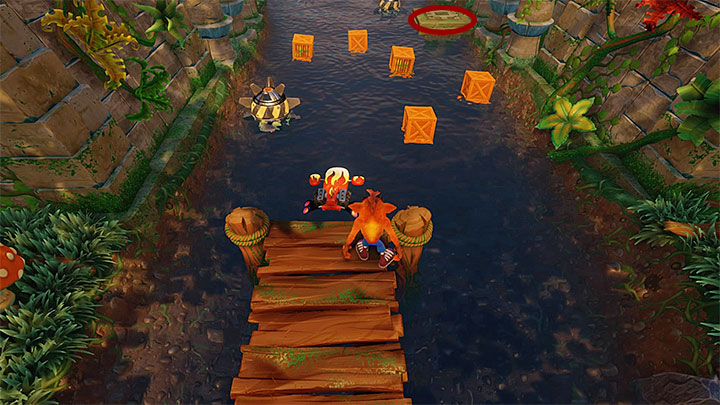 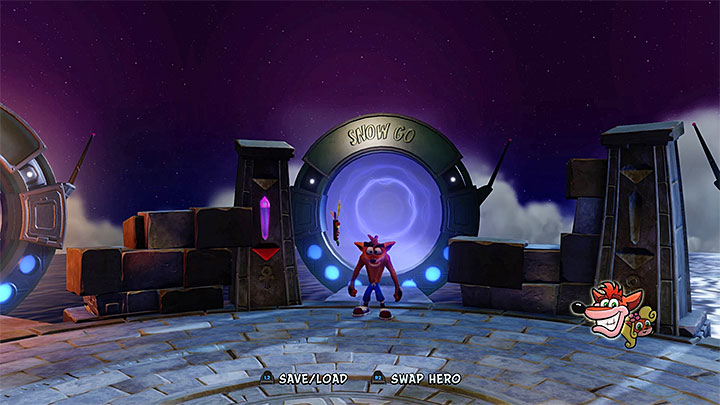 As I mentioned before, you cannot acquire the Red Gem during your first playthrough of Snow Go. Instead, wait until you've gained access to the second warp room (Ice Warp Room) and begin a level called Air Crash. Stop before the first surfing board section and look for an unusual platform shown on screenshot 1. If you've made it to the described area, DO NOT jump on the surfing board yet. Instead, make a long jump to the nearest floating crate and use the remaining ones to access a lone platform which will take you to a hidden portal room. Use the portal seen on screenshot 2 to access a previously inaccessible section of Snow Go. 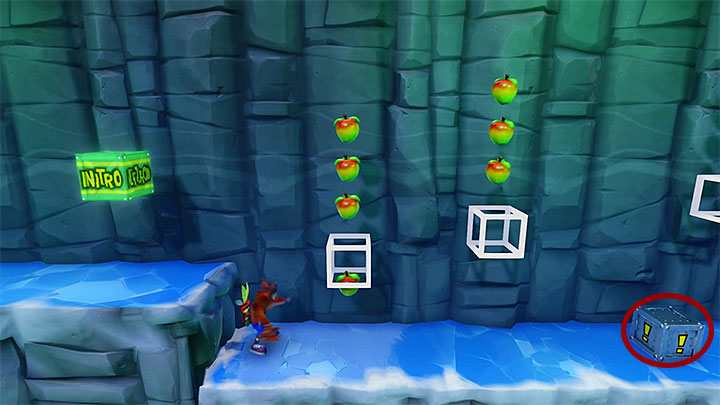 The hidden area is much harder than what you are accustomed to. Maintain momentum by skating right and use your spin attack to destroy encountered monsters. Be ready to make a jump, as you'll need to get past a small chasm.

Continue moving right and past the inactive chests that support a row of apples. Watch out for a green chest at the end of the ledge, as disposing of the penguin may detonate it prematurely. Use the detonator on the ledge below to activate the inactive chests. Start by coming back to the previous area and use the unlocked chests to pick up the apples and a life that are fixed above. 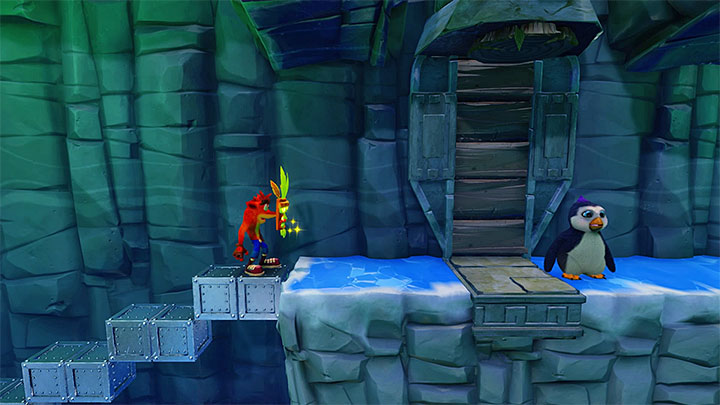 Return to the detonator chest. Jump on it, crouch, and press jump. This will allow Crash to make a larger jump and reach one of the metal chests above. Continue by jumping on the next chest and pick up new lives that can be reached by making a jump off the springboard chest.

The next part of this stage contains various traps that may crush the hero - the first obstacle of this kind is shown on the screenshot above. Perform a slide to get past the dangerous area and take care of the penguin found right next to the trap.

You'll encounter a large density of explosive chests. Start skating right and scale the green chests by making single jumps. Your moves have to be well aimed, otherwise you'll end up blown-up or in one of the chasms. Make a slide to get past the new trap and to dispose of four penguins found on both sides of the area. 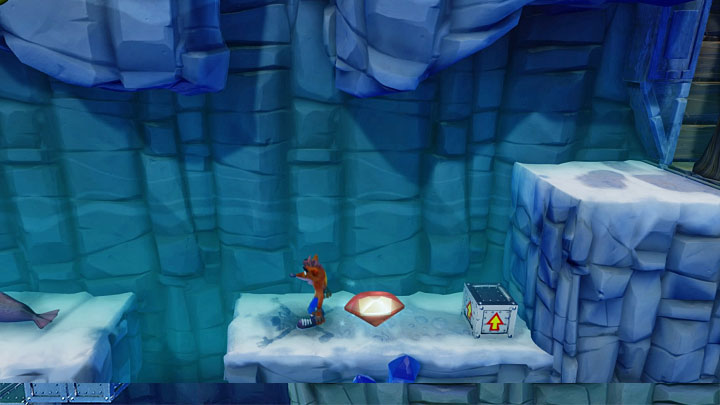 You're almost at the end of the stage. Dispose of a few penguins and jump into a small hole. Crash will pick-up the red gem in flight (screenshot above).

You're back in the already visited part of Snow Go. Make your way backwards to unlock a checkpoint. Turn right and continue through the final part of the level (which you've had visited earlier). The red gem will be added to your collection once you've made it back to the warp room.