Warning - If you want to boast a collection of all the trophies, stop the game after initiating this stage and return to the Warp Room. Then, follow through all the steps seen in the walkthrough for Cortex N. Furiated (the Trophies section) as this is the only opportunity to get this trophy - if you've missed the opportunity, the only other way of getting this achievement is by starting the game anew.

The first fully-fledged level in Crash Bandicoot 2 - the difficulty level is rather low. However, this does not mean that a 100% completion will be easy - the second bonus stage is well-hidden, and getting both gems requires an additional playthrough. 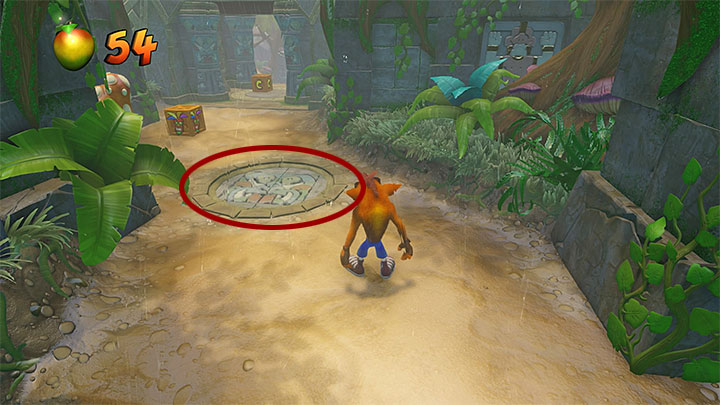 Begin following the main path which should lead you to a small water basin. You can skip the search for an alternative path - simply go in and get submerged into the water without fear of drowning and losing a life.

Stand on the round stony circle shown on the screenshot above. This object serves as an entrance to one of two bonus areas in this level. To begin the bonus stage, stand inside the circle and perform a belly flop (jump and press Circle when in air). Crash will move the plate and use it to travel to the bonus area.

Start destroying the crates and move past the moving turtles. All turtles found in the area have spikes around them that prohibit you from using the spin attack - make a long jump or to land on top of the shell (the turtle will flip and become harmless) to incapacitate them. You'll be engaged by a large bird further along the way. The bird will make an straight swoop - you can hit him from below or scale it by jumping. Skip the nitroglycerin chests by springing from the springboard chest and continue using the platforms above. The ostriches ahead can be simply jumped upon. Destroy the remaining chests and jump on the green chest with an exclamation mark to detonate the encountered green chests and add additional chests to your score. Continue moving right and step on the platform to return to the main area. 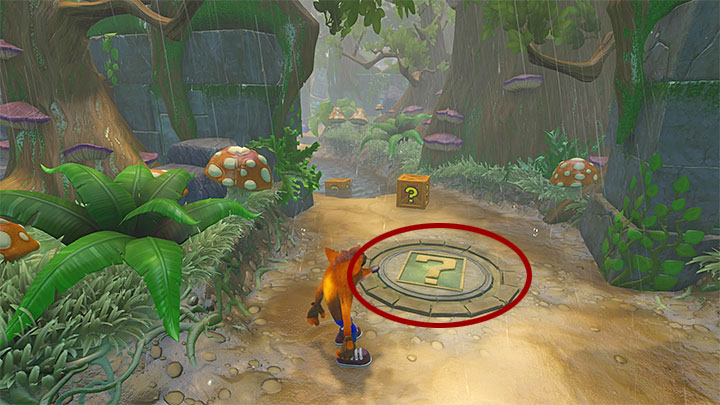 Once you're back to the main area, follow the main path and get past or eliminate the turtles ahead. Soon, you'll reach the entrance to the second bonus area. Simply stand on the plate with a large question mark to fall through to a new section.

The second bonus area is much simpler than the first - follow the path laid by the ledges and destroy five wooden crates.

Continue traversing the area and avoid additional turtles and armadillos. 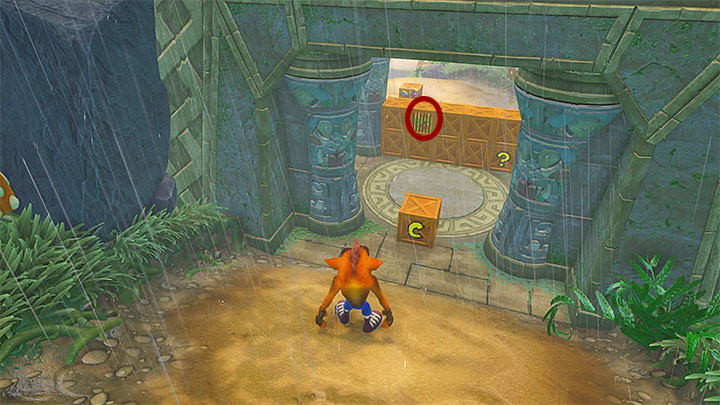 If you are aiming to score the blue gem (awarded for leaving out all chests), you cannot destroy any of the chests that form the wall which blocks the way to the exit portal. The wall consists of breakable chests, aside from a single, more durable chest that survive up to 5 jumps - jump on it to get past the obstacle without losing your chances of getting the gem.

Warning - The wall can be scaled by utilizing a different method. Simply crouch next to the obstacle (Circle) and perform a jump which will be a bit higher than the normal one. This approach is much more risky, as destroying any of the chests will prohibit you from getting the Blue Gem. 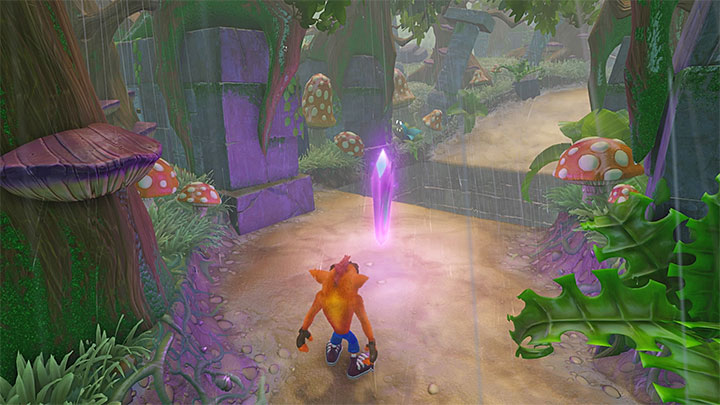 Jump inside the pit. There is no way out, and your presence will summon moles that will start moving around the area. Defeat all opponents using your Spin attack to spawn a mushroom that will allow you to climb back to the ground level.

The path ahead sees you encounter a single turtle. If you want to reach an additional chest, use him as a springboard to reach a nearby wooden chest which is inaccessible with normal jumps.

The final stages of the level see you get past two additional mole pits - repeat the previous steps to emerge on the other side. The area between the pits contains an additional secret - a violet gem shown on the screenshot above. Each stage contains a similar object, which is a pre-requisite of getting access to the next Warp Room. Use the portal to end the level.