Warning - The Green Gem from the Lost City level is used here, although it won't take you to any area with chests. It is only used to reach a secret loation with many additional lifes.

This level is very similar to the previous one, Heavy Machinery, because Crash needs to avoid hot pipes, robots and other traps. Even though the number of destroyed chests required for getting a perfect run is small it is not that easy to get because you need to be very precise in many places and react quickly to the events appearing on the screen. 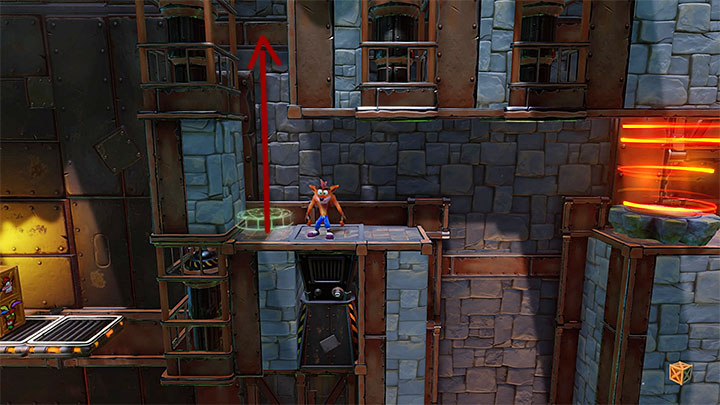 Right after starting this level you stand next to a place, presented in the picture, where you can place a Green Gem. Just to remind you, this item is acquired by completing the previous The Lost City level but in order to get it you must destroy all chests and don't allow Crash to die. After using an elevator you reach a place with a HUGE amount of additional lives to collect. Warning - Don't use the right platform because you will end the level prematurely. Go back to the left elevator and return to the starting point.

Regardless of whether you used a Gem or not you can now jump into abyss on the right from the starting point. You won't kill Crash but instead you land on the lower level. 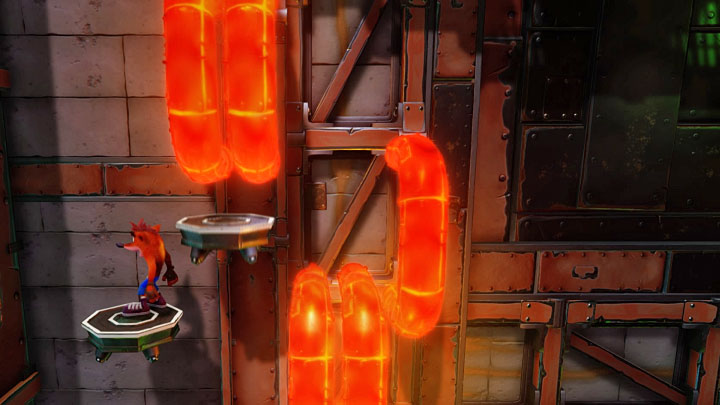 When you reach the lower part of the castle you must head left and eliminate familiar crawling and flying robots. However, you should focus more in a place with robots with spikes, the best way to deal with them is to avoid them carefully.

Go on the first platform that goes up BUT be prepared to quickly move to the next one because the one which you are currently standing on gets dangerously close to hot pipes. This process should be repeated with the next moving platform (the picture above). Lastly, jump right and continue your exploration.

Soon, you will start to travel on conveyor belts. Jump above the red pipe and when you reach the end of the belt you can jump down to the lower one. Continue jumping down. When you are at the botttom you must avoid two last pipes and reach a checkpoint. 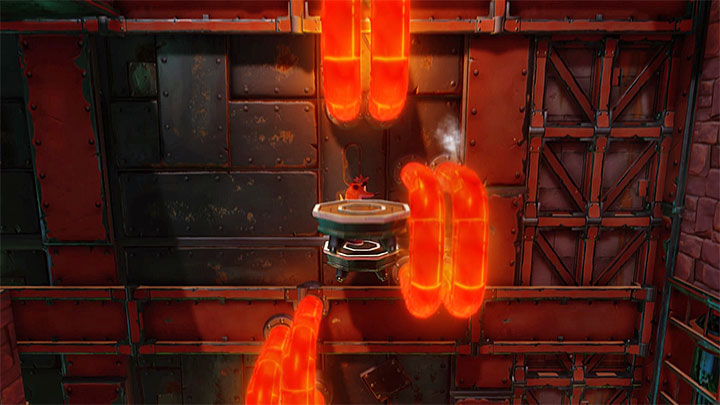 After reaching the small platform you start a new ride to the upper part of the screen during which you must, again, move from one moving platform to another before they get closer to hot pipes. The game makes things more difficult here because in the last two places you must jump to adjacent platforms instead of just walking on them in the right moment. You must also be careful in the place presented in the picture above. Here, you must be ready to press down on the d-pad or move your analog stick down. This allows Crash to get on the platform in the forefront.

When you are in the new area you must go left and focus on avoiding holes, from which a hot gas comes out, perfectly. Just like before it is worth to stop sometimes and try to remember the order in which the gas is coming out. After that you must run on collapsing ledges without stopping. Again, you must jump to the left hole because you don't risk losing life. You land next to a new checkpoint. 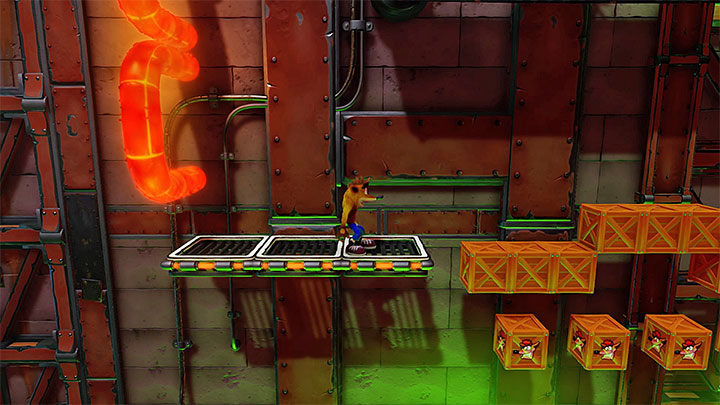 Jump above the first red pipe. In order to avoid the next ones you must land on a robot that walks on them and bounce off of him. Use the first trampoline and reach apples. Then, use the second one to get to an area with a few apple chests, you can bounce off of them. After destroying the chests you must jump into the hole located between blue chests.

Go left and you must avoid the new trampoline because it can eject your character into the upper red pipes. More trampolines can be found on the right. Pick up the apples when you are flying and reach the upper right ledge. Follow the linear path to the checkpoint.

Jump on a conveyor belt start to avoid hot pipes again. Just like in the previous situation, here, you must also jump down to the lower belts. Avoid the robot with spikes. Soon, you will reach the area presented in the picture above. Destroying all chests in this place can be problematic because they are all above a chasm. The best way is to start destroying the chests from the upper level first (leave some of them so you can go left later) and after them you can focus on the lower chests with (four) additional lives. 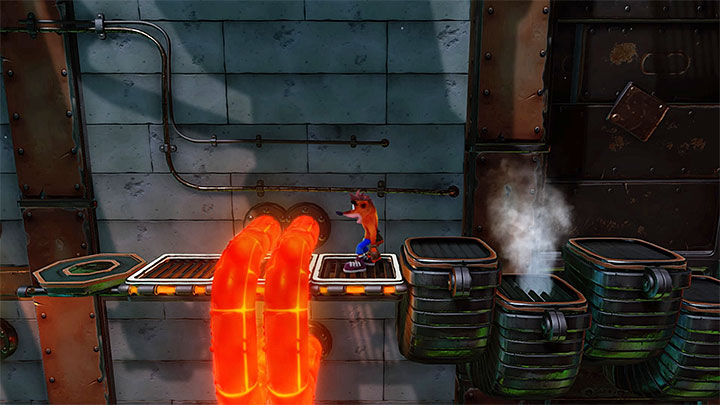 When you are on a new conveyor belt you must go right and jump on a platform that will take you to the higher level. Be prepared to move on a small and stable platform and then you must use another elevator. While you are going up you must keep using the Spin attack because this allows you to get rid of incoming robots.

Head left and get closer to a new area with hot gas. Here, you can find seven holes in total which means that the risk of making a mistake is very high. Observe the order in which the holes open and only then you can quickly jump from one to another.

Soon, you reach the platform presented in the picture above. Here, another difficult section awaits you. The platform starts moving and your task is to jump above the red pipes. Don't jump too early because the platform may not go below a pipe and you will fall into abyss. The same must be done with the second moving platform although here you must also bounce off of a robot. The portal that ends this level is on the left.

Warning - After completing this stage you must face a boss, Dr. Nitrus Brio. The description of this fight can be found in a separate chapter of this guide.