It is not easy to complete this stage, because it requires you to fid 100 crates and, additionally, many of them are to be destroyed during bonus rounds. In the first place, you should make sure that you unlock Neo Cortex's secret round, because it will allow you to obtain the key to the secret stage in Fumbling in the Dark. 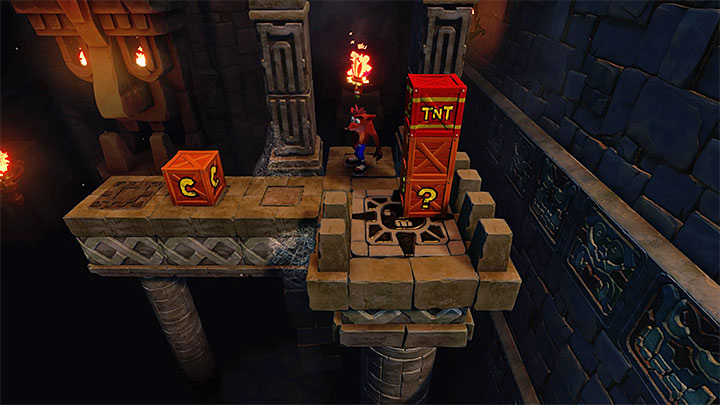 You should be familiar with attractions served in this stage, because you have already been to dark ruins earlier in the game. While completing this stage, you will be required to take correct jumps, because there will be chasms around you nearly at all times. Apart from that, remember to avoid snakes springing out of the holes, bats flying through narrow tunnels, spiders (you can bounce off some of them), sticking out spears, flames, collapsing and moving platfrms, s well as stone blocks that can crush you.

After the start of the mission, go right nd keep all of the abovementioned traps in mind. Also, watch out after you reach the location with small platforms revolving around a stationary central one. Pillars will crumble after you reach specific spots and you cannot be in any of them at that moment. A bit ahead, there is a tunnel with stone blocks that slide out of walls. Jump over the blocks (there are three) and only when there are no bats flying through.

The two moving platforms will take you to a new part of the ruins. Here, head towards the bottom part of the screen, up until you reach crates next to the checkpoint, shown in the above screenshot. In one of the crates, there is Neo Cortex's first token. 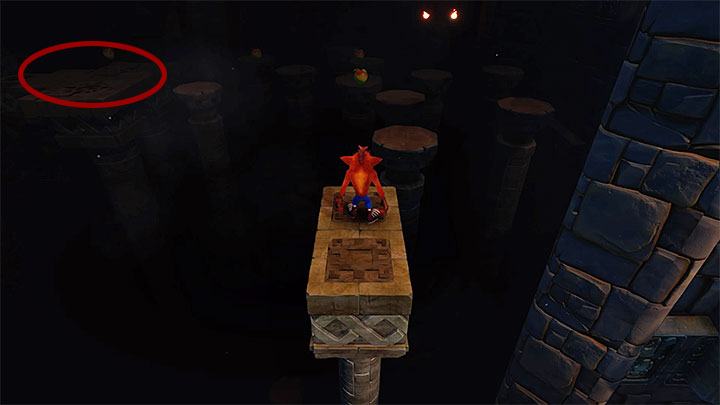 Go left and remember to bounce off the spider to jump over thechasm. On the small ledge to the left, there is a crate and that is where Tawna's first token is.

Head towards the upper part of the screen and reach the area with multiple moving pillars shown in the above screenshot. Spend some time on remembering their pattern. Then, start jumping over them carefully and watch out, because it is darker here and it is more difficult to determine the right place to land. Your destination is the big ledge on the left shown in the above screenshot. 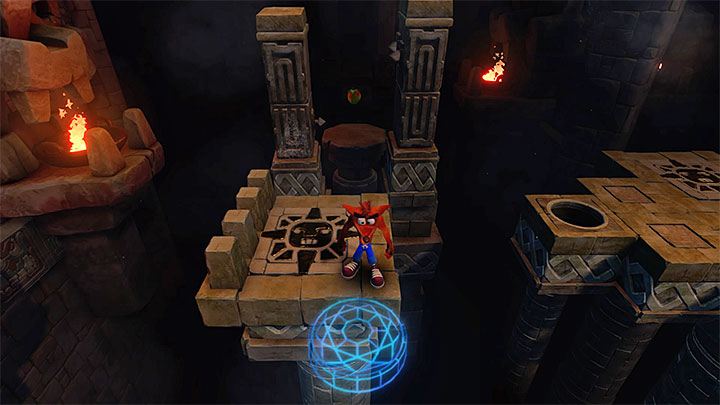 Go left. Soon after you deal with the snake, you will reach the location shown in the above screenshot, where you can use blue gem. Just to remind you, you can obtain the gem by completing Toxic Waste, without dying and by smashing all of the crates there. Take a ride on the platform to the lower ledge, where there is a large cluster of crates to destroy (note - you destoy one of thm after you jump onto the metal crates and activate Spin in mid-air).

This is not it, however, because you can still jump onto the nearby platforms that you activate with the blue gem. There are many of them and, along your path, you will be able to smash additional wooden crates (note - in the case of the TNT crate, jump towards the wooden crate above with extra life, before the explosion takes place!). Thanks to the last platform, you will return to the main path. 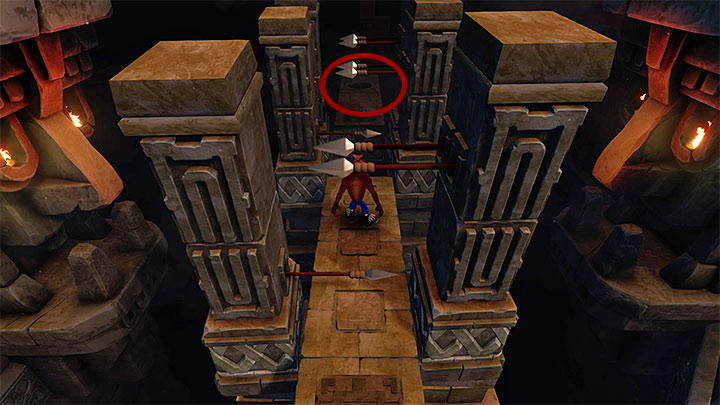 To continue across the main part of ruins, you have to head towards the upper part of the screen and cross another tunnel with stone blocks attempting to crush you (it is a good idea to time well the moments to dash between them!)

Along your path, pay special attention to the hole marked in the above screenshot, which you reach after you have avoided a series of traps with spears. As you can expect, a snake will spring out of the hole, BUT do not kill it with Spin attack and jump onto it instead, to eliminate it. This is immensely important, because otherwise, the sake would detonate the TNT crate on the ledge prematurely. Reach there and first destroy the regular crates, where there is Neo Cortex's second token in one of them. 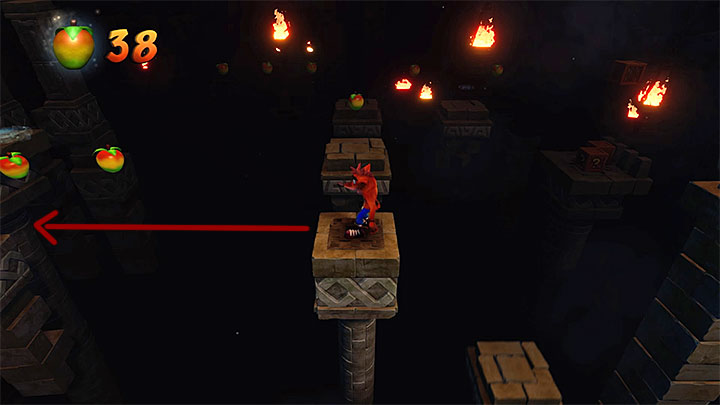 Jump onto ledges and platforms on the left. Stop in the spot shown in the above screenshot. The apples hanging above the chasm suggest that there is a hidden path here. Take several steps to the left and the first platform will appear. Take jumps towards the rest of them, but hurry up because they will collapse one after the other. You will reach a secret location with crates, where there is Neo Cortex's third token.

Right next to this place, there is a portal to Cortex's bonus round. This one is quite difficult, where the majority of jumps that you take are taken above chasms. After you land on the TNT crate, jump onto the neighboring one, at the last moment. In the meantime, the explosion will activate the metal crate and a safe passage will be revealed. Do the same thing in the next location. Finally, start jumping over the six crates close to each other. For your endeavors, you will be rewarded Cortex's Horrifying Trial trophy (it will be unlocked on the stage summary screen) and a key that you need to start the secret stage of Fumbling in the Dark (which has been described on the previous page). 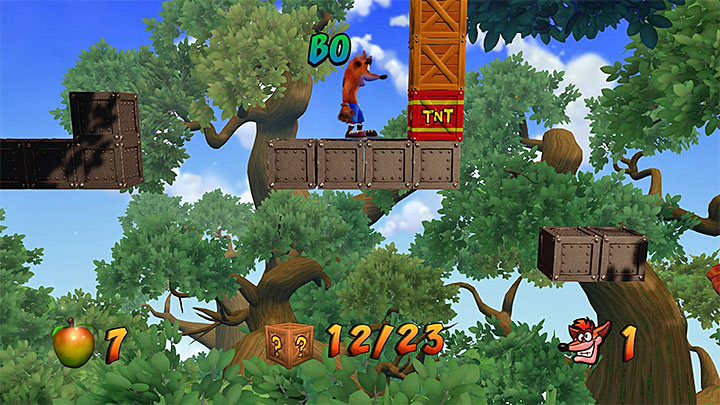 After you return to the main part of the ruins, head up and go right. The new platforms will be appearing in front of you and they will lead you to a stable ledge with some crates. Inside one of them, there is Tawna's second token.

Head up. After you avoid several easy obstacles, you will reach the portal to Tawna's bonus stage. The last, third token is in the nearby crate. This is quite easy a round. After you reach each crate stack (example in the above screenshot), smash one of the crates above the TNT crate. After countdown starts, go left as far as you can to avoid taking damage from the explosion.

After you return to the main stage, follow the tunnel with stone blocks. Take your time here, because you have to avoid a block group of three, by starting to run at the right moment. Reaching the portal will end this quite exhausting stage.