This is one of the two secret stages in Crash Bandicoot (the previous one is Whole Hog on the second isle). You cannot start it right after you reach its starting point on Cortex Island. Fortunately, you do not have to wait for too long before it is unlocked (see below for a detailed description of how to unlock it). 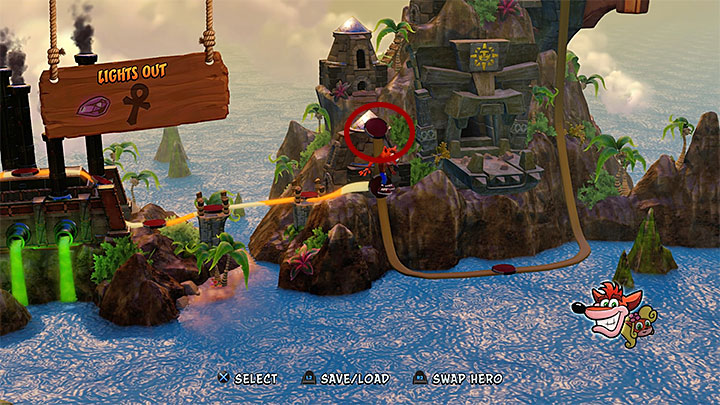 You can reach the starting point of this stage along he path shown in the above screenshot. By default, you cannot use it, because the level is hidden. To unlock it, you gave to obtain the key in the Jaws of Darkness stage described below (it makes a part of the Cortex's Terrifying Trial achievement). You receive the key after you unlock and complete the Neo Cortex's bonus round.

The premise of this stage is identical with the one of the Lights Out stage described earlier, so you have follow the dark corridors and use Aku Aku masks to light up darkness temporarily. It should be noted that in many situations you will have to haste even more, because the masks may go out long before you reach another one.

After you start the stage, explore the bottom part of the screen. You can land there on the safe ledges placed on the sides. There are several crates that you can find in this part of the corridor. An innovation in the later part of the stage are spiders that you have already encountered on the second island. At first, it is best to eliminate them with Spin attack but later on, it is much better to take long jumps over the spiders, which will speed up your progression and decrease the risk of fumbling in complete darkness.