In many respects, this is an unique stage. Its main characteristic is that it takes place in dark corridors that you have to light up, if you do not want to grope your way. Apart from that, the level allows you to obtain purple gem, but you first have to obtain the yellow one, because this is the only way in which to reach the three missing crates. 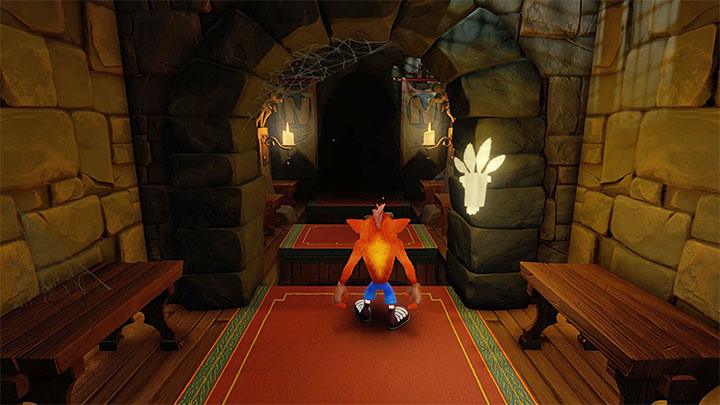 Start by smashing the nearest crate with Aku Aku mask. Each time you do that, the mask you collect will light up the area around you (shown in the above screenshot) and make reaching your destination easier. Unfortunately, masks run out of juice after a while. Although theoretically, it is also possible to travel in complete darkness there are many deadly traps around, which makes it impractical.

You will be finding more masks at regular intervals and all of them are on the main path. In general, while completing this stage, it is best not to stop anywhere for longer, thanks to which you can be sure that the masi will not go defunct too soon.

Note - the mask stops lighting the area after you run into an opponent, or after you sprong a trap. This should serve as an additional motivation to end this stage flawlessly. 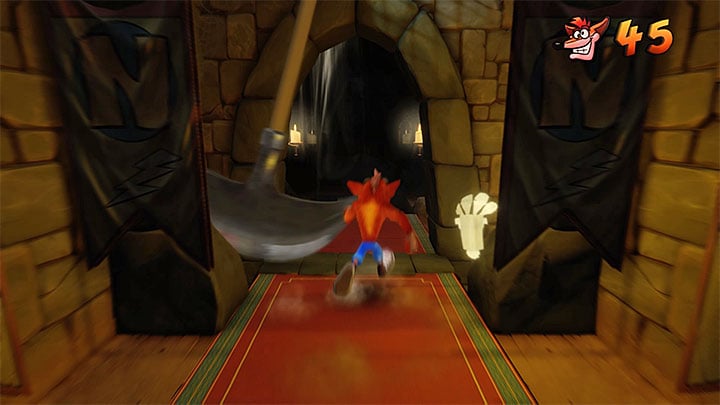 Follow the main corridor, where there are many jumps to take. Fortunately, the majority of them are quite easy and only after you pass by the first checkpoint, will you start running into moving platforms which will have you take a jump only when it does not mean instand death.

After you get past one of the checkpoints, you will encounter oversized rats for the first time. They are very easy to eliminate, because you can do that with Spin attack. However, do not let them hit you and do not stop while attacking them (especially that new ones can appear in the place of the killed ones).

Another point that makes things difficult are traps similar to the one shown in the above screenshot. They are easy to avoid, but remember that you shouldn't stop here unnecessarily. 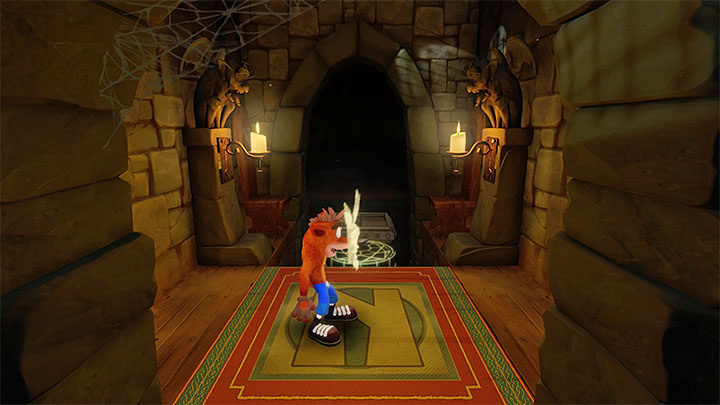 It has already been mentioned at the very beginning that to destroy all crates, you will require yellow gem awarded for perfect completion of the later stage The Lab. If you already have the gem, you can use it in the spot shown in the above screenshot. This will take you to the top of the tower and, apart from crates, there also is an alternative portal ending the stage there you could have already found the remaining 12 crates earlier).

While completing the stage, for the first time, you cannot use the gem, so continue along the main corridors. Along your path, you will encounter no more traps, although you should watch out in the spot where you are to jump between two blades, because the ledge that you land on is unstable and it drops down after a while. The same goes for the next two platforms that separate you from the stage ending.