Arguably, this is the most difficult stage in the game. This results from several factors. First, there is only one "regular" checkpoint here, as well as an extra one that you receive for unlocking the bonus round. Secondly, in the castle, there are many traps and spots where you have to take perfect series of jumps. Thirdly, if you want to obtain the red gem, you have to collect all the collectibles in this stage and not die even once. This is a demanding thing to do - you will have remember the order of traps and take all the steps perfectly. 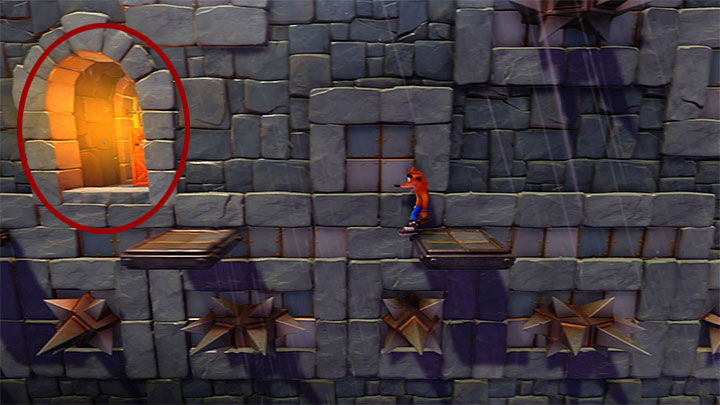 Smash the crates in the starting point and go left. The high difficulty level of this stage will manifest itself from the very beginning, because you will have to jump onto the platforms moving horizontally at the right moments. Take the jumps only when the platform that you are currently on is in its leftmost point. After you jump onto the second platform, look into the recess that you pass by, because there are two crates in it (including one with extra life). This has been shown in the above screenshot and later into the stage, you will be running into more such spots.

After you land on the stable ledge, watch out for the prisoner waving his hand between the bars. Fortunately, it is easy to eliminate such opponents, because you simply have to Spin-attack them. In the next part, you will have to jump over ledges of walls that slide out alternatingly. 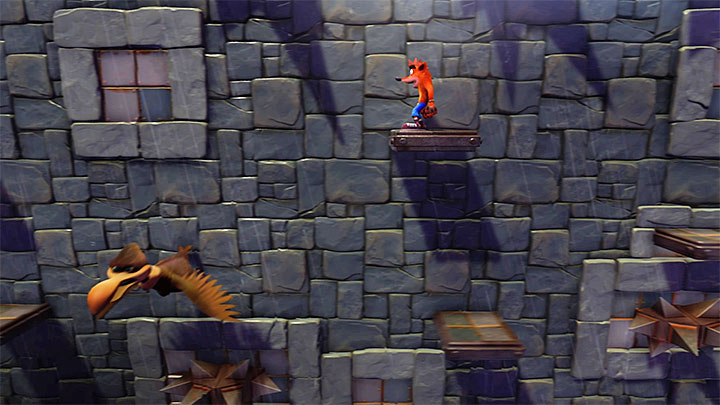 Jump onto one of the platforms propelled by the rotary mechanism. Here, you will encounter a new type of obstacle, which you will also be encountering later in this stage. You have to jump off the platform when its elevation is big enough (shown in the above screenshot) and bounce off the big bird (do not try to stop while on its back!). Soon after the jump, wait for the opportune moment to jump ito a new recess with crates. Jump onto another bird and collect the first token with the image of Nitrus Brio from the recess. Get around the sliding ledges and prison cells. On the left, there are two birds flying. You have to jump onto the first one, BUT when it is high enough, because this is the only way to jump onto the other bird and onto the ledge (destroy the crates here). 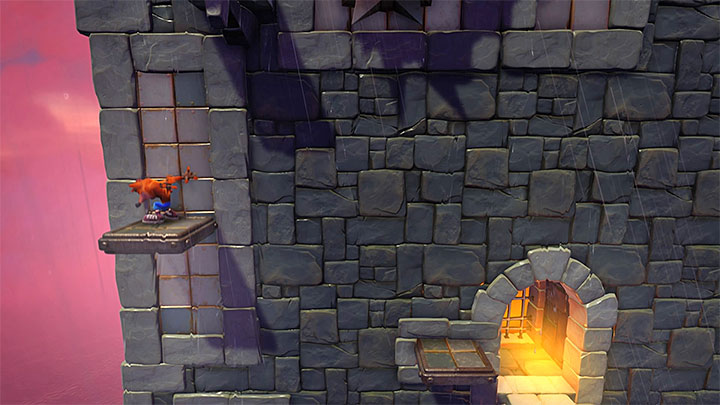 You end up in the location, where there is yet another demanding path to follow. Stop for a moment and take a look at the mechanism of unfolding stairs. You will have very little time to get over them, so climb up right after you jump onto them and jump onto the platform. It will start to travel up.

On the next floor, there is another unfolding staircase and again, you will have to wait for the right moment to jump onto it. Make it over higher up and destroy the crates there.

Get ready for demanding jumping. You have to jump onto the platform, then onto the big bird and then, bounce off it to land on the moving ledge shown in shown in the above screenshot nowej ruchomej pÃ³lce. 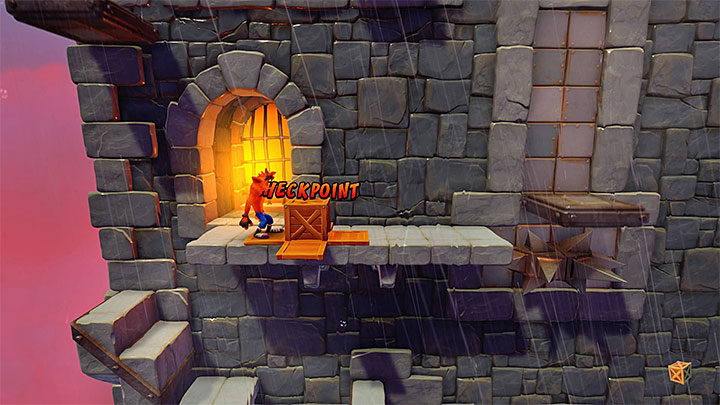 Continue up, jump onto the ledge at the right moment and QUICKLY run up the stairs. Here, you will have to jump between sliding ledges and this this is where you have to time everything perfectly. None of the jumps can be delayed, or else the platform will slide back. Fortunately enough, up ahead there is your much desired checkpoint (shown in the above screenshot).

Above the checkpoint, there are some more ledges moving and, after you land on each one of them, wait for a moment to familiarize yourself with the path and time your next jump well.

Take a ride up on the lift and watch out on the stairs, because only a half of it is completely safe. On the right, there is a scientist tossing vials. Fortunately, they are easy to avoid, and you can eliminate him with your standard attack. 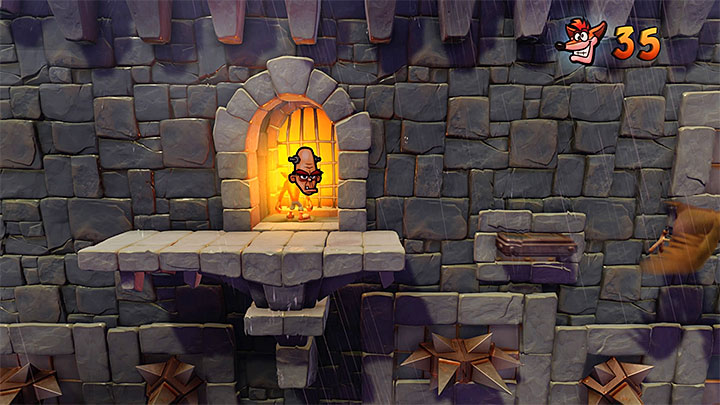 Stop for a longer while in the spot where the opponent used to stand and take a look at the situation on the right. Your task now is to jump onto the unfolded stairs at the right moment and to QUICKLY jump over onto one of the moving platforms. Keep going right and jump onto the large birds and moving ledges in turn.

On your path, explore the recess shown in the above screenshot, because there is Nitrus' second token. Go right and watch out especially for the prisoner in a single cell - you cannot use Spin attack too late here. 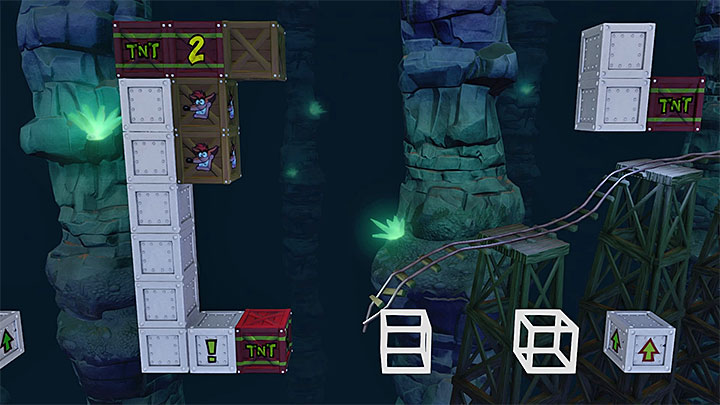 Jump over the birds and reach the portal to the bonus round (the last Nitrus token is right next to it). This stage is difficult. At the beginning, you have to activate TNT crates skillfully and get away from them quickly. The most difficult fragment has been shown in the above screenshot. Here, jump onto the TNT crates up above and, after countdown starts, return onto the metal crate on the left (the one with the arrow). This way, you will lose two extra lives, but it is safer than reaching the exclamation mark directly.

Wait for the explosions before you catapult yourself to the right. Land on the metal crate with the exclamation mark and only after that, start jumping over the crates to the right. Finally, take a long jump towards the last platform.

After you return to the castle, start jumping over the moving platforms and big birds. Along uyour path, there also is the last recess with crates (one with an extra life among them). A bit ahead, you will have to perform a triple jump onto three big birds. After you reach a stable platform, eliminate the second scientist and then destroy ther last wooden crates around. You cannow use the portal.