This is a relatively demanding stage and the most irritating obstacle is that to reach some of the crates, you will have to backtrack to the previous parts of the factory. This increases the probability of making a mistake and the necessity to replay the majority of the mission. 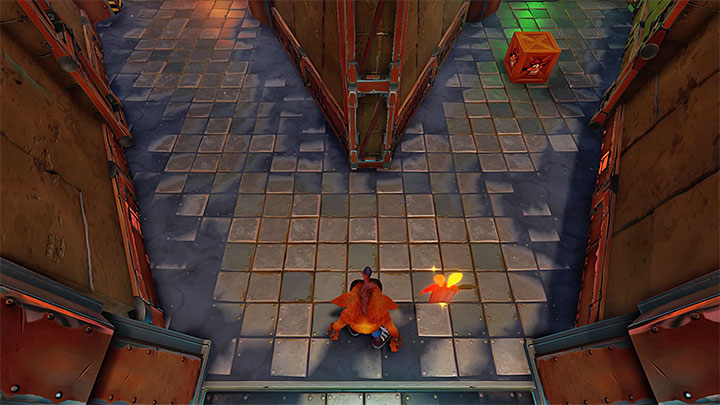 Nearly immediately after you start, you will encounter a completely new type of threat - electrified posts with current flowing between them. Do not attempt to destroy them and wait for the opportune moments to jump over to the other side safely. It goes without saying that, both here and in all the stages to follow, you also have to avoid contact with green toxic waste.

Soon, you will reach the first fork shown in the above screenshot. First, go left. While following the path you will encounter a gunman for the first time. Hide quickly behind one of the covers and approach the opponent while he is reloading his weapon. Spin attack will let you eliminate him. 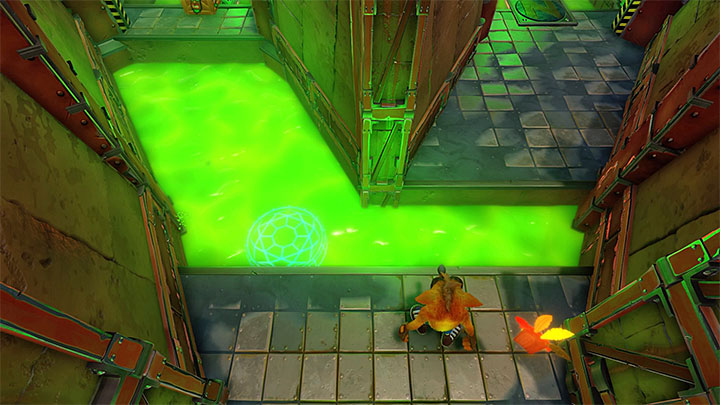 A bit further (and at the right moment),hop over a cluster of hot pipes. Soon, you will reach another fork shown in the above screenshot. You cannot explore the left path for now, because it requires you to have the blue gem. Just to remind you, you obtain this item for completing the Toxic Waste perfectly. After you obtain the gem, a moving platform will activate here. Jump onto it, avoid all the traps on this path and smash the crates. After you have cleared the path, return to the second fork along the same path.

The right path of the second fork is readily available. Nearly immediately, will you have to avoid two flying robots with spikes. A bit ahead, you will find only one crate. 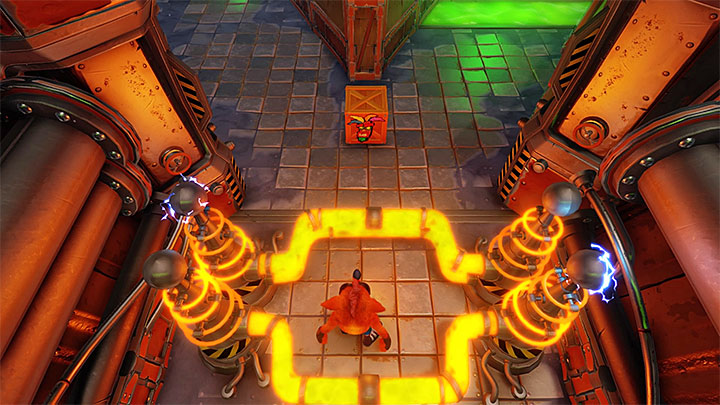 Return to the first fork now, i.e. the one that you have reached at the beginning of this stage. Since you have already explored the left leg, pick the right one. Take a long jump over the vat with toxic waste. Activate the checkpoint and reach yet another fork, exclusive to this path. It has been shown in the above screenshot.

It is a good idea to start with the right leg here, because this is a dead end. Take the stairs, of some sort, and reach the location, where there is yet another gunman. Just like earlier, wait for the opportune moment to leave your cover and eliminate him. After you have killed him, hit the metal crate with the exclamation mark (you will learn about the results of this action later) and additionally, destroy carefully the crates surrounded with TNT.

Return to the fork and take the left leg. Walk around the two flying robots and reach the location that you have already visited, where two path converge into one. 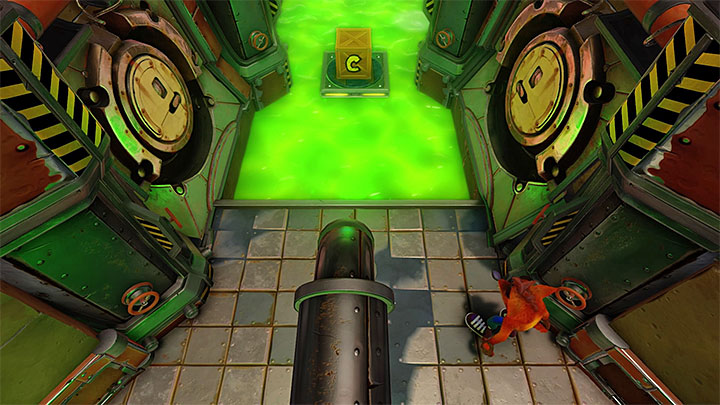 You should now be in the location shown in the above screenshot. There is one more path to explore which goes up, in a straight line. Jump onto the first platform surrounded by toxic waste to checkpoint. Take the ride on the moving platform and, at the right moment, jump towards the stationary one.

In the next section, pay attention to discharges, although it is not too difficult to avoid them. What's more problematic is jumping over the hot pipes. 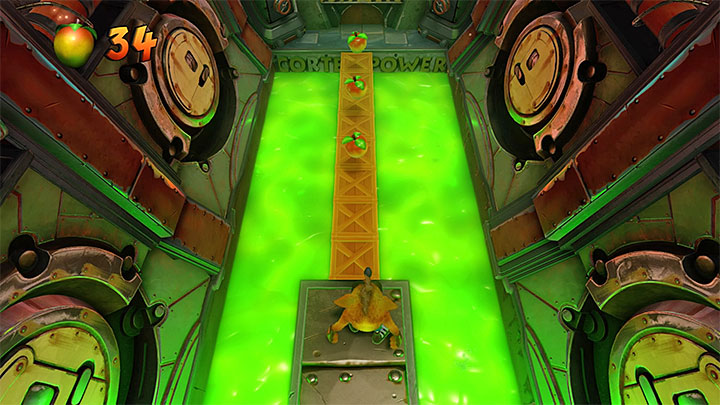 Soon, you will pass by the area where the paths come together again, i.e. the one that you are currently following and the one that requires a blue gem.

Head towards the upper edge of the screen. In the spot shown in the above screenshot, there should be a bridge of wooden crates that you can jump over. If, instead of some of the crates, there are only empty frames, this means that you haven't hit the metal crate in the other path (where there used to be the gunman). Enter the final chamber, smash the rest of the crates and take the portal.