This stage is quite long and finishing it may be quite a problem, because you will encounter here new types of traps and enemies. Apart from that, it heavily relies on exploration, because you can find there as many as 90 crates and unlock two bonus rounds. 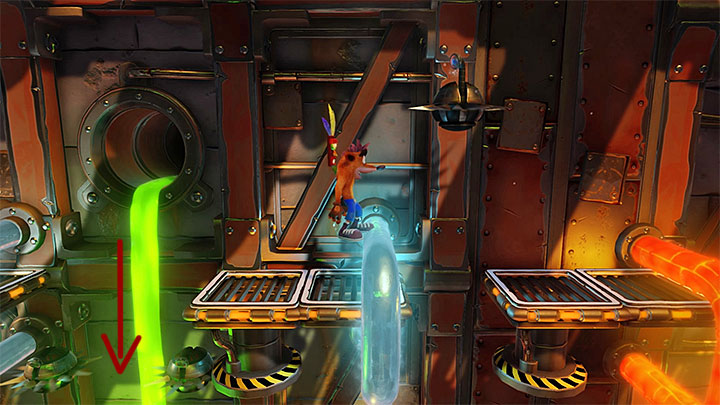 Virtually, from the beginning of this stage, you will have to handle all kinds of robots. The "crawling" robots practically pose no threat and toy can eliminate them by jumping onto them, or using the Spin attack. There also are two types of flying robots. Ones with cameras can be simply destroyed, whereas the ones with spikes pose a deadly threat and, although they can be destroyed with Spin attack, it is better to avoid them altogether.

Quickly you will encounter your first trap. Novelty here are red-hot pipes. You cannot touch them or Crash will die instantly (unless he has been protected by the mask) What is interesting, you do not have to worry about blue pipes that are completely harmless.

On your path right, take interest in the chasm shown in the above screenshot, where you will spot two hovering robots with spikes. Here, you can jump down, but make sure that you do not impale yourself on one of the spikes. Down below, there is a secret area, where you find, among others, the first token with Nitrus Brio's image. After you have collected all of the collectibles, use the elevator to return to the main path. 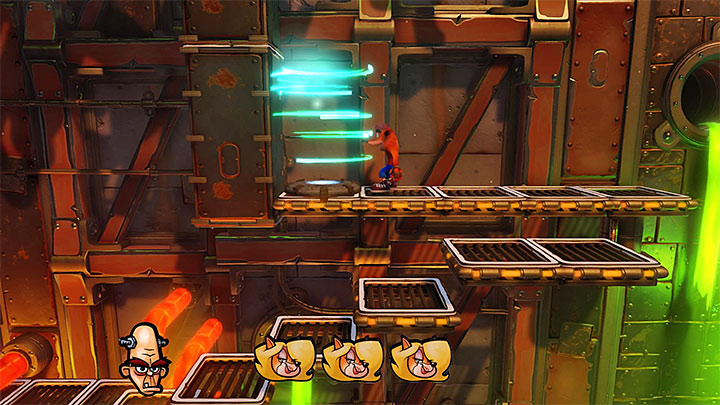 Continue to the right and remember to keep an eye out for more tokens because, at the beginning of this stage, you can also find a Tawna's token and the second Nitrus Brio's token. A bit ahead, you will have to cross several conveyors. If necessary, lean the analog stick in the opposite direction to slow down or go the other way. This is important, because there are hot pipes and flying robots around.

Reach the new moving platform and, after the ride, head left. At first, it is not too difficult and you only have to focus on finding the crate with Tawna's second token. A bit ahead, you will encounter the first hot pipe, which exhaust hot steam at regular intervals. The pattern here is quite obvious - jump above each of the pipes at the moment, at which they do not exhaust steam.

After you take a ride on the moving platform to the left, obtain Tawna's last token. Right next to this place, the bonus stage starts (the above screenshot) and during that stage, concentrate mainly on telling the difference between red crates that can be smashed with a single hit, and crates with apples, which require five hits. 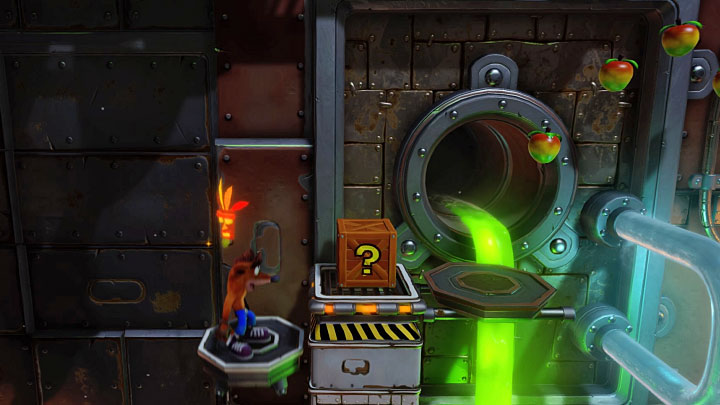 In the next section, take care while jumping over red pipes close to each other. Also, you have constantly to make corrections, because there are conveyors between pipes.

Take the lift to a lower level and go right. In this area, note the crate suspended high above, which can be smashed only if you bounce off the robot. In the next area, there are trampolines, thanks to which you will reach crates that are initially out of sight.

One of the following sections is much more difficult, because you will have to start running over pipes that activate in turns, AND jump over red-hot pipes, while running. Expect more fun in the spot shown in the above screenshot. In this part of the factory, you gave to take rides on the moving platforms. The difficult thing here is that during each ride, you will have to jump over pipes. You should be most careful while approaching the red pipes, which under no circumstances can you touch. 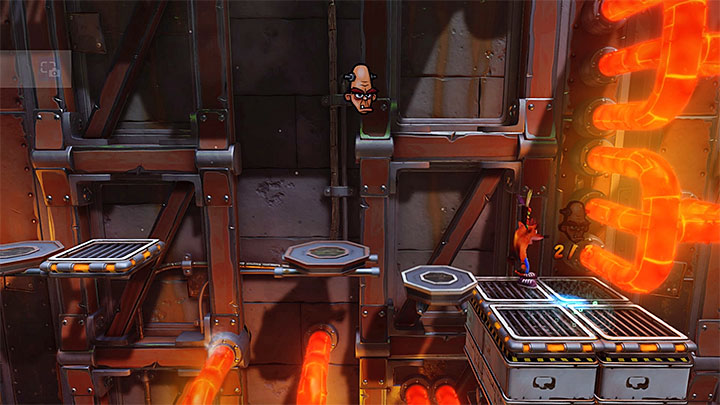 While exploring this part of the factory, stop on the larger ledge to the right, shown in the above screenshot. There, you will find the last one of Brio's tokens, as well as a portal to the bonus round. This one is very challenging and it assumes destroying 30 crates. During the round, start by jumping over the crates that you see, until you reach the one with the exclamation mark. As a result of interacting with this crate, more crates will appear (previously they resembled empty frames). Start jumping over them and you will reach an object with the exclamation mark on the left (you have previously passed it by, but it was unavailable back then). Interacting with the second metal crate will reveal the last set of crates and you will have to start going to the right (unfortunately, for the majority of time, you will not be seeing your character, so it will be much more difficult to land properly).

After you have completed the secret stage, jump onto the moving platform to proceed. You will reach a row of trampolines and try to bounce off each one of them, thanks to which, apart from obtaining some apples, you will also smash several crates with additional lives. The portal that ends this stage is at the very top.