This is the first stage where you can collect a colorful gem that is required to unlock secret parts of other stages. Obtaining it won't be easy, as various traps and enemies will be waiting for you in the Lost City. Furthermore, most of them you have not faced before. 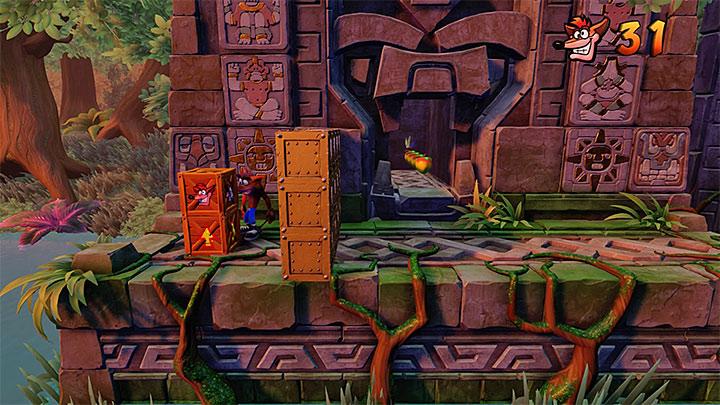 You will come across the first problem at the very start of the level - you won't be able to reach the crates that easily (see screenshot). The game won't let you just jump over the metal crates, and thus you will have to pass them carefully from the abyss side. It is highly possible that you will successfully perform the jump after a couple of attempts but once you get good at it, you shouldn't have any problems with repeating it.

Go right and watch out for stone blocks that will slide out of the wall and can push you into the abyss. Make sure to get rid of the lizard and search the small room, in which you will come across a crate with three additional lives. 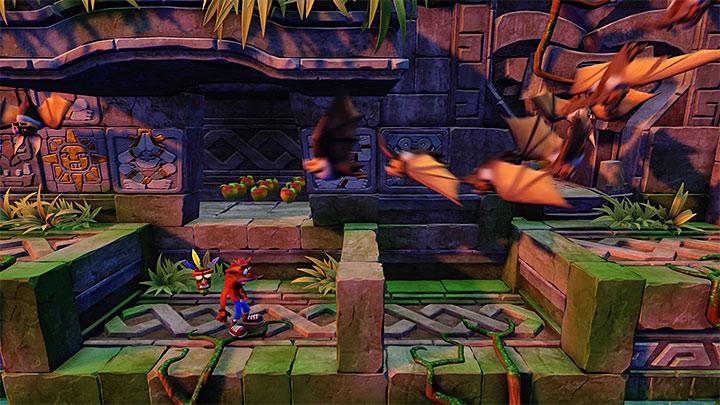 You will come across bats for the first time in another part of the Lost City. Don't try to attack them as it is highly possible that they will kill you and defeated foes are replaced with new bats. Hide in the lower parts of the screen, and let them fly above Crash (see screenshot). In order to stop them from flying through this part of the area, attack two hanging bats (one on the left side and the other one on the right one. First, you will need to make your way to the second bat).

Search niches that you will come across, as you will find Tawna's Token in one of them. On the other hand, one of the crates on the main path will contain a token of Nitrus Brio.

Move forward and avoid incoming bats. Watch out for stone blocks and pick the right moment to make your way through them. 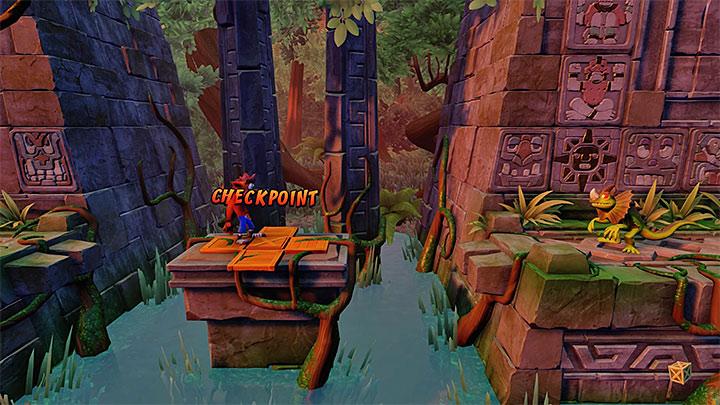 Stop for a moment at the checkpoint presented in the picture. The right part is protected by a jumping lizard, so wait for the right moment to jump on her and bounce from it. This way you will reach the second token of Nitrus Brio, located up in the air (and an additional life). Collect it and quickly jump left, so that you won't get pushed by stone blocks.

Now Crash will have to jump across small platforms appearing from the ground. Each of them will remain available only for a short time. If you make a mistake, you shouldn't die but similar traps from other levels will show no mercy. 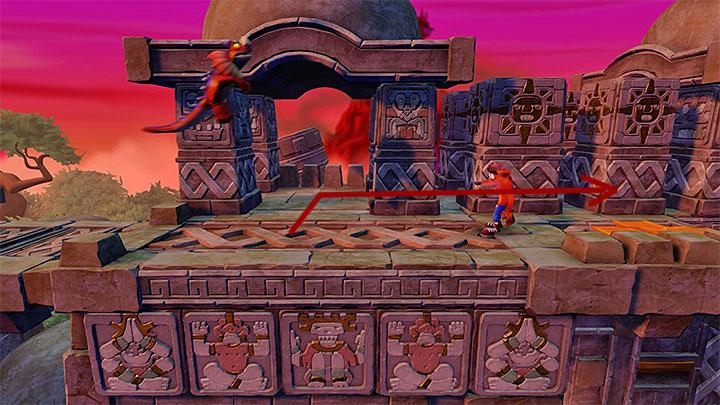 The portal leading to the bonus stage is connected to Nitrus Brio. You will find it once you are done with climbing. Don't worry, you didn't miss the last token. Go slightly left and go deeper into the screen (see screenshot and use the upper pad button). Turn right and reach new crates. The token is in one of them. The bonus round is quite difficult. In the first part you will need to destroy one "normal" crate and quickly run away from the explosive ones. There are 21 one crates that you will have to destroy, and 6 of them contain extra lives.

Move left and watch out for jumping lizards and bats. The area with moving blocks will be very dangerous. Stop before them and try to memorize the pattern. Proceed to the next group and repeat the procedure. You will come across another lizard, so bounce from it and reach another crate located up in the air. 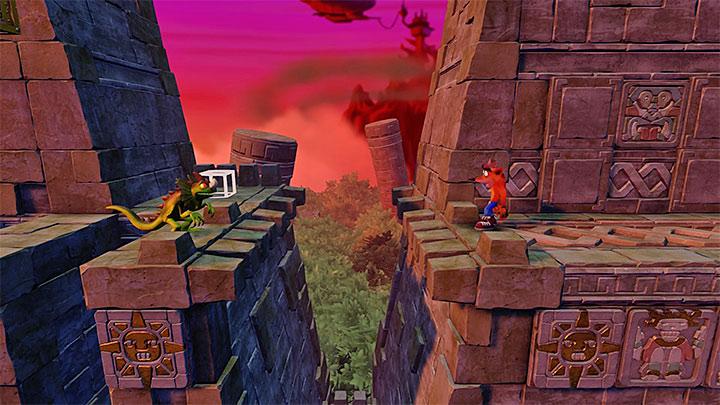 Soon, you should reach the portal that will take you to Tawena's bonus round. Here, you will have to destroy 33 crates, and those that contain apples will cause you more problems, as Crash will bounce between them fast. One should keep in mind that you will destroy them once you touch them exactly 5 times.

Get back to the main part of the Lost City and continue your adventure. Watch out for bridges that will bend under Crash's weight. Jump on their final parts just for a brief moment. You may only feel safe in the middle of a bridge.

In the final part of the stage draw your attention to the last lizard presented in the screenshot. You need to wait till it jumps left, get close to it, jump on it and quickly bounce from it to reach a metal crate in the sky. This will let you destroy some wooden crates located in the background. Nearby, there a portal that you can use to end this challenging level.