This is definitely the hardest level in the first island and it might easily compete with later levels when it comes to difficulty. The level features plenty of traps which in many cases force you to perform perfectly aimed jumps. Don't worry if you lose many lives at your first approach, it's completely understandable. Luckily, the level isn't very long, making repeating it for better results not so tiring. 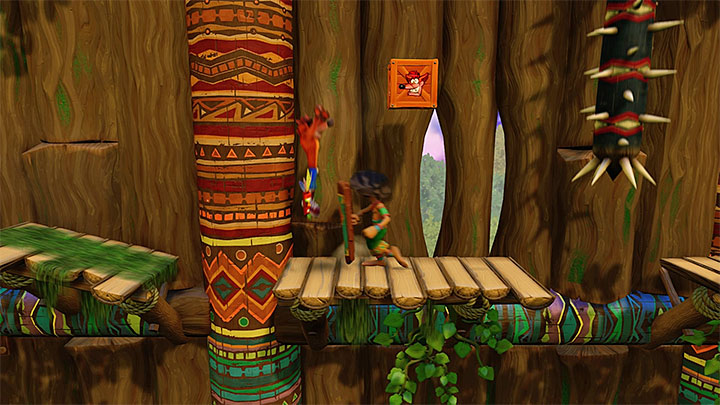 The beginning of the level isn't as hard as what comes next. During the climbing you must only remember to bounce from the turtle that is walking under a destroyable chest. In addition to that, you shouldn't rush yourself in the area with the rotating platforms. Set to the needed position only the closest rotating platforms. Avoid setting a few of them at once as you might not be fast enough to get to some of them.

One of the first really troublesome parts is the encounter with the native shown on the above picture. Here you should jump while still sliding on the slippery ground. This will enable you to avoid being pushed away by the enemy and to land on his shield instead, from where you can destroy the chest with extra life above it. 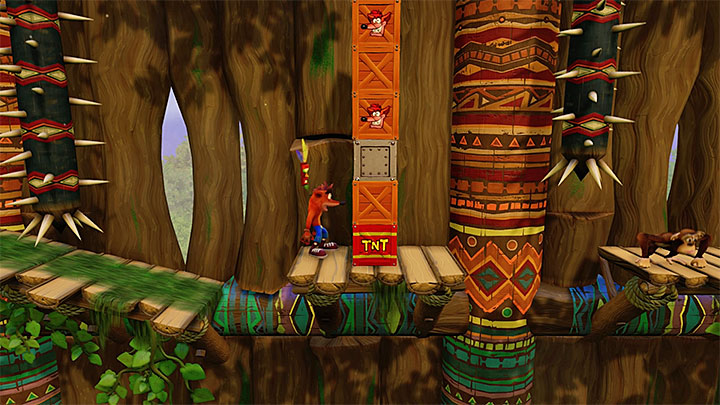 Continue your journey while avoiding spikes and flames. You will have a tower of chests to destroy (above picture) - notice that the bottom object is TNT. Try getting the two extra lives and then quickly jump to the slippery left platform. There wait for the explosion. Now you can move forward - however, do it only after the monkey on the near platform moves away.

Slightly further you will encounter the third token with Tawna's painting and you will be able to play bonus level. There are only five chests to destroy in the bonus round, but some of them are above a chasm (and you must catapult yourself to reach one of them). 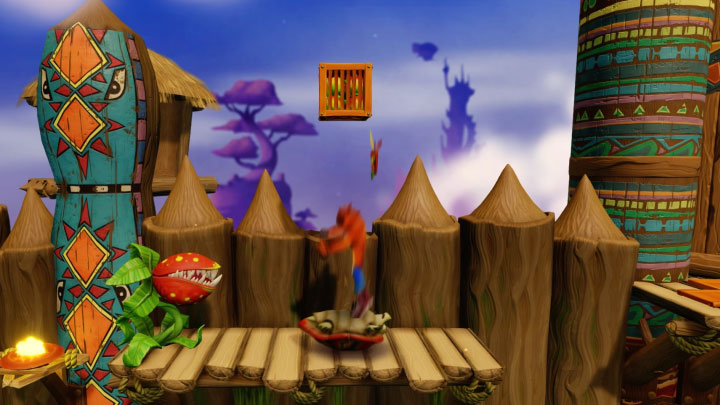 Complete another long climbing sequence that will take you to a checkpoint. Now move to the left - the hardest part of the level will start.

Soon after starting the path to the left you will have to bounce from the turtle shown on the picture in order to destroy the chest with fruits. Slightly further there is a native - you must be careful that he don't push you to a chasm as it will likely mean dying. During the journey don't forget that you can temporarily slow down on slippery ledges by moving in the opposite direction - this can enable you to wait for the right time to perform a jump.

Important - There exists an alternative path. After bouncing from the turtle in order to destroy the chest with apples you can hold up direction. This will take you to a secret area behind the palisade. By going to the left from there you will skip some of the traps (sadly it won't take you to the end of the level). 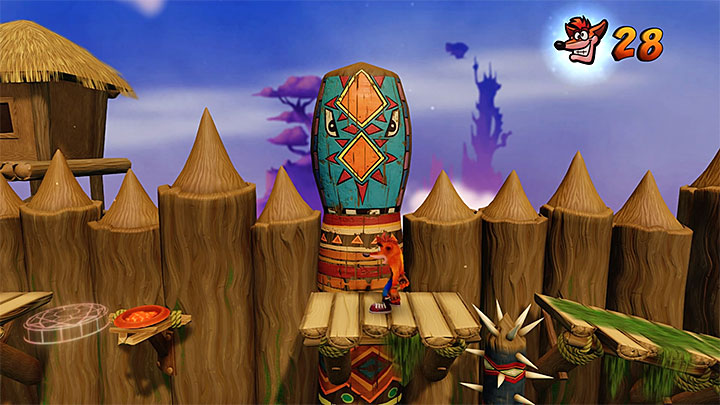 In the place shown on the above picture you can place the red gem - it can be unlocked by performing a perfect run (no dying, all chests destroyed) in Slipper Climb level later in the game. Using the gem will unlock an elevator that will give you access to a completely new area in the clouds where you can find additional chests. Once you find them all, CAREFULLY go back by using the same path. 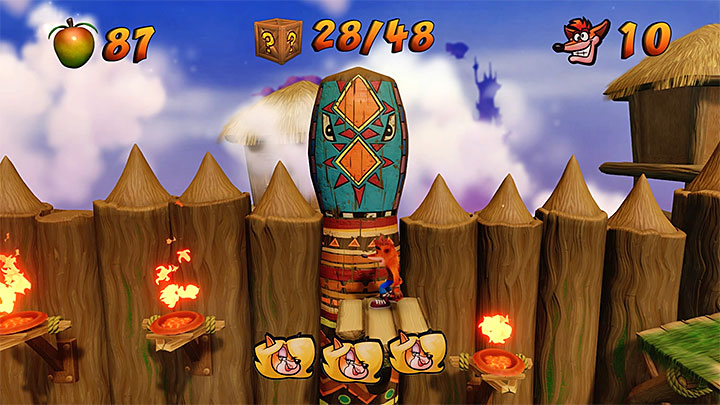 The hardest part of the level is after you unlock the last checkpoint shown on the above picture. There are three small platforms with flames. You must perfectly time jumping between platforms so that you leave before the flame burns Crash.

The last phase is very simple. Complete a short climbing sequence during which you will find three chests with extra lives. The last set of chests can be destroyed by landing on them with a long jump - luckily destroying them isn't dangerous.