The main hardship in this level is movement limitation caused by the fact that during most of the time you are surrounded by water. Each jump must be precise and you must time your landing well. 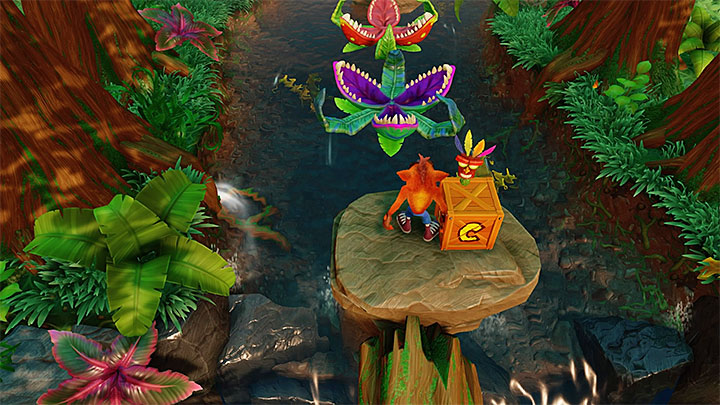 Instead of going forward, first go down the screen - you will find the first of three tokens required for unlocking the bonus level. Go up the river after getting it. Don't rush yourself - wait for the right time to jump between the large leaves and plants on the water. Keep in mind that some of the objects will sink into the water a moment after Crash lands on them - stay on them only for a limited amount of time.

One of the new enemy types in piranhas jumping from the water. They can be easily avoided and in some cases you can defeat them by using spinning at right time.

The carnivorous plants are more dangerous. They will be sticking from the water with their "jaws" open (as shown on the above picture). The red plants work like traps that activate when the protagonist touches them - you must quickly jump of them. The purple ones close in regular intervals. Jump on them after they reopen (and quickly jump off). 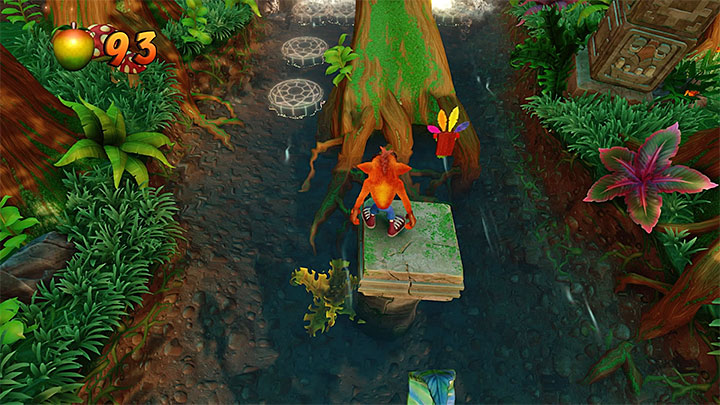 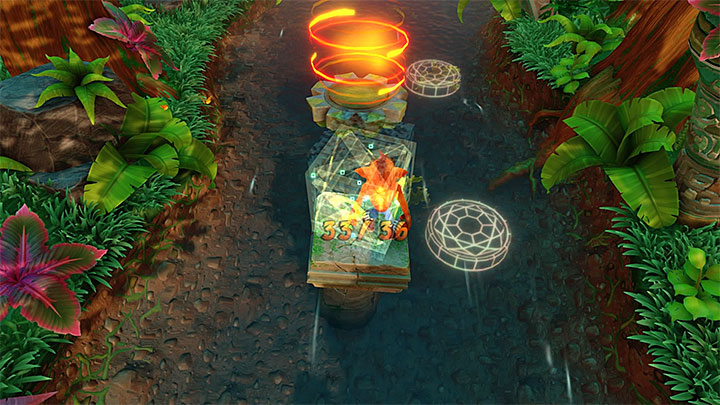 In this level you can unlock access to secret areas twice. It can be done in the places shown above (near the place where you climb on the slippery broken tree and near the portal that ends the level). To explore these locations you must have an orange gem - you can unlock it later in the game (it is given to you for perfectly completing Generator Room on Cortex Island). The second secret location is more important as it enables you to walk further up the river. After finding all missing chests you will reach an alternative portal that ends the level.

In addition to that, you should regularly collect Tawna's tokens as they will enable you to use the portal that takes you to a bonus round. This secret level is a bit harder than the previous ones - some of the wooden chests are floating above the chasm and you must perfectly aim your jumps to the right. The bonus round features 22 chests - two of them are extra lives.

Important - After completing this level you will fight Papu Papu - the battle is described in a separate chapter of the guide. In addition to that, you can visit Coco's Time Machine and add her as a potential playable character.