This level is more difficult than the previous one as it forces you to face more traps - some of which you will encounter for the first time. For example, here you will meet a local who can easily push you into a chasm if you aren't careful. 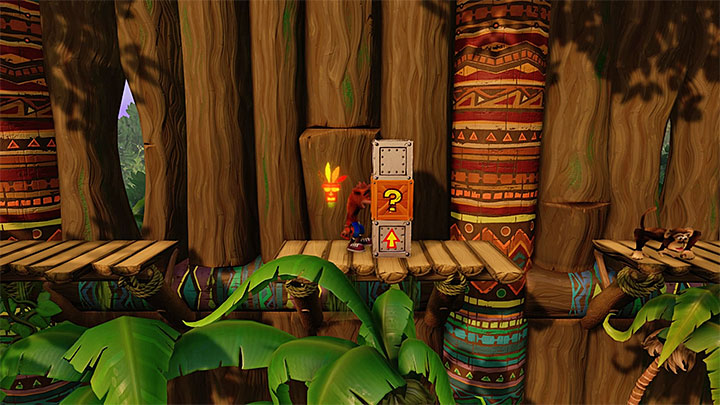 From the beginning of the level you will encounter metal chests that catapult Crash. Hold the jump button in the air in order to fly higher. Be careful in the place shown above. After destroying the wooden chest the upper one will start bouncing. You must time your jump so that you aren't crushed.

Slightly further you will encounter the first ape. These creatures are always running between the edges of the platforms and it is best to attack them (by jumping or spinning) when they aren't moving.

Another novelty is small rotating platforms. After hitting them with a spin attack they stop in a horizontal position for a short time - you must quickly use them to jump higher or you will have to repeat the whole climbing sequence. 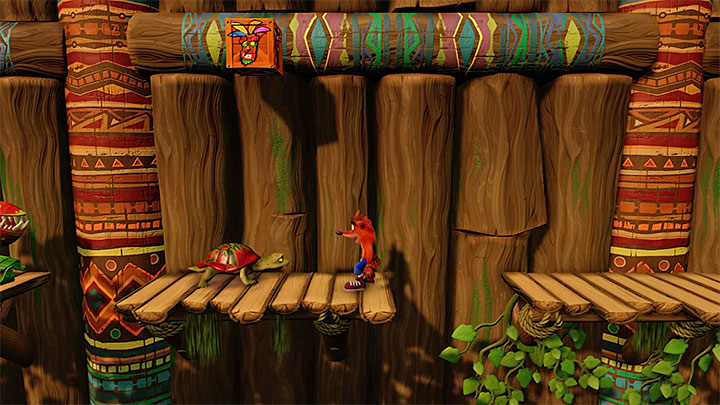 Notice the turtle shown on the above picture. You will encounter it later in the level. The only way to destroy the chest above the turtle is by bouncing from him. If you accidentally kill the turtle with a spin attack, you won't be able to reach the chest.

Soon you will encounter stakes with spikes. You must wait for an opportunity to safely move between them. 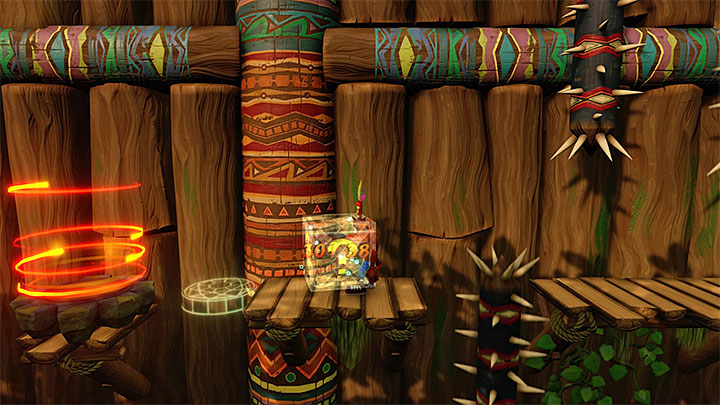 The locals that appear on this and further levels are very troublesome. If you try getting close to them in usual way, you will be hit with a shield and pushed back. This might cause you to hit a trap or fall into a chasm. You must jump on the locals. After landing on their shield you can use spinning to eliminate the opponent or you can jump again forward and ignore the opponent.

Another problem is slippery ledges (you can slow down by running in the opposite direction) and the places where sometimes you will see flames. On your way to the end of the level you should collect Tawna tokens - soon you will reach a place where you can use them to activate a portal and complete a bonus level. Perfectly completing this round will unlock 3 additional lives.

In the place where the level ends there is a spot in which you can use the yellow gem - it is presented on the above picture. A little reminder: this artifact can be obtained by perfectly completing one of the final levels in the game - The Lab. With the yellow gem you can skip the portal and reach a large secret area where you will find all missing chests. Important - While traveling through the secret locations you must watch out for new traps and enemies. You can easily die there.