It's a rather easy introduction level. You might only have some trouble with destroying all chests since some of these actions are performed above a chasm and even the slightest mistake while aiming the jump might end in Crash dying. 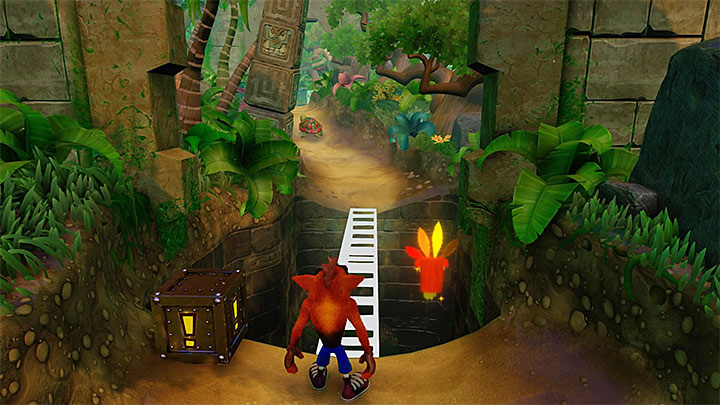 Remember to destroy all encountered chests from the beginning of the level. In case of the chests that look like they are hiding fruits you should jump a few times on them instead of spinning. You should also jump on chests with an arrow that points up. In some chests you will find Aku Aku masks. You can try collecting three such masks - this will make you temporarily invincible. However, since this mission is very easy, the masks won't be very useful.

In this level you will encounter your first enemies. Luckily, both crabs and turtles aren't very dangerous and you can defeat them by jumping on them or by spinning.

Further in the level you will encounter a crossroad. First you should go left where you must deal with turtles and break a few chests. Then go back to the crossroad and select the right path. You will reach the chasm shown on the picture. Jumping on the metal chest with an exclamation mark will cause a row of wooden chests to appear above the chasm. If you want to get the clear gem in this level, start jumping on the chests floating over the chasm. The jumps have to be very precise so that Crash won't die. If you don't want to take additional risk, you can completely ignore this path and focus only on reaching the portal that ends the level.