Below you can find information about the battle with Dr. Nitrus Brio in Crash Bandicoot, a game that is a part of the collection Crash Bandicoot N. Sane Trilogy. It's the fifth boss you will encounter in the game and you will have to face him during the late phase of exploration of Cortex Island, after completing a few missions from the visits in various parts of the castle.

In the first part of the fight Nitrus Brio is throwing green and purple vials. In order to complete this phase you must hurt the opponent six times. Once Nitrus has only 1 health point left, he will finish his last attack and transform into a giant monster. The second phase of the battle will start. 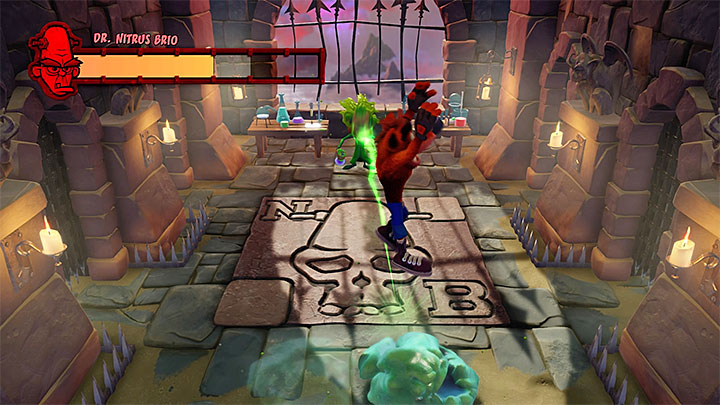 The green potions thrown by Nitrus Brio make monsters (blobs) appear on the level. Don't try using Spin attack to defend from them. Instead, jump on them - this will shoot a projectile at the boss (and it will destroy the blob).

At first there will be only one blob appearing on the level. Then there will be two of them and finally even three. When you face more than one monster, it is important to jump between one to another. This will reduce the risk of Crash dying from touching the monster after landing. 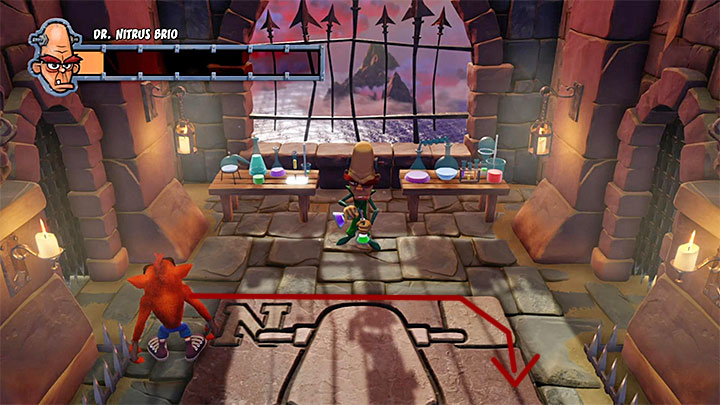 As for the purple potions, you must simply avoid them in the air and avoid the areas where they land and explode.

The most troublesome part is when Nitrus Brio has only 1 health point left. At that point he will throw six vials. You must be prepared for that. It is best to start in the upper left corner (above picture). Once the boss starts throwing the vials, go to the right, then turn down and keep running clockwise. 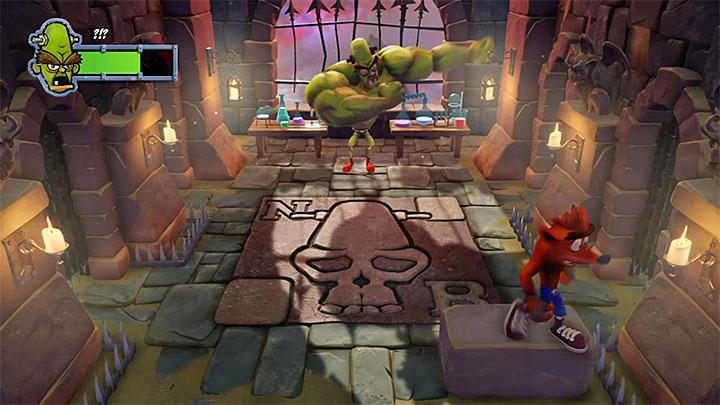 Jump on the stone brick and let the boss get close

If you survived the attack of the six vials, Nitrus Brio will drink a potion and transform into a green giant Hulk-like creature. Stay away from the boss and focus on the small stone bricks that will land in various parts of the arena. Jump on one of them and stay there, waiting for Nitrus to get close. 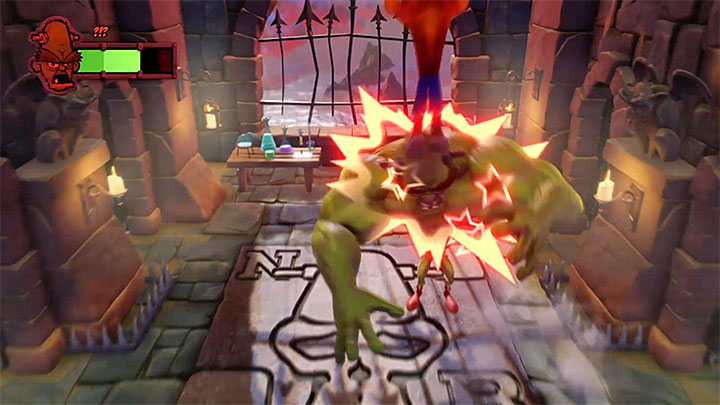 Jump on the head of the mutated Nitrus

In order to deal damage to Nitrus Brio you must jump on his head (the jump will be enough - you don't need to add spin to it). The key to success is jumping when the boss is close enough for you to land on his head, but far enough that he won't hit you with his giant hands. After a few attempts you should find out the right distance. In order to finally win, attack Nitrus three times.