The unofficial guide to Crash Bandicoot N. Sane Trilogy contains information helpful in completing all three games that are part of the collection. On the early pages of the guide there is a trophy guide that thoroughly explains how to obtain all trophies in each game. In the trophy descriptions there are pieces of advice related to requirements for unlocking them and how to achieve it. More advanced trophies are described in detail on separate pages of the guide.

The next large chapter of the guide focuses on describing all available levels. In the walkthroughs for levels there is information about potential threats, important treasures that can be found and alternative paths that becomes available after fulfilling specific requirements.

In the final part of the guide there is a chapter about fights with all bosses. In this chapter there is information about where the player will encounter bosses, what attacks they have, the conditions of battles and the best way to defeat them without losing lives. The guide ends with pages about controls and system requirements.

Crash Bandicoot N. Sane Trilogy is a collection that contains three classic platform games - Crash Bandicoot, Crash Bandicoot 2: Cortex Strikes Back and Crash Bandicoot 3: Warped. Each game was recreated from basics, but the gameplay principles and the layout of levels isn't different than in the classic versions of these titles. In these games the player is traveling through levels placed in various environments and filled with many traps, enemies and chests with fruits and other treasures. Each level is rather short, but the player is encouraged to keep repeating it in order to beat time trial high scores and to find previously unavailable treasures. 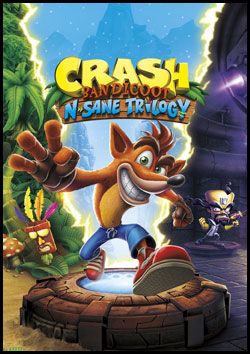 Crash Bandicoot N. Sane Trilogy for PlayStation 4 is a bundle of three classic platformers of Naughty Dogs team. It includes the first Crash Bandicoot, Cortex Strikes Back and Warped, all of which were remastered by Vicarious Visions studio, known from titles like Marvel: Ultimate Alliance 2, Skylanders Superchargers and a few other projects.
New versions of Crashs first adventures were completely remade. Developers did not simply overhaul its visuals, but created most of the content from scratch. This means redesigned levels, new textures and special effects, as well as characters models. Cutscenes were also modified, though they are still inspired by original versions.
However, Vicarious Visions did not stop there and added a new save system, letting players save manually or through autosave. Additionally, all games received Time Trial mode that originally debuted in Warped.