As we mentioned earlier, unfortunately, even in such an extended simulator there are a couple of simplifications and limitations (sometimes forced by optimization, sometimes gameplay).

Below, we list what you need to keep in mind when starting virtual work.

Slicing, form of meals and proportions

One of the most outstanding restrictions is availability of slicing - you can't cut fries the proper way, for example, because everything can only be sliced a certain number of times, and only small veggies can be sliced properly.

You can slice a potatoe six times. There's no way to do more.

This is most likely solved in such a way as to avoid the nightmare of optimization and software related to the shape analysis software of the elements of the dishes, and the developers have instead proposed a simplified mechanics that counts the amount and proportions counted by weight, rather than the shape of the sliced ingredients - as mentioned in one of the tutorials, as well as one of the notes from the last chef. (seen in the screenshot)

So you should assume that every ingredient (apart from sausage) can be cut not more 5-6 times, and this must suffice to achieve the desired result, or something near it. 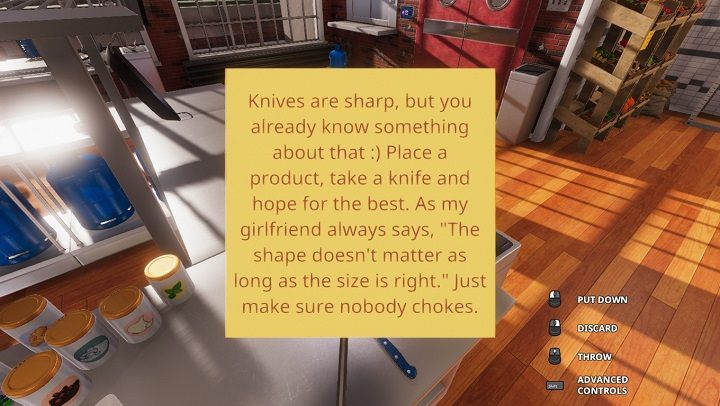 What's the desired result? This is specified in the recipe, which clearly tell us what portions (e.g. 20 grams each) of the given ingredient we need. It takes a little practice, but it's achievable - stick to the recipe and everything will be fine - usually a couple grams of difference doesn't make a problem.