On this page you can find a trophy guide to the Control - AWE DLC. We have posted detailed descriptions of all 11 trophies and achievements that can be unlocked in the Altered World Events expansion. By using our trophy guide you will be able to earn 100% of trophies available in AWE DLC expansion. 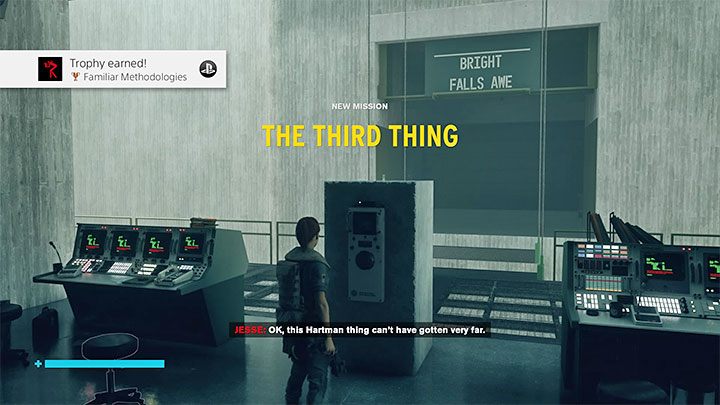 How to unlock: Fight off Hartman.

Comment: You must complete the first story mission of this expansion set - A Dark Place. We have prepared a detailed description of that mission in our story walkthrough. The achievement will only be earned if you complete the mission at the location of the Active Investigations, that is, not after driving Hartman away. 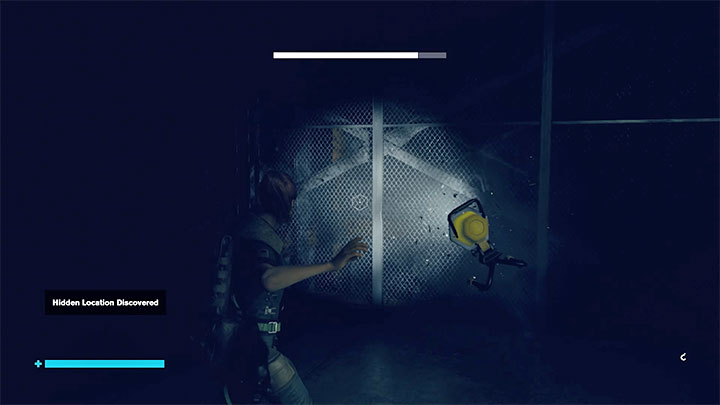 How to unlock: Find 80% of the hidden locations in the Investigations Sector

Comment: Hidden places were described in the Secrets chapter of our guide. In order to earn the trophy, Jesse must find four of them. The game displays a notification on the screen every time you find a new hidden place. 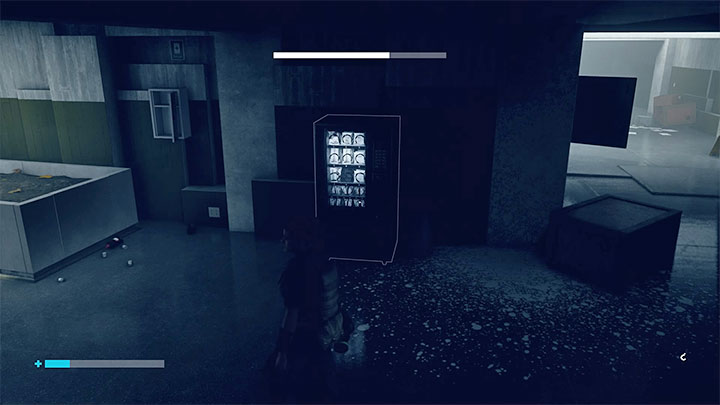 How to unlock: Destroy 80% of the Altered Vending Machine instances

Comment: This is the most problematic trophy of the AWE DLC because altered vending machines cannot be found in the same areas, that is, imposed locations of the game world. As you make progress in the game try to check every vending machine you find - the example is shown in the picture. In order to check what type of vending machine you have encountered use telekinesis ability and try to lift it up. If it is a normal vending machine, then nothing extra will happen. 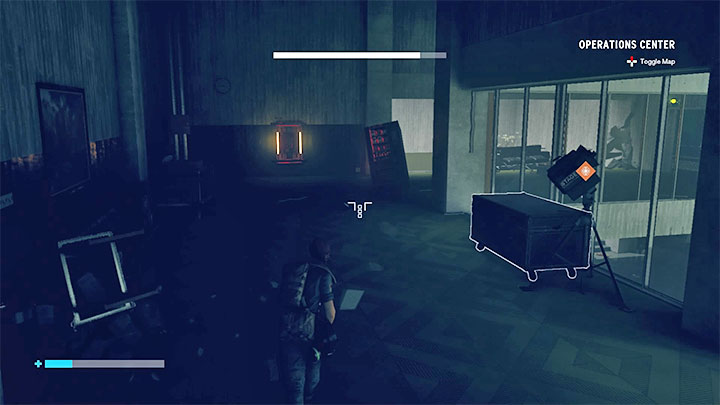 If you've come across a paranormal machine, it will start to glow red and... run away. Chase it right away. You can use offensive powers to attack the vending machine - levitate or surge and other service weapons. Any successful attack will cause the machine to drop some loot. Continue the chase until it is completely destroyed.

The important information is that the paranormal vending machine may be able to escape. You won't lose any chance of unlocking the achievement if that happens, but it may take you more time to earn the trophy. 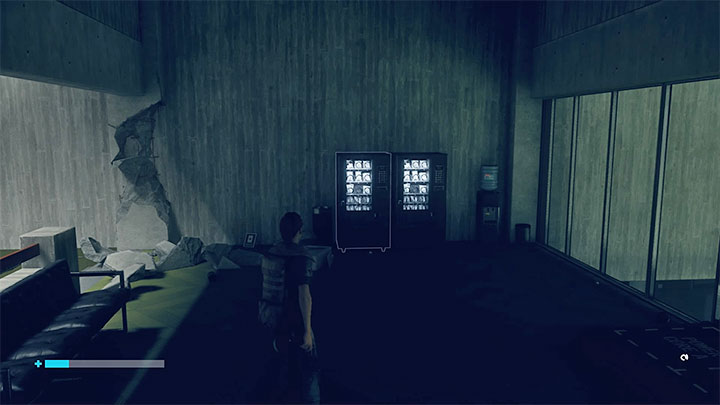 Paranormal vending machines are hidden in random places, and it is possible that you will find several of them in the same location throughout the game.

You can increase your chances of unlocking the achievement faster by visiting two locations with vending machines. The first location worth visiting is the Operations Center. There are a total of three vending machines on the floor. 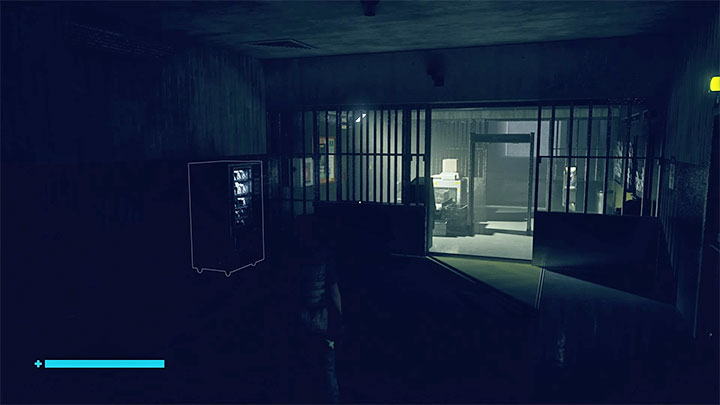 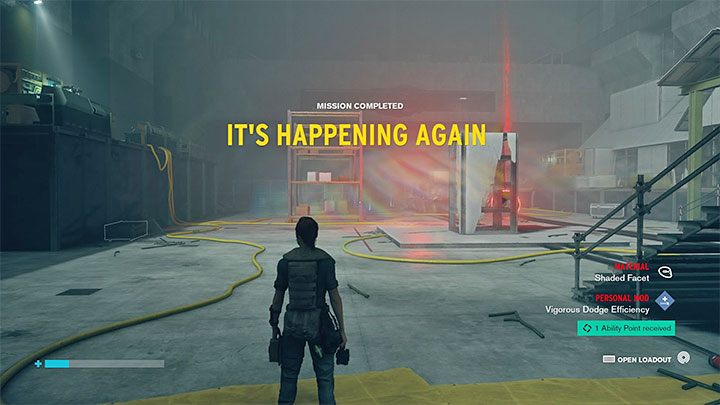 How to unlock: Defeat Hartman.

Comment: This trophy is being awarded for completing the final, that is, third story mission of the expansion - It's Happening Again. For the record, this is the final duel with the boss - Hartman. It takes place in the Bright Falls AWE location. 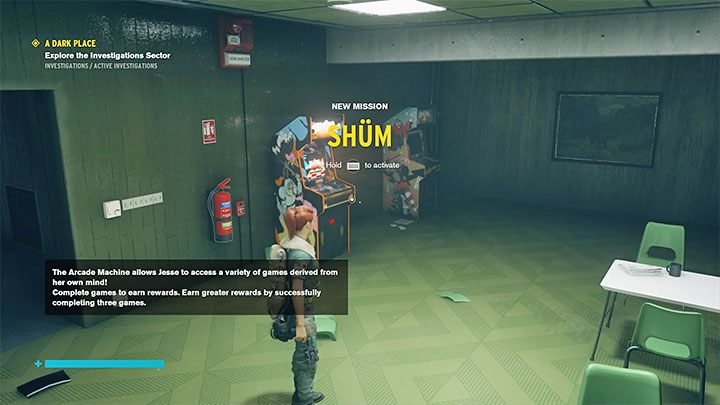 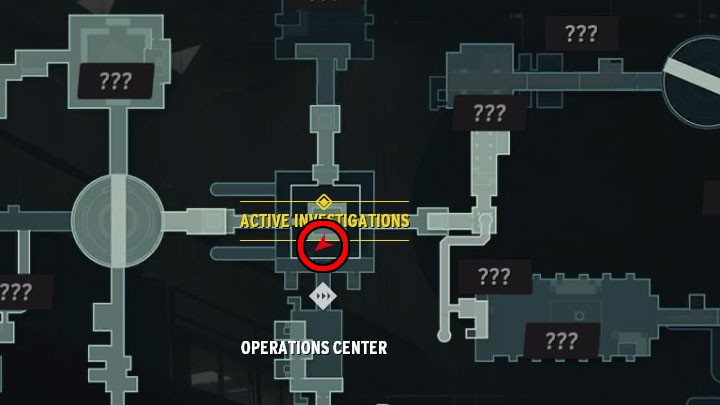 How to unlock: Play a single game in Arcade Mode

Comment: This trophy consists in using one of the vending machines found at the location of Active Investigations - this location is shown in the attached pictures. You can choose one of two games from the first vending machines. The entire arcade mode has been discussed in more detail on the page which contains a description of the SHUM side mission. 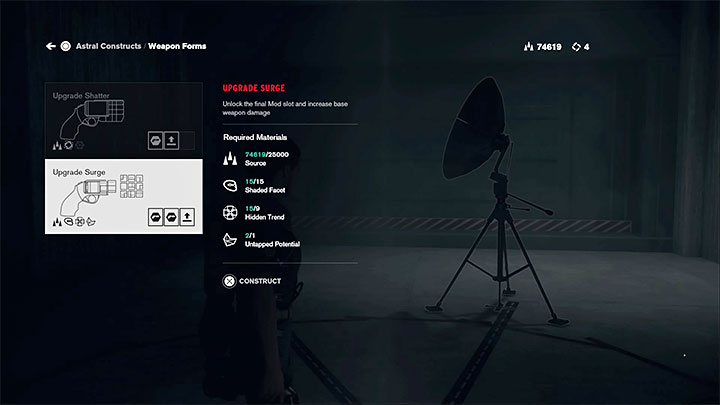 How to unlock: Upgrade Surge to the maximum level

Comment: The Surge is the name of a new variety of service weapon that you can construct by visiting any checkpoint and by going to the Astral Creations tab.

In addition to building a Surge, you also have to upgrade it to rank 3. To buy upgrades in addition to the Source (the in-game currency in Control), you also have to sacrifice the crafting materials you find while playing through the missions of the add-on. First of all, try to open as many loot containers as possible and take part in all battles, including the optional ones, among other things, fight against a vending machine. Always reach the places where your enemies died to collect loot. 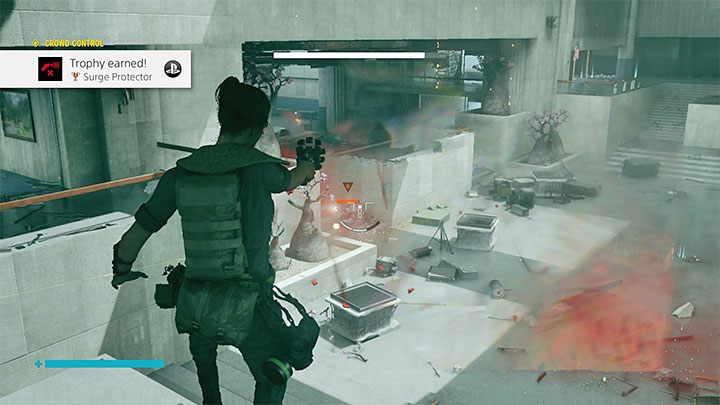 How to unlock: Kill 50 enemies with Surge.

Comment: It's a much simpler trophy than the one described above. After unlocking the first level of Surge, try to use the grenade launcher as often as possible. This way, you can primarily target ordinary opponents who can be killed by the explosion of a single sticky bomb (grenade). 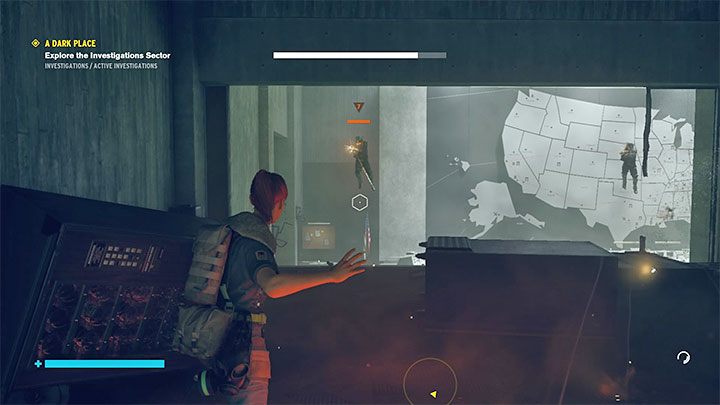 How to unlock: Kill 25 Airborne Rangers.

Comment: Airborne Rangers are a new variation of regular opponents appearing in this DLC. You can kill them in any way, such as with thrown objects or by using firearms.

If you haven't earned this trophy despite completing the add-on, go back to Active Investigations location, interact with the vending machine and load the Crowd Control game. At least a few Airborne Rangers will appear during the battle with the Horde. You can also, of course, try to go back to older locations, such as the Operations Centre. 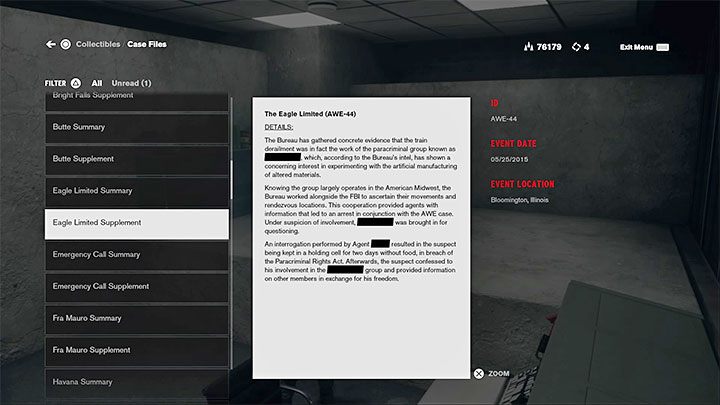 How to unlock: Find 80% of the Collectibles in the Investigations Sector

Comment: This is not a difficult trophy as long as you will remember to carefully search all the rooms you visit. If there are any enemies in a specific location, you should only investigate the area after dealing with them. Fortunately, there is no risk of destroying any secret.

Single collectibles can also be obtained automatically by completing main or side missions. 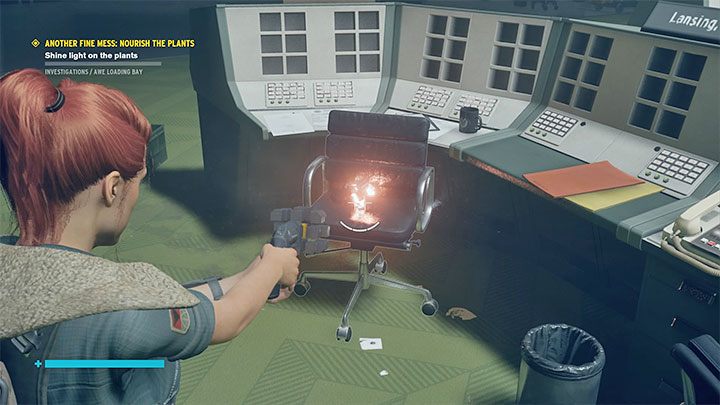 How to unlock: Attach a Surge grenade to an object and Launch it at an enemy

Comment: It's a simple trophy that you can earn almost immediately after unlocking the Surge weapon. When encountering any group of opponents, use a Surge to attach the grenade to some sort of object from the environment. In the example above, it is an office chair - it must be an object that Jesse is able to lift. 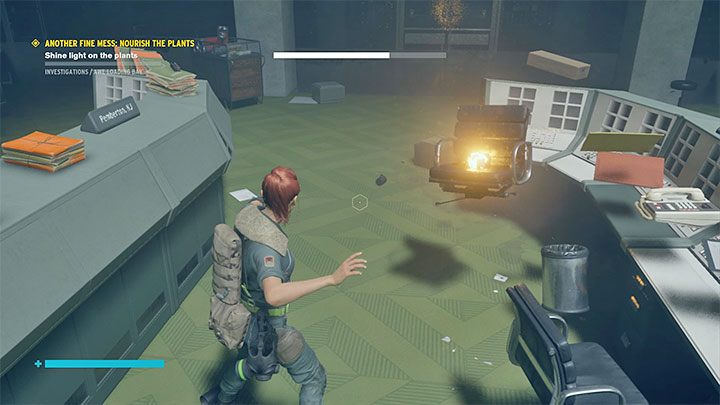 After preparing the trap, use telekinesis on an object with a grenade attached to it. Throw this object at any opponent. 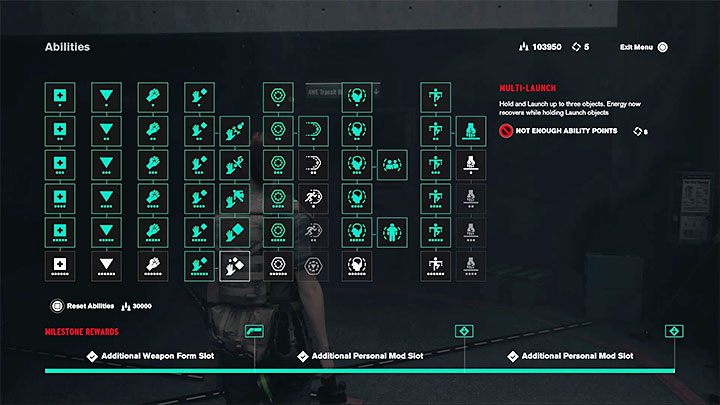 How to unlock: Use Multi-Launch to hit 3 targets.

Comment: The only problem with this trophy is the fact that the Multi-Launch is the last skill of the Launch tree. You must unlock previous skills and additionally spend 8 skill points to purchase Multi-Launch.

After you have gained the described ability, reach any location with a large number of opponents. Pull 3 arbitrary objects and position yourself in front of selected opponents so that after using the Multi-Launch each of them will be hit.