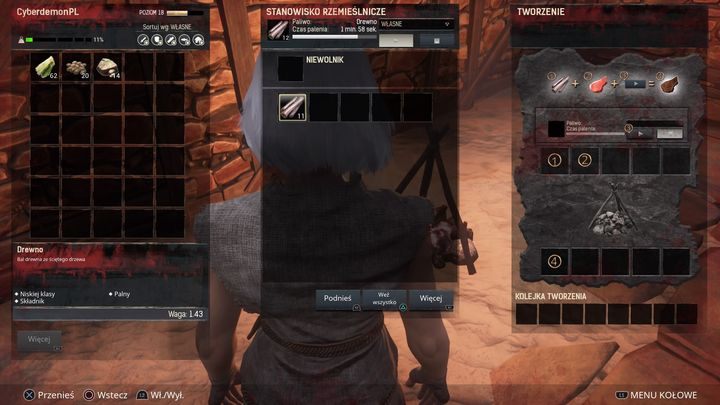 In order for a bonfire to burn, you need to provide it with the right fuel, such as wood or coal.

One of the basic elements in the game is to provide our character with appropriate nutrients and water. At the beginning of the game it is worth to move around the rivers and not to find yourself in a situation where our hero will fall out of thirst, because he or she won't have enough time to reach the source of water. In later stages of the game there is access to water pouches or wells, then the water is at hand even in less favorable circumstances. To replenish the water level you just need to approach the river and press the interaction button.

When it comes to food, it's a bit easier, because you can find food practically every step of the way. Without using any violence, basic food can be found in the bushes. When collecting vegetable fibers, there is a chance to come across worms that can be eaten without worrying about hero's health. You also obtain food from killed animals and people. After a successful fight you use a pickaxe or an axe and hit the dead body of our opponent. This allows the player to obtain, among other things, some meat. Raw meat can harm your character and lead to the death of the hero (at a later stage in the game you can develop a skill that does not cause poisoning with raw meat). In order to eat the meat without hesitation, you have to cook it.

Cooking is a very simple activity, because it requires a fireplace and wood or coal for this purpose. After creating a bonfire and placing it on the ground or in a room, just simply interact with it. Raw meat and wood are transferred to the middle column and the button corresponding to the start of burning is pressed. The ready-made food appears in a separate slot.

NOTE: You can eat human meat without fear after cooking it, and after unlocking the "raw skill" in the "survival" section you can eat it without prior preparation.

NOTE 2: Meat will deteriorate over time. The time remaining to the end of its validity can be seen in the menu after selecting the slots.

NOTE 3: Eating increases thirst. The more you eat, the more your character wants to drink and the level of the water marker drops.