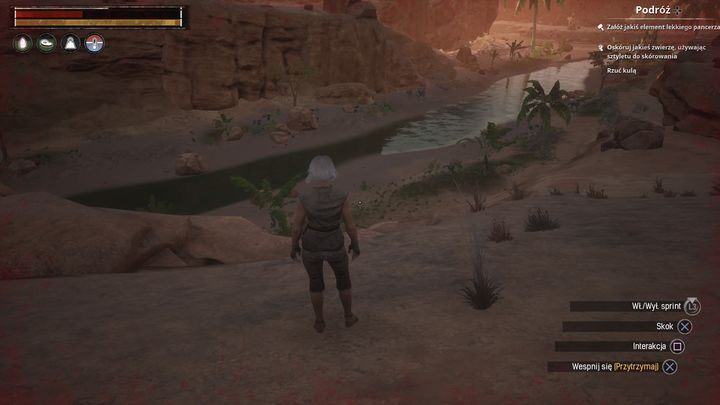 Better stay close to the water.

1. Creating a character - the first thing you need to do in the game is to create a character. You can choose from a wide range of features to add to your character. Apart from the external appearance, you can also choose the religion and origin of your warriors.

2. The very important thing is that from the very beginning of the game you can perform quests that are available in the "travel" menu. This is a kind of tutorial, because the game leads you a little by the hand. The tasks that are to be carried out include "support yourself on the rock", "kill your opponent", etc. By fulfilling these short quests, the level of your character increases and you receive development and skill points.

3. Collect raw materials - at the beginning of the game collect commonly available raw materials such as scattered stones, branches or plant fibers. You do not need any tools for this and the raw materials will be needed as resources to produce items, including tools.

4. Bush on the bushes - search for clumps of grass and dense plants, because in addition to plant fibers, you'll find worms there that are great food for the early stages of the game.

6. Pay attention to the level of water and food - two parameters that you must not forget under any circumstances. When the level of one of them drops to zero, your hero dies of hunger or thirst. Keep these parameters under control at all times.

7. Set up sleeping settlements quite often. In case of death, your character will be reborn at the place where the bed was last left. In the early stages of the game, spread out the simple beds as often as possible to avoid the situation that you are reborn in the desert for a long time.

8. Explore close surroundings of the water to avoid death from thirst. While in the later stages of the game you have water pouch, or you can build a well, at the beginning do not go too far from the water source. You will also find food there.

9. Eat often - food saves you from dying from hunger and gets your character regenerated. Once you have received the blows, there is no automatic regeneration to increase your life points. So you must eat after receiving some combat injuries.

10. Don't attack all the opponents you meet - it's important to measure your strength against your intentions. In a situation where the standard of living is quite low and you have nothing to eat with you - do not attack any settlements, camps or larger animals. It is better to avoid them than to because an easy victim fast.