Afterwards you will have to intercept the American tanks, which will attack from the left (west) wing, crossing ford (firstly he will of course bombard your positions). A 88mm cannon opposite to the ford, near the garrison (however you can also place it a little bit to the side), another anti-tank 50mm gun hidden on the right, a Nebelwerfer and Luftlande infantry with a panzerschreck, placed in the garrison. I think that I don't have to add that you should be working on defence in this place from the very beginning of the game, repelling the attack in the other regions at the same time? At this point you should have the ability to call in attack aircrafts, striking the enemy vehicles in the given area - but them for your experience points. Call in the places as soon as you see the enemy tanks incoming - repeat it a couple of times to destroy all of them. Use the artillery and of course, the Nebelwerfer if it's necessary. Remember that the Luftlande can repair damaged guns and that you can replenish units near the garrison building. 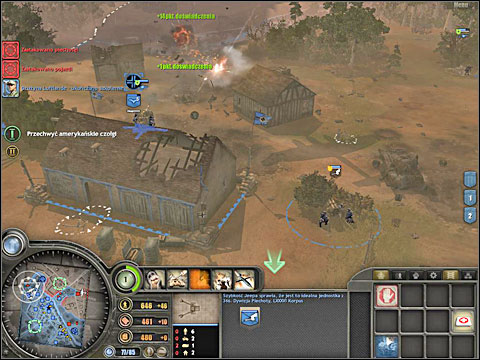 Finally it will be time to evacuate from Trun. However if you're interested in completing the additional and medal missions, you should hold off with the evacuation and defend the crossing by the ammo depot in the south-east corner of the map long enough for most of the "yellow", allied units to evacuate. You can see how much of them have already made it (149 people are required) on the left side of the screen, right next to the icon representing the medal mission. Unfortunately the evacuation takes quite some time, because, as you have probably noticed - most of the allied vehicles is damaged and moving very slowly. You can speed thing up by keeping a sapper unit by the route and repair some of the more damaged vehicles with them - that's my small suggestion. As for the Allies, constantly trying to attack and make it through the river - it's best to fight them as far from the route as possible - by the ammo depot. It's worth placing an armoured transporter equipped with a rocket launcher here, by which the German units can restock in members. The transporter can be equipped with a rocket launcher, to shoot the enemy infantry and vehicles - the button of the adequate improvement can be found next to the command panel. The Luflande unit can build a 88mm cannon post near the bunker, and as for the bunker itself - keep a machinegun section inside until you won't be able to use the mortar. Every infantry team in the area should be equipped with anti-tank weapons. Treat the incoming enemy (infantry and tanks) with artillery fire and of course mortar grenades and rockets. The Allies will at first walk through the wide pass between the forests but will grow wiser after a while and begin to cross the forest more to the left. It's a signal that you will have to get out of here quite soon. However, as for now, hold your positions. There are so many enemies moving in, that it's not hard to guess that they have a base nearby (in the north), where more units are being made. But whatever you do, don't move your units from the ammo depot (in order to attack the Allied base), because you will only weaken your defence and you probably won't be able to take over the base! 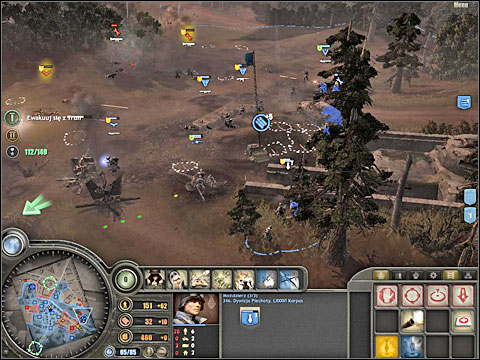 Instead I would suggest sending a single, camouflaged sniper, who has shooting out of his own will turned off. After a short walk through the forest (while avoiding the enemies!) he will surely bump into an Allied command vehicle, accompanied by a couple of tanks - in my game it was parked by the nearest garrison taken over by the Allies. Not all that's left is to approach the vehicle so that it will be in range of out sniper and... Call in a V-1 rocket strike. You can use it after buying it for your experience points and having enough ammo resources. Just look out no to get too close to the target, as the rocker really makes a big boom. If a miracle occurs and the target won't be destroyed, you can call for some artillery support or airstrikes, while eliminating the enemy sappers trying to repair the vehicle with your sniper. After destroying the target, the Allied attack should be a lot easier. 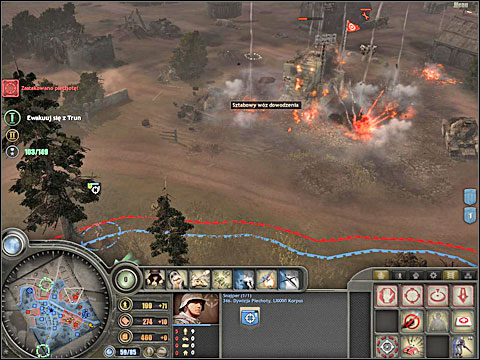 Defend both crossings (or at least the one near the ammo depot) and the fork in the roads until you are sure, that enough (149) of your allied units have been evacuated and the medal will be yours and only yours. 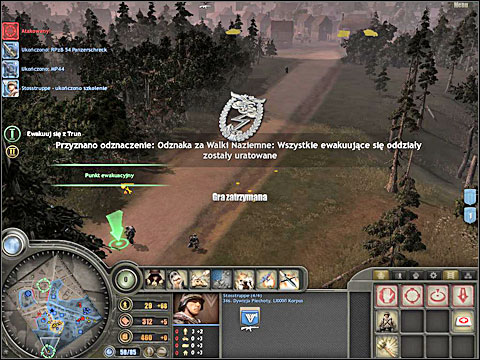 Afterwards you can think about retreating from the ammo depot area in the south-east and back to the south shore, to the old positions. Place the infantry in the buildings (also in the nearby garrison), the transporter between them (so that the houses cover its sides), do the same with the anti-tank cannons (you can build an 88mm cannon with the Luftlande, if necessary) and keep the mortar a little in the back. While retreating, you can throw some S2 bombs behind you (in fact those are mines) to make it harder for the enemy to chase you - you will get them from the support tree, using the experience points gained. 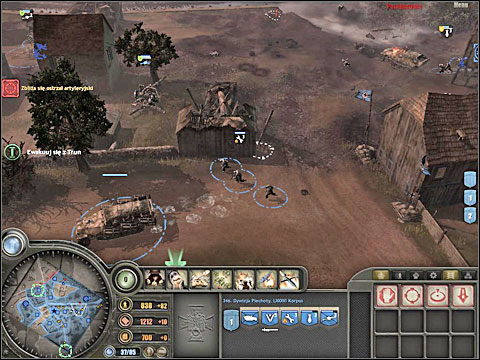 However some of the Allied forces can break through your defence lines and they will try to take over your garrisons. You can stop them in many ways - 1) calling in an artillery bombardment to the area of the garrison or even the building itself, 2) driving nearby with a Goliath and detonating it, 3) shooting them with rockets from the Nebelwerfer. Don't worry if the building won't make it - you will have fewer garrisons to take over, if you want to complete the additional task of regaining the garrisons. It's worth to take a look at who the building belonged to in the moment of destruction (to you or to the enemy) - it should be blue... That is German. 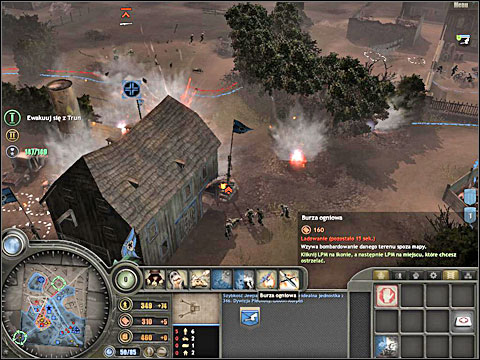 As for the additional mission mentioned before, that is regaining the garrisons, I think that it's best to complete it in the last phase of the scenario, after getting the medal and right before evacuating your forces from the map. I took over the garrisons beginning with the ones on the left (west) and by using two assault infantry units. There's probably no one inside the garrisons owned by the Allies, but sometimes you can run into some defence in the area around them. If the enemy has advantage over you, use an artillery support or use the "propaganda" bonus (the support tree once more), forcing one of the enemy squads to give up and retreat. Kill the rest of the enemies, quickly take over the garrisons and put your troops inside for a moment (for it to change colour to blue) and replenishing your men. Of course if you have some more men under your disposal, you can leave them in the garrison, for it not to fall into enemy hands again too fast. Oh, if the enemy will surprise you with an artillery bombardment, retreat your men to behind the building and take it over away from the falling shells. Similarly in case of seeing red flares and an warning icon on the left side of the screen (a mark that something will fall from the sky soon enough) while you're moving your men, quickly retreat to the nearest garrison and wait for the shelling to end, while filling up the gaps in your squad (if it's necessary). You probably won't have to take over some of the garrisons, as they were destroyed earlier - that's good, you will be done with the job faster. You can also destroy the garrisons you already own (they are blue), that are in your Nebelwerfers range - by doing so you prevent the enemy from taking them over and make your task even easier. 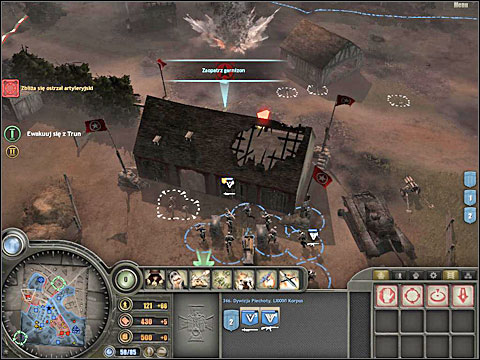 Once you take over every garrison on the north shore (I assume that you are in possession of the ones in the south) it's time to quickly evacuate from Trun, retreating your men to the end of the road in the southern part of the map. Of course retreat the ones you can - the 88mm cannons will fight until the end... 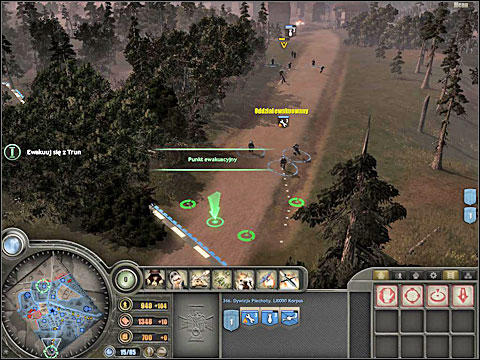