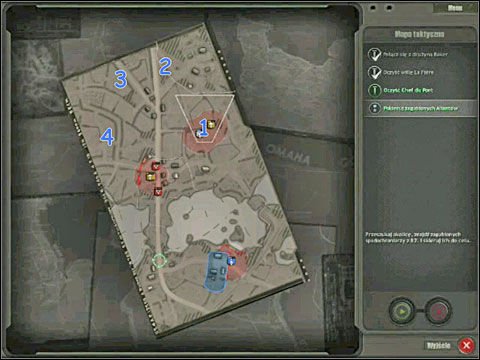 Now we will focus on the medal mission. You must find the other, lost Allied paratroopers and direct them in the right direction that is near the dyke and the bridge on the west side of the map. You can do it with one team, leave the second one near the road. Send the first unit to the place where the Able team begun the game. Afterwards go north, to the place that I marked with a blue 1 on the image above. Once you approach the small house, and arrow will appear right next to it. Get there and you will notice some American parachutists landing. After they safely land, approach them with your men and they will guide your allies (marked with a yellow sign) to the right place that is the village on the north end of the dyke (bridge). Go to every place that I have marked with blue numbers (2, 3 and 4) and you complete the medal mission. You will probably have to fight some German infantry, but they shouldn't be a threat to your men. Afterwards return to the team at the crossroad, using the same road as before (don't cross the dyke and bridge in the west!). 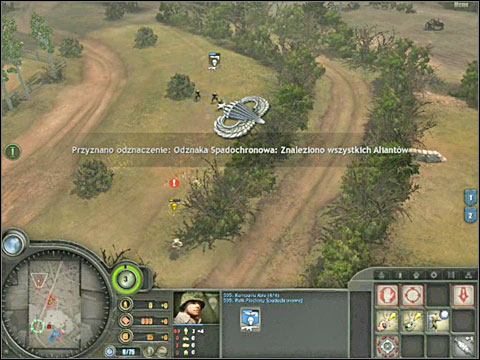 Your task is now to clear Chef du Pont, the south end of the pyre/bridge. It's located at the west side of the map - run there with both teams, through the mansion. Right after the gate, hide one team behind the entanglements blocking the road - they will shoot at the road and the field on the left. The second team can hide behind the haystack on that field for now. Kill some German units coming through that field. After that the second team can move right and kill some more Germans in the trench by the water, while the first team provides cover. If any of the soldiers falls, heal him only after the battle is over. Before you move to the bridge, heal all of your men. 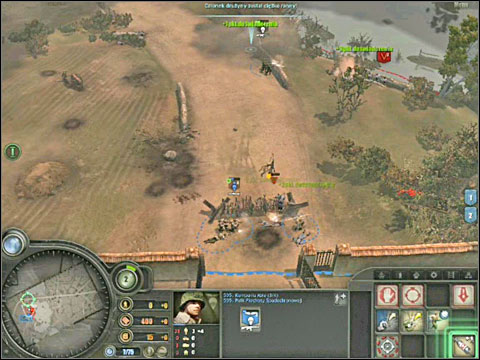 Of course don't forget to use the points you earn to upgrade your teams! Soon enough you will have to fight with some German armoured vehicles, so it would be a good idea to equip your men with adequate weapons - explosive materials that sticks to the armour of the vehicles. 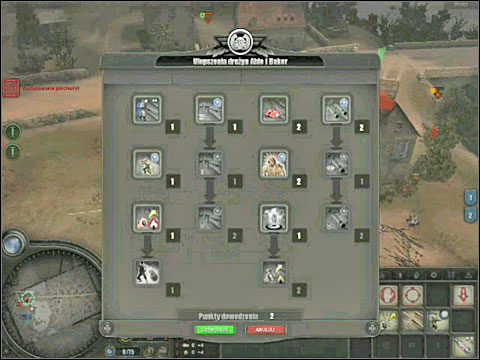 The area around the crossroad is full of enemies. Fight your way through them by running with one team to the field on the left (of course use the haystacks as cover) and getting to the nearest building on the right (firstly throw an explosive there) with the second one. The first team should throw a grenade at the mortar that was shooting at the courtyard a while ago - it's next to the nearby wall. After hiding the soldiers behind the wall and in the house, let them fight. Don't bother with the German trucks heading to the bridge on the right. It's alright if you manage to destroy some of them, but the other ones will just run into the American paratroopers who you helped before. Eliminate the Germans hiding behind the wall on the other side of the road with a grenade. 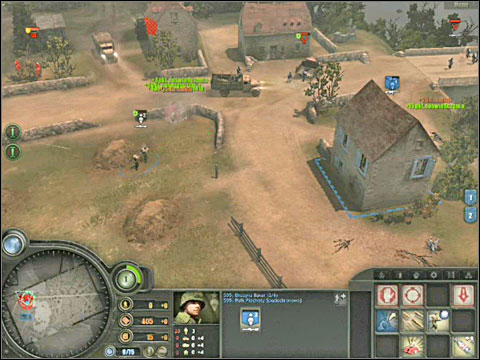 Once you get rid of the enemies, the American paratroopers will show up, saying that more German forces are coming in. You will receive a new task - organize defence and hold Chef du Pont. Place the team with Panzerschreck and the sticky explosives behind the roadside wall where the mortar post was. The German will attack from across the bridge, but some troops will also spawn on the shore, on the left side of the map, so you have to be ready for that. Your yellow allies will position themselves somewhere near your troops and help them fighting off the enemy counterattack. 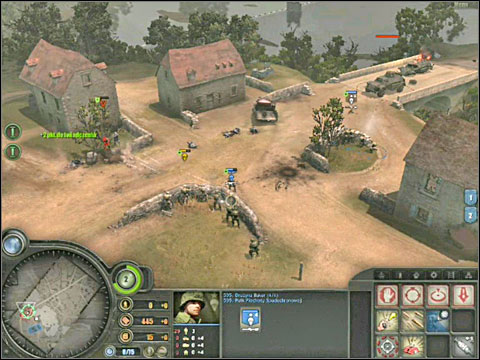 The task isn't too difficult. Destroy the armoured German cars with a Panzerschreck/bazooka using the team nearest the bridge. You can also run to the vehicles and plant explosives on them. Although right afterwards try to assure that your troops have sufficient, green cover - behind the walls or the wrecked vehicles.