After beginning the mission, choose the volksgrenadiers that are under your command, quickly pick up the weapons located in the white circles by the nearby building (panzerschreck and MG-42) and go to report at the church located in the centre of the map, near the big bridge. When you arrive by the sanctuary, you will receive a Luftlande unit. Switch to those guys, enter the fortification building menu, choose the 88mm Flak 36 cannon and begin building this wonderful anti-tank/anti-air gun in the place suggested by the game with the green arrow before the bridge). In the same time the volksgrenadiers should go and alarm the nearby garrisons (there's 14 of them all together) - the Allies are coming! 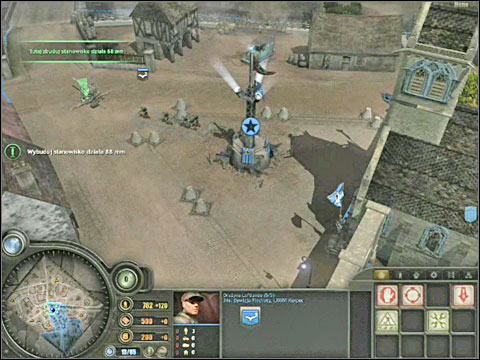 The garrisons are marked with yellow circles on the map. You're probably seeing just 3 at the moment, but even now it's quite easy to guess where the others are located. The buildings are nearby your allies marked yellow - cars and armoured transporters, sappers and machinegun units. To complete this task you have to run to each of the garrisons and place your men inside the buildings for a while. 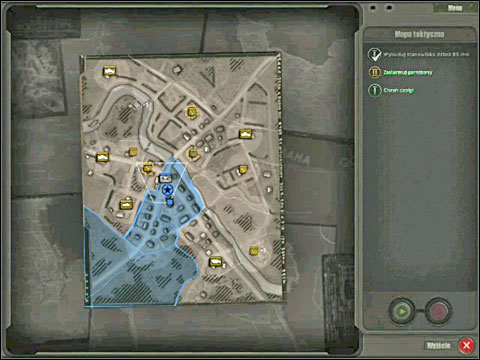 A blue icon will appear above the building and you will be given command over nearby units - the vehicles, sappers etc mentioned before. However, to make this task harder to complete, the creators came up with a sneaky plan - paratroopers will be successively landing on the map. Try to get rid of them using your newly gained armoured car and units. One team should be waking up the garrisons the whole time. 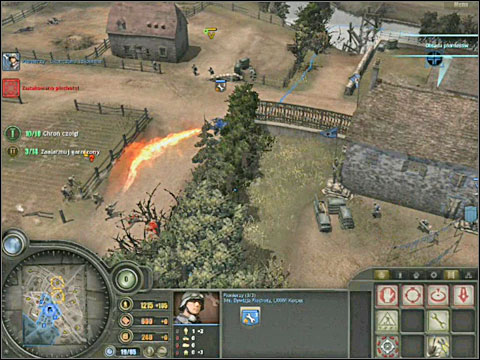 This has - apart from having more units under command - an additional advantage: as you alarm more garrisons, you receive the opportunity to recruit new units at the church ant the building behind it (at the courtyard). They're the same units that you have woken up. Make use of this and recruit some more infantry units. First of all, 1-2 Luftlande teams, as they're the only ones that can build a Flak 36 post - and they will come in handy in a while. Send the newly recruited units to the north, through the nearby bridge, equipping them with the weapons that you will find in the white circles (usually near the garrison) - you should collect panzerschrecks first of all. Let's return to the team that started building the gun post near the church at the beginning of the mission. Right after they finish, you should send them north through the bridge as well, in the direction of the crossroad where the Allies will soon appear. Don't forget to take over two strategic points located in the two opposite corners of the map. There is a massive mortar bunker near the ammo depot in the south-east - you will be able to aid your infantry with mortar fire if you take it over. I would suggest spending the experience points on the right branch of the tree - "fire storm", "V-1 rocket" and "Henschel battle planes patrol", so the ones that will come in handy while fighting off the Allied tanks. Remember not to recruit too much units as you must have some space left for the 88mm cannons. They will help you defending the German tanks located on the other shore (marked yellow on the map). 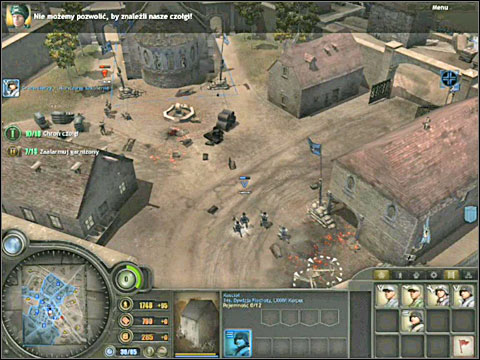 You should organize defence on this side of the river - first of all on the crossroad where the Allies will soon appear. The enemy can't find out about the German tanks! My defence looked pretty much like on the screen below: 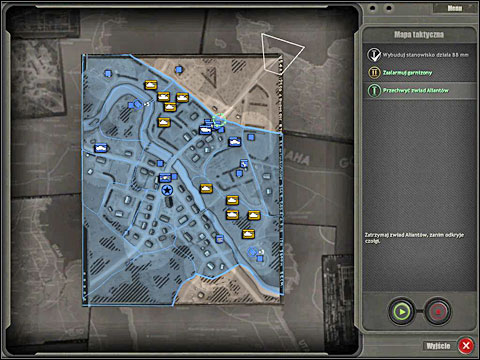 In the region of the crossroad marked with a green circle I placed a machinegun section and sappers (in the building on the right side of the road), infantry with a panzerschreck in the opposite building and a Luftwaffe unit equipped with a grenade launcher (behind some wrecked car). The last one can build an 88mm cannon post on the road between the buildings. It's very advisable, but if you won't make it in time at least have a 50mm Puma and a transporter that you can equip with a rocket launcher. You can also mine the crossroad, of course if you will have the time to do it. These forces combined with the garrison with grenade launcher equipped infantry inside and the armoured vehicle standing next to the building should be enough to hold off the Allied reconnaissance unit. 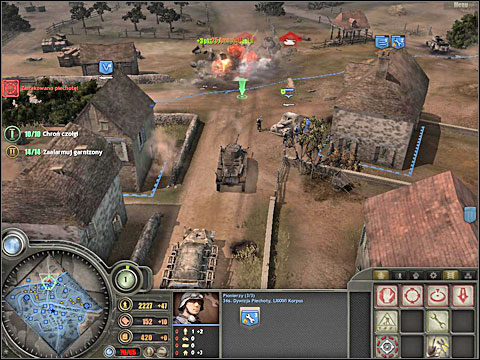 Afterwards the enemy will strike with tanks, sending dangerous Wolverine tanks into battle and... It can be quite hard. Even if the Allies will manage to get to the bridge, they will be greeted by the other Germans - infantry with grenade launchers/machineguns in the buildings and the 88mm cannon in front of the church. 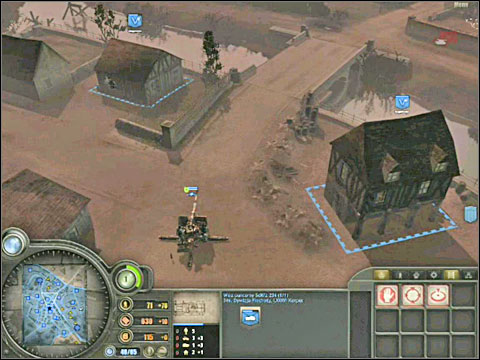 After a while the Allied tanks will also appear on the left wind. You absolutely need to have at least one, no, at least two 88mm cannons standing on the fields where the German tanks are. Your new task is to defend those tanks. There's just plain field around, so it can be hard for the infantry to find any cover. You don't have to build the cannons exactly in the spots that the games suggests - it's better to find a position for the gun behind a haystack or a wooden fence, that will provide some cover. If an Allied vehicle breaks through your defence, chase it (until it won't be destroyed) with an infantry unit equipped with an anti-tank grenade launcher. The allied "yellow" tanks should also wake up once they get attacked and answer with fire. Don't hesitate to use support - Henschel airstrike, artillery, or even V-1 rockets when you target a big group of enemy vehicles standing in one place for some time. 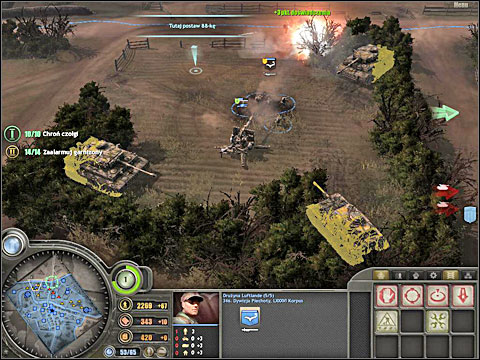 Eventually the Allies will also try to attack from the right. You should be able to hold them off with a 88mm cannon placed somewhere between the house and the roadside wall (this way the gun will be protected from the sides), sappers who can mine the road before the battle begins and later on repair the cannon and Luftlande infantry equipped with a panzerschreck and positioned inside the garrison (you can also use them to repair the gun). Luftlande can (of course after leaving the building) build another Flak 36 post, once the first one gets destroyed. Remember that you can also shoot with direct fire using them. Ultimately, the enemy will retreat. You will receive a medal if none of the allied tanks was destroyed, they are marked with yellow in the game (a pioneer unit can try to repair some of the more damaged tanks during the battle). 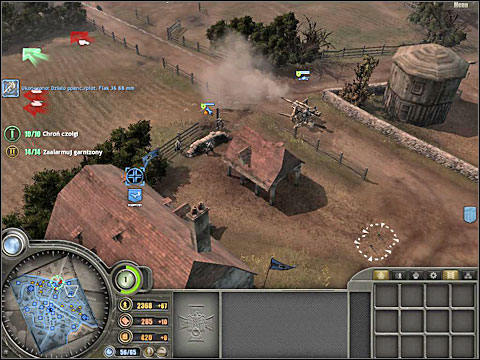