You have to escape from Villers-Bocage. The Tiger's crew will have to continue on foot, after splitting into two groups. As soon as the mission begins, use your squads to shoot the British infantry on the street, near the abandoned Tiger. It shouldn't be hard, as the crew is quite deadly itself, even without the tank. Use a team to pick up the guns from the street. After the fight, heal a wounded partner (if it's necessary) by choosing the corresponding button from the panel. You will find some additional weapons on the squares on the right and left, in the white circles. You can command your men to change their weapons if you don't like the ones they currently have. There are also ammo boxes on the courtyards. You can take the one on the left after destroying the mortar with a grenade/explosive material. A British tank or armoured car can appear - one of your teams can shoot it with a panzerfaust after sneaking to the enemy from the side or behind. After you take care of the enemies, it's time to move forward, to the north, in the direction showed by the green circle. I suggest you follow the right side of the main road. 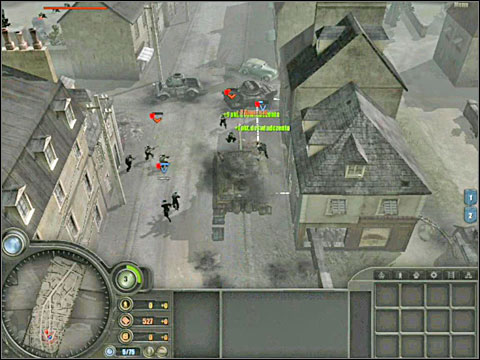 While you're going through Villers-Bocage you will bump into some British units, including an anti-tank gun on the crossroad, an armoured car a little bit further and a tank between the buildings on the left. However your teams can approach the enemy quietly and stay unnoticed until they start to shoot or get really close. Use this ability by pressing the adequate button and sneak to the wall near the anti-tank gun. You can greet the enemy with an explosive material from there. Afterwards I would suggest you retreat behind a nearby building, turn the sneaking mode back on and this time approach the armoured vehicles (each one with a different team). Use any available weapon you have to destroy them - panzerfausts, explosive materials. If you need to heal a heavily wounded mate, be sure there aren't any enemy troops nearby - healing under heavy fire isn't a great idea. Place your men behind the walls between the two (already destroyed) vehicles and throw an explosive material underneath the building occupied by the British infantry. After you deal with everyone, head forward. Stick to the left side of the main road, leave the village and head to the field with haystacks. 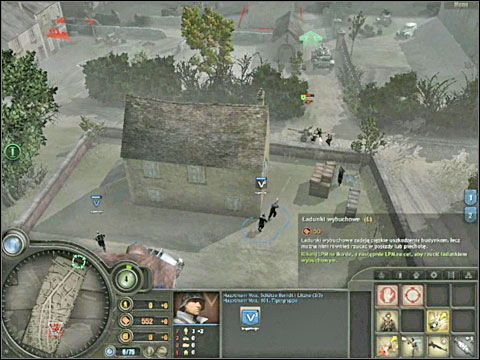 While on your way, check out the boxes nearby the building on the edge of the village. Once you're on the field, hide behind the bulletproof haystacks. Across the field there are lots of British troops, including a reinforced anti-tank gun post - first of the three that you're supposed to destroy if you want to yourself earn a medal. Fortunately your troops can use the radio to call in an artillery strike - use the proper button on the command panel. Use it now point the place where the British troops are. Try and get as many soldiers as possible into the white circle. Once the artillery finishes its job, go and kill the survivors. Afterwards go left towards the main road, in the direction of the crossroad. 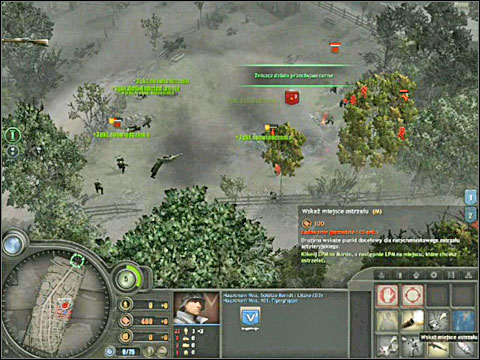 However before you reach it you will have to fight with some more British soldiers. Place your troops behind the fences. Use the first one to destroy the enemy jeep that will appear on the road on the left with a panzerfaust and using the second team destroy the post that's being built by the enemy sappers. In the end, throw some explosives underneath the building where the rifleman has hidden. Kill the survivors, pick up the weapons and ammo, heal your troops (if it's necessary) and continue towards the main road. 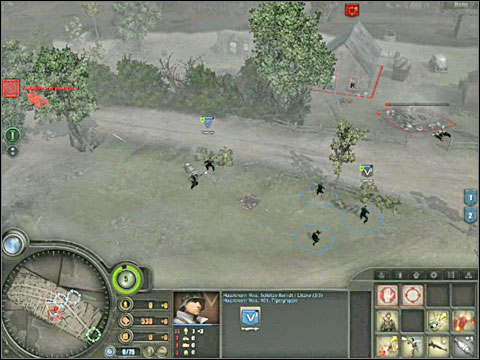 On the crossroad you will find the second anti-tank gun post, protected by a big group of British soldiers. The easiest way to get rid of them is to call an artillery strike once more and afterwards finish off the soldiers. Before you do that, your second team can take care of the mortar, which is located on the left, before the road and afterwards deal with the machinegun post on the crossroad, by throwing an explosive material from behind the hedge. The explosion will probably also destroy the hedge, so lead your men behind the nearby well. In the meantime, the second team can take care of the tank, patrolling the main road - shoot it with a panzerfaust, firstly placing your men behind a wrecked truck. Once the German artillery is done with the crossroad, go further to the west. 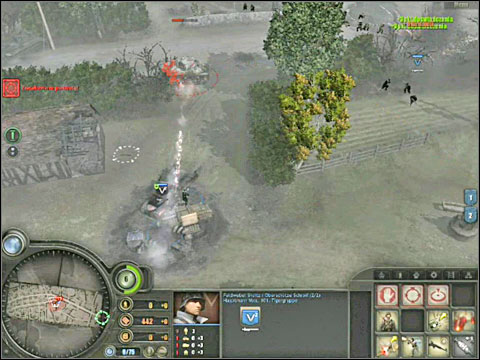 You will bump into some more enemy vehicle while crossing the road - a light tank and a jeep. Use the wrecks as cover. Use can use one of the teams to sneak up closer to the enemy and shoot a panzerfaust at the vehicles. Afterwards, run left. 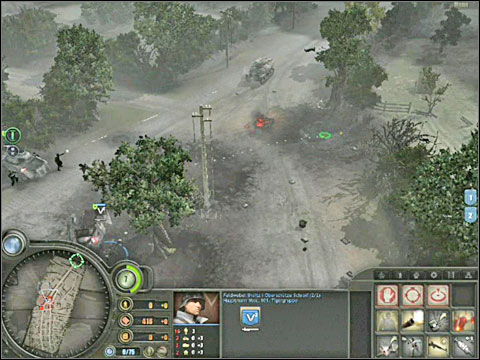