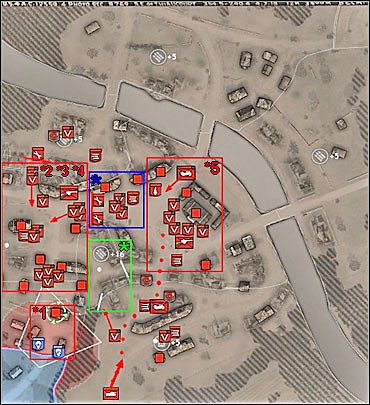 You've been ambushed when entering city of Carentan. Cafe Normandin is a building Germans are shooting at you from (they have MG-42). You should destroy this building [*1], this is your first of primary objectives. [1]

At the beginning of a mission you have two squads of soldiers. Leave one squad behind the wreck they're hiding, don't touch them. Select second squad of riflemen hiding behind the ruins, fire-up these soldiers and run to the right, take a route marked with green circles on picture [2]. Then toss a satchel charge into the Cafe Normandin. When building blows up collect light MG-42 with this squad and run to the wreck you see on the road next to Cafe. Move remaining two squads (after killing enemy in Cafe Normandin you will receive one more squad) to the low wall (upper left corner of picture [2]).

From there you'll see more enemies: some of them in a building opposite, rest - outside of it. It's best to shoot them all patiently, hiding with your people behind the wreck and low walls though you can blow up nearest building. [3] Afterwards move forward.

Jump with one squad of riflemen to the building occupied by Germans a moment ago, place rest of your soldiers behind the low wall to the right and another wreck in the middle. You can blow off (using explosives) Germans hiding in a building extremely to the right, fire-up your people before action. Krauts hiding opposite in two buildings and on the square between them again try to shoot patiently without destroying the houses. [4] When they're finished jump with two squads to the buildings, take a Panzerschreck lying under one of them. Leave the building occupied by the third squad and move your guys to the left, under the church you see in the distance (upper left corner of picture [4]).

Now you must clear church area [*2] - it's second of primary objectives. Your soldiers hiding in buildings should be relatively safe - they can painfully bite Germans around the church and concentrate enemy attention. Use this fact to collect a Panzerschreck with squad running to the church and throw a grenade into MG-42 position under the church, then a satchel charge into the shrine. Use nearest low wall as cover. When Jerry in church is finished quickly capture abandoned MG-42 and jump into the shrine. [5]

It's time to kill Germans occupying one more building, this time opposite the church, on the other side of the square. Open fire from MG-42 you have in church now, squad with light MG-42 occupying one of the buildings should fire too. Try to eliminate Krauts with rest of your soldiers (armed with Panzerschrecks), hide them behind the obstacles on the square. [6] At last you can try to get close with one of your squads and to throw a satchel charge into the building.

When Krauts are finished jump with squad armed with light MG-42 into that house, leave the church with your heavy MG-42 and open fire at enemy AT gun Pak 38 you'll see (top of picture [7]). You should have no problem to destroy it quickly with boys armed with Panzerschrecks (eventually by throwing grenades into it) but it's best to kill the crew only and to capture abandoned gun. Do the last thing with squad that captured heavy MG-42 under the church then roll AT gun under the shrine. [7]

When you've finished with enemy AT gun your next task will be to garrison the church [*3] (place heavy MG-42 back in the shrine) and to upgrade it to barracks [*4] by clicking on the building first and then on icon in the right corner of the screen. A moment later start producing in the church-barracks a sniper and a mortar section. Simultaneously quickly prepare yourself for enemy counterattack which will come from the north and east (several infantry squads): place your soldiers behind some low walls and obstacles around the church and on the square in front of it and order them to observe these two directions. Build with your people and as quick as a flash some additional sandbags eventually. Replenish their human losses at once. If you see some counterattacking Germans entering one of the buildings destroy it with AT gun you've captured. [8]

After repeling Krauts size the nearest munitions point [*] on east - it should be enough to capture it, you don't have to build an observation post on it because german mortar is shelling it with grenades and enemy sniper is shooting from the nearest building. You can collect a Panzerschreck lying in white circle near that point. Afterwards breach with your satchel charges two walls I've marked with white lines on my map that are blocking your way to the square in front of a town hall and to another munitions sector on the south. You can recruit one more HMG section and place it here to cover both passages you've done a moment ago in case of Germans trying to use them to get to your church. Quickly kill enemy sharpshooter hiding in a building. [9]

Jump into that building with your infantry, kill enemy soldiers staying around the heavy MG-42 on the south, destroy the motorcycle and toss a grenade into MG-42 position, then quickly hide in building again. [10] When you will have a possibility to use a satchel charge again go outside and throw explosives under the nearby building from where another sniper is shooting.

Run across the square to the other side, take positions in buildings and eliminate all the Krauts guarding southern munitions point: kill MG-42 and infantry on the street, finish second squad of Germans hiding in a building opposite. [11] Capture that point. Later you will have a possibility to move from there to the town hall but your main task here will be to prepare an ambush on enemy armoured car Sdkfz 234 which will be passing by soon.

In the meantime church-barracks should produced a sharpshooter and a mortar team. It's time to use this tandem. First test it in the action of seizing next munitions point situated on the north: camouflage your sniper, order him to fire only on your command (to avoid fighting with superior enemy) and take out with him german pioneers working near the barbed wires blocking your way to the north. Then use your mortar placed near the church to bombard munitions point area (there are some enemy soldiers) but first of all a building with german sniper in it. Be patient, your fire will last a little (poor accuracy). When enemy sharpshooter is dead you can get closer with one riflemen squad to blow up with satchel charge barbed wires and then jump into the building near the munitions point (don't capture it for the moment). [12]

Get closer with your sharpshooter also, hide him behind the sandbags under the building and take out MG-42 crew to the right of munitions point. Then you can leave the building with your soldiers, quickly collect abandoned MG-42 and bring it to the house. Rest of soldiers can now capture munitions point and build on it observation post. [13] Replenish the manpower of this squad near the church later.

Go back with your sharpshooter to the church, then move east by the road, to the town hall, uncovering enemy positions (in buildings too). Bombard these positions with your mortar grenades, use sniper only to kill these few enemies or these important (for example MG-42 sections). But be careful - enemy motorcycle is riding here from one of the bridges from time to time: have an eye to your sniper, withdraw him quickly when in danger. But try to kill enemy mortar crew you'll see on the square in front of a town hall or destroy it with your mortar. [14]

If your sniper is dead, recruit new one. Try to score 30 sniper kills to complete additional mission objective and you'll be awarded with Army Sharpshooter Badge for that. When you've killed most of Germans west of town hall with your tandem sniper-mortar time to organize general attack on the town hall. You have to secure that building [*4], it's last of primary objectives. Move with your main forces (produce some more infantry earlier if you think that's necessary) to the east, by the road: sniper as a leading person (he's uncovering next enemy positions), rifle squads armed with Panzerschrecks and light MG-42s following him, HMG and mortar teams on end. If you captured AT gun earlier you can also roll it towards the town hall. You don't have to assault the town hall, just hide behind the obstacles (wrecks, sandbags) on the square in front of it and admire the battle. Try to get your HMGs as close as possible because they have great firepower. Start shelling (using your mortar) the town hall and the square. Watch out for enemy motorcycles coming from the north, from one of bridges. [15]

Take out with sharpshooter enemy AT gun crew you'll see next to the monument and another MG-42 close to it. [16]

Finally you'll see a german armoured car Sdkfz 234 rolling in on the square. Before that the car will drive across the half of a city (I've marked its route with small red dots on my map), entering the map from the south. So you can ambush the car earlier, in southern munitions sector (as I mentioned). Destroy the car with: 1) Panzerschrecks, 2) satchel charges or 3) with your 50mm AT gun Pak38 (these two latest methods in front of a town hall rather). [17]

After this action Germans should break down and start running to the north, to the bridges. Watch the movie showing an angry American shooting at them and voila - end of mission. [18] To be continued...