Without special powers it is hard to finish soviets campaign. Spending points on powers, first try to unlock those marked on screen below. 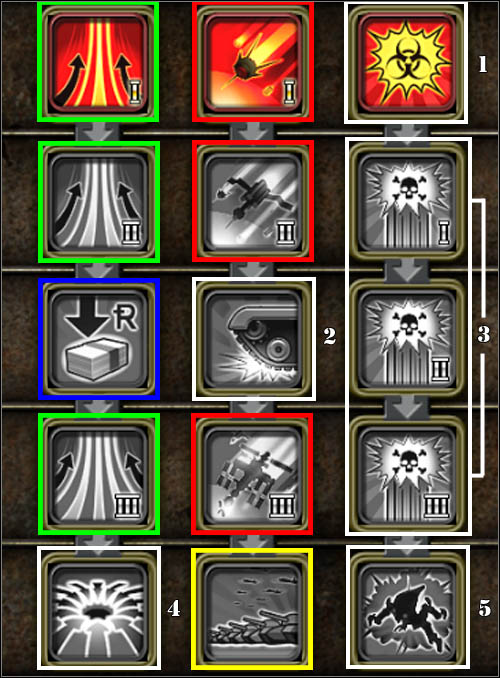 The most important powers

Magnetic Satellite - after you marked a place to use this power, a sucking radius of enemy vehicles, ships, planes and helicopters appears. It doesn't work on buildings and infantry. With each new level of sophistication suction time increase. Radius after locating on the board can move, taking units standing near or trying to escape from radius into space.

Orbital Drop - area attack, relies on drop of space satellites into selected place. Each next level of weapons increases its strike power. What's more, you can increase the number of objects falling to the ground by prior sucking enemy units into space (by Magnetic Satellite)!

Cash Bounty - thanks to this power you can ensure additional, albeit modest, the revenue to the treasury. After marking a several units or buildings enemy, you need to quickly destroy them, to get some money. Always select these objectives, that are able to destroy them for a while.

1. Toxic Corrosion - little useful power. With this power can obtain a unit in the tank with toxins. When the unit (car or boat) is moving, it leaves a poisonous substance, which is deadly for infantry, vehicles and boats. When a unit with tanks will be destroyed, toxins will spray within a radius of several meters from the place of explosion. Power extremely impractical.

2. Grinder Treads - Soviets land units can't be repaired, but it's possibility to help them in auto repair. If any large unit (such as Hammer tank or Apocalypse) will drive over another, the energy bar will be renewed. The most of the enemy units are eliminating by navy or air strike, so it's rare opportunity to run over an opponent.

3. Desolator Air strike - pretty good weapon, but - in contrast to Orbital Drop - works properly only against units, especially infantry. It consist on drop toxins in the selected area. The higher the level of this weapon, including a wider area and the chemicals can contaminate much longer on the map.

4. Magnetic Singularity - it is an area attack. After using it, all units located on your territory will begin to approach each other, getting into one mass. Power to apply only in conjunction with attacks from the air or discharge equipment from space. This requires exceptional strength of involvement in an attack: you must find the appropriate group of units, then use the power, and then start hitting. It's definitely easier to contaminate the area of chemicals, suck opponents into space or drop satellites.

5. Terror Drone Surprise - non practical power. It consists in the fact, that from time to time from a vehicle destroyed in fight, Terror Drone robots showing up. However, the best is to use the navy or air, power described here is losing on value. What's more, it is available only at the end of the game, and it requires a lot of points to unlock.