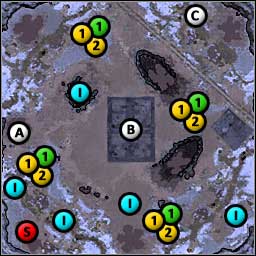 Kane wants you to awaken the Marked of Kane, his cybernetic army waiting in the Control Nodes. Taking over this strategically important buildings is your number one priority.

You'll start your mission in the south-western part of the map with a small base and a single Tiberium refinery at your disposal. GDI forces surprisingly won't disturb you as you're building your main base, so don't waste your resources on the turrets. The only real threat are the enemy patrols.

The blue Tiberium field will shrink almost instantly, so you'll have to look for another source of funds. Taking over the four spikes in the southern part of the map seems to be a good idea, but you'll have to set defenses around them, as GDI will try to reclaim them using engineers. Venoms seem to be an optimal solution to this problem, so send a few to each of the spikes. 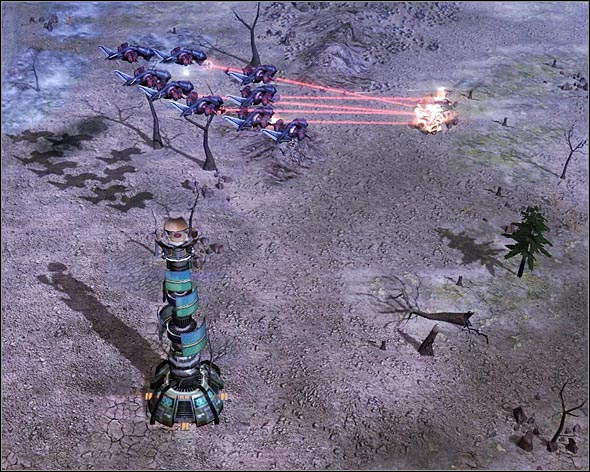 Protect the spikes from enemy engineers and patrols.

Once you take over the spikes you may construct and additional refinery near the field in the north-west (marked with A). If you decide to do it, prepare to defend your position, as this area is being patrolled by GDI tanks that will attack your structures on sight.

Once your financial position is secured consider your next actions. You main objective here are the control nodes, but before you embark on that task you might want to attack the GDI base in the center of the map (marked with B). Getting through its defenses may not be an easy task, but when you get rid of it the rest of the mission will be a piece of cake.

The GDI base's defenses are really impressive. Once you'll get through the numerous turrets (of all kinds) you'll have to face a large strike force accumulated inside. Air attack seems to be a very bad idea (unless you want to do it with about a hundred Venoms), as GDI has a lot of Pitbulls and Slingshots around.

Before you launch a frontal attack you'll need to get rid of enemy construction yard and crane. To do that you'll need to scout the enemy base with your Venoms (obviously losing them in the process) and once you know the locations of the buildings, nuke the spot with most power plants and then send about eight Vertigos at the construction yard.

Once the building becomes rubble reinforce your army by filling the losses and attack again, focusing on the crane. This way you'll rid the GDI off the chances to rebuild their lost buildings. 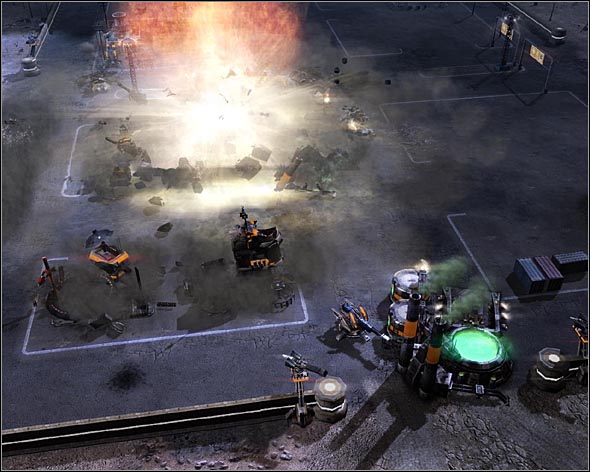 Before launching a full-scale assault nuke the GDI base.

Now focus on destroying GDI's key installations - the power plants, barracks and war factories. Without power the turrets will become useless and without the production structures the enemy will brake under your attacks. Ignore the structures such as tech lab or operation center as they don't have any value to the GDI right now.

With the main GDI base out of the way attack a small outpost in the north-eastern portion of the map (marked with C). Here lies the war factory that's the source of enemy patrols. By destroying these structures you'll deliver the final blow to the GDI.

After the destruction of GDI you may start capturing the control nodes. In order to do that you'll have to send a saboteur to each of the yellow marked buildings.

The awakening process takes three minutes thirty seconds. During that time the Nodes are vulnerable to enemy attacks but only if you haven't destroyed the GDI bases. Since you leveled them before the awakening this is going to be quite calm period.

In order to fulfill the bonus objective you'll have to keep nodes' health above 50% - if at least one of them gets below that value, the bonus is gone. 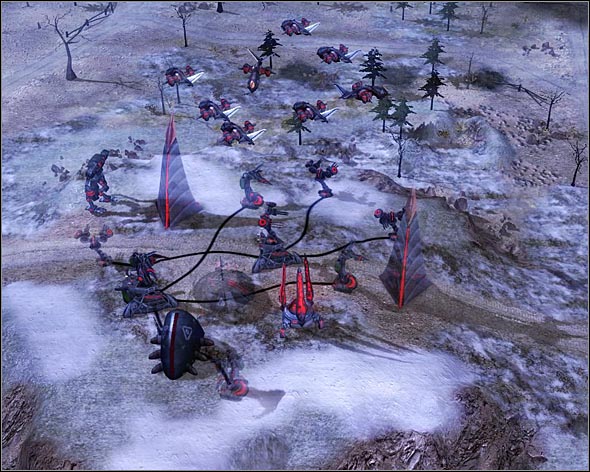 If you don't decide to take the GDI base down you'll need to ensure the proper security of the Nodes.

If you want this mission to be a bit more demanding don't attack the GDI bases and instead just go for the Nodes. After capturing all of them GDI will send everything it's got to destroy the Nodes so you might want to set up a perimeter of Obelisks of Light and shredder turrets around each of the buildings.