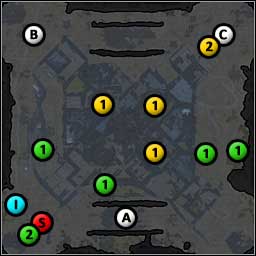 Time for the first meeting with Scrin. You'll start off with a small outpost and a few units to defend it. Quickly create a Hand of Nod and train a saboteur to capture the Tiberium spike to the west. Use your remaining funds to build some turrets - you'll need a full package of shredders, laser turrets and SAM turrets.

Once you'll secure the base create an Emissary and send it to the blue Tiberium field to the east (marked with A). After deploying there build a refinery and secure it with turrets. Extra income should improve your position, however pay close attention to your second base as Scrin may start sending their units their instead of your main base. 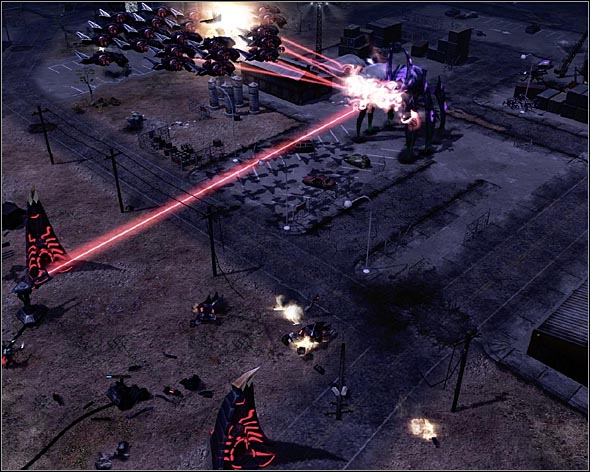 Let the Eradicator get into the range of your turrets before attacking it at full scale.

Construct a tech lab and develop new technologies. Scrin attacks will become stronger and stronger so reinforce your defenses with a few Obelisks of Light. You shouldn't save on your lasers - in few minutes Eradicator will appear, and all your spent money will pay you back.

Time for some offence. Your first target should be the cultists controlling some Brotherhood units. This task shouldn't be too hard, especially if you'll use your air units. Once you'll rescue the combatants pull them back and use them to boost your defenses.

Spend some resources on the construction of the Temple of Nod (nukes will come in handy in destroying enemy bases at points B and C) and devote the rest on developing your army. Once you're ready for battle, attack one of the Scrin construction yards.

The Scrin will send in their most powerful unit - the Eradicator. It's another heavy armored unit with gigantic firepower. Once it's on the battlefield it should become your top priority. You can attack when it's far from your base, but the most reasonable solution seems to be to engage it at full strength once it gets in the range of your turrets. 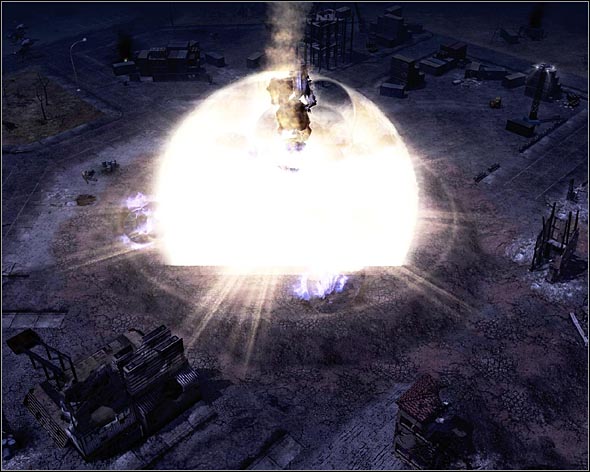 Nuke sent on one of the Scrin construction yards.

If you want to pass the second bonus objective, you'll need to crate the Redeemer, but you don't have to send it against the Eradicator - you just need to construct it before the mission is over.

At this point there should be only two Drone Platforms remaining. Destroy them and the mission is over.