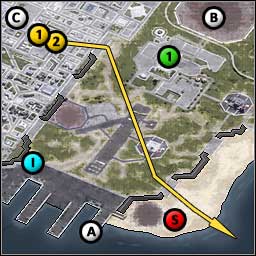 Kane wants to kidnap a GDI scientist, dr. Giraud who's doing research on Tiberium. The scientist hides in a well protected laboratory.

Again, your first few decisions will decide the outcome of the whole mission. GDI won't toy with you so expect them to send waves and waves of attacks. You'll have to get defensive in the first few minutes or you won't get the chance to get to the doctor.

You'll need to be very fast. Create an operations center, war factory and a Hand of Nod. Create a second harvester and a reckoner along with two saboteurs. Start building up your defenses starting with SAM towers. Flame tanks should be enough to stop the first few waves, but without support, they'll get destroyed by the pressing enemy. 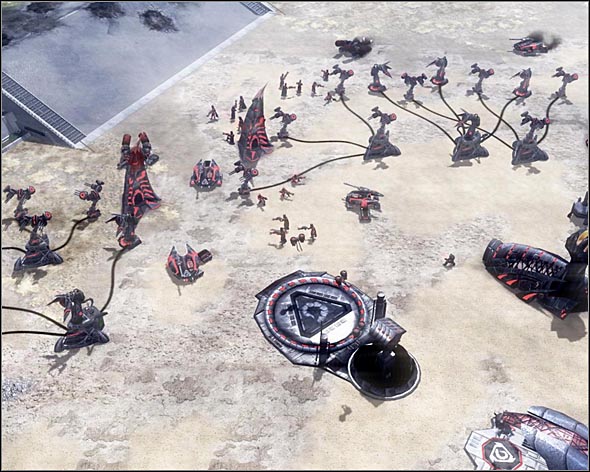 Defending your base is your first objective.

Get the saboteurs onto the reckoner end send them to the Tiberium spike, making a short stop in the port (marked with A) to pick up the crates. Take over the spike and one of the silos and send your reckoner back to the base. Now you'll need one saboteur and one infantry unit - get back to the spike and take over the second silo. Deploy the reckoner and use the infantry to defend this outpost against possible attacks.

During the capturing of the spike and silos you should continue building up your base. Build tech lab as soon as possible and create four Obelisks of Light which will become the backbone of your defenses. Add some shredders and upgrade them and your defenses should be impenetrable.

Once your position is secure you can start getting offensive. Your first target should be the military outpost defending the space port. Build an army consisting of Purifiers, Mantises, flame tanks and few artillery units. Flame tanks should defend your army from zone troopers who are the biggest threat to you.

Attack from the north-west slowly pushing forward. Destroy every enemy in sight and level the buildings with artillery. Soon, the construction yard and the unit production buildings should be down. Don't forget to take down enemy refineries.

Once the area around the Spaceport Control Center is clear. Create and Emissary and start building your second base here. Focus on the defenses (the enemy will switch to your new outpost) and the refinery. Your harvester will gather Tiberium from the field to the north (marked with B) which should greatly improve your war funds.

Repair the remaining units and add some new if you need. For the second assault your need mostly Purifiers and artillery - the more the merrier. After forming a strike force head westward, towards the city. Move carefully destroying every building on your way, as many of them may hide missile squads. Specters should be the best for that job, while Purifiers should stay back defending the artillery if necessary.

Clear the area around Giraud's lab and level the base to the north-west (marked with C). When there is no enemy in sight move your troops towards your main base. Near the airstrip there are a few remaining GDI buildings. 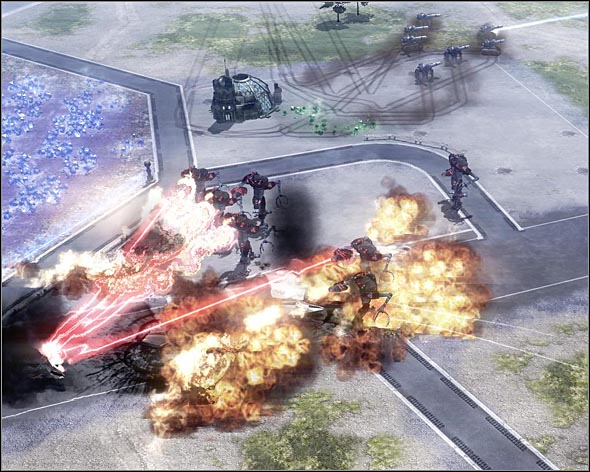 Destroy everything that gets in your way.

After the area is secure create some Mantises and a few new Purifiers. Send your army to the lab. Capture the building and wait for the situation to develop.

The Brotherhood will send in a transport vessel to get the scientist out of the area. The aircraft will move to the south-east (the exact route is marked on the map) and you should escort it. Move your troops towards the base eliminating every enemy that tries to take down the transport. Be wary for the Slingshots and pick them as your primary targets.

Once the aircraft gets to the ship the mission is complete.