Act 2 - All that Glitters 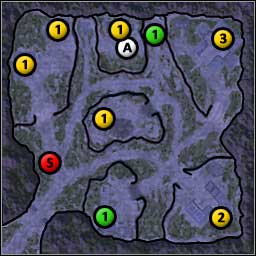 Extremely interesting mission, quite different from what you've seen until now. You'll gain control over two shadow teams that will have to place shadow beacons in front of enemy buildings so that the artillery can take them down. Both teams have stealth, however the mission is not as easy as it may seem. There are a lot of detector units in GDI bases and most of the turrets placed on this map also seem to possess that ability.

Get both teams airborne and send them to the power plant to the east paying attention to hammerhead patrols in the area. When you manage on the hilltop tag the first building.

Get through the bridge to the north killing the enemy troops in the area. Tag the next power plant and head westward trying to avoid enemy patrols (even if you kill them the enemy will get a new one in their place quite fast. Tag the last two buildings and wait for the situation to develop. 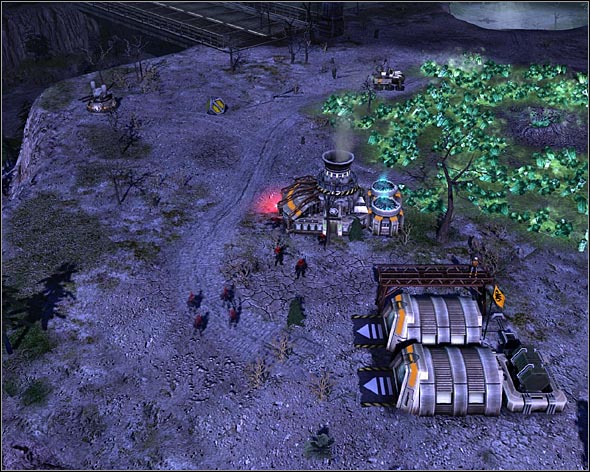 If you get airborne after placing the first tag, the turrets will notice you and bring you down.

The Brotherhood will destroy the power plants and send in reinforcements. Apart from stealth tanks you'll receive Specter artillery. Their cloak ability and huge firepower make them a very powerful base destroyers.

Pull your shadow teams back towards the second of the destroyed power plants (marked with A) and destroy the airstrip with explosives preventing the enemy from producing more air units which can prove to be crucial later in the mission.

The only bonus in this mission is about retrieving the gold bullion. The precious cargo lays around in both northern and eastern part of the map. You can gather them with shadow teems, but you'll have to get rid of Pitbull patrols in the south (preferably by covering some point on their patrol track with continuous artillery fire) - the bullion in the north isn't guarded at all.

Send your units towards the hill where the center is located, but don't get on top of it. Target the war factory with your artillery, wait for the hammerhead to appear over the building and give the fire order.

Use the forced attack (leftmost icon in the order bar) to destroy enemy Pitbull patrols. It shouldn't be much of a problem, as you'll have to attack some point of their patrol route. Once the vehicles turn into dust destroy the bunkers and bring down the hammerheads using stealth tanks. 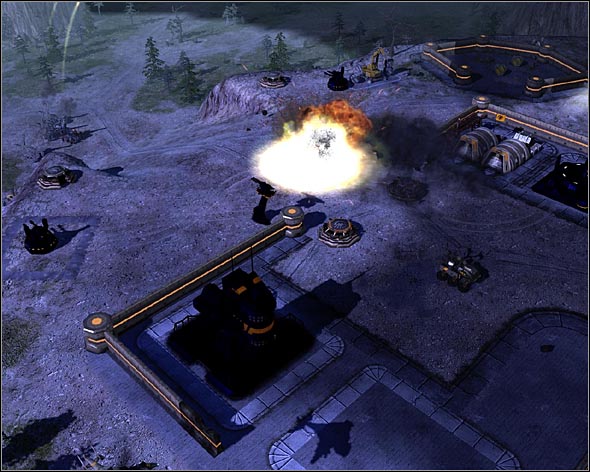 Watch the Pitbull movement path and attack them at some point of their route.

Get on the hilltop and destroy the remaining defenders and the barracks, then focus on the communications center. Near the crane you should find two crates that can repair your damaged units.

Move your units to the north towards the hill where your last target is situated. Destroy the bunkers with artillery fire and get to the top. Wait for the hammerheads to get on top of you and destroy them with stealth tanks.

Select the artillery and level the area around the treasury - don't be picky just take everything down. Once there's nothing around to disturb you, attack the treasury.