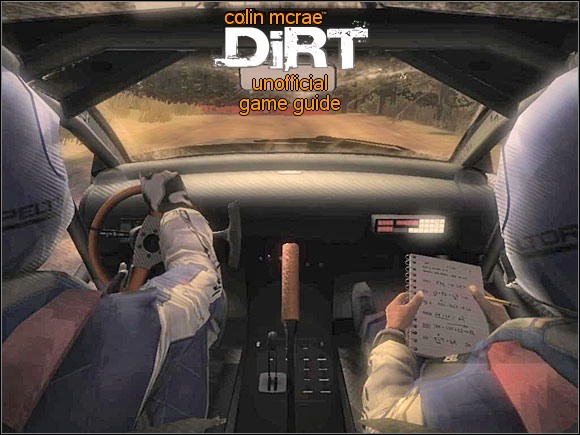 Co-pilot: - Ok, man, I'll read it to you once again, but this is the last time: "Far away behind the seven mountains lived..."

Welcome to the unofficial game guide to Colin McRae: DIRT. This game is a quite enjoyable rally racer that offers an arcade-realistic model of driving (with an emphasis put on the first element of this mix), tons of vehicles to uncover and lots of tracks to drive on. However, after several weeks of playing, sooner or later, you will probably start perceiving that DIRT has also some shortcomings. The greatest are: weak and schematic SI of your virtual opponents (contrarily to the declarations made by Codemasters) and the most important and disappointing - very poor and unfinished multiplayer (only two kinds of races, without a possibility to run against other living players on the same track). But let's leave it for now, it's time to tell you what you may find in my guide to this game.

For these of you who have problems with running the game smoothly (and DIRT likes to slack even on relatively strong machines) I would strongly recommend to read especially the first part of my "Hints" chapter: you'll find there some advices that may help to solve this potential problem.

Second chapter consists of a description of settings you can apply to your rally vehicle components and how these settings may affect your car behaviour on the road. I'm trying also to bring to light in this chapter two important notions (of over- and understeering), which may seem foggy/sound strangely to some of you.

Fourth part of this guide is about effects of damages and how they can result in rally car's performance.

In penultimate chapter you'll find a list of all rally vehicles you may purchase in DIRT. However, I'm not so proud of this whole chapter - unfortunately I didn't have as much time to work on it as I would have.

That's all for a start. Have a nice reading and I hope you'll find this guide useful.