Chronicles of Mystery: The Tree of Life Game Guide & Walkthrough by gamepressure.com

Chronicles of Mystery: The Tree of Life Game Guide & Walkthrough

Once you arrive, approach the bars blocking the way to the count's house (zoom). In order to raise it, you have to use the hands by the bells to set a code on the counter below. The count said to Sylvie on the phone that she knows his address, so you must search for the code like for the square, in the chronometer inscription: "Mary Celeste 1872". So pull the bell hands and set the code: 1-8-7-2. The mechanism budge but the gate won't open - something is obviously blocking it. Take a look at the edge of the wall at the very top of the chain - there's a stone which you have to remove with the paddle.

Once in the count's gardens, before going to the apse, take a look at the pool (zoom). Take the watering can and the green bowl. Take some water into the can from the pool.

Also take a look at the grass to the left from the pool (zoom). Take the gardening gloves lying by the tree stump. Afterwards head to the count (left).

After an interesting conversation about Briggs, Mary Celeste and the chronometer, Saint-Germain will order Sylvie to investigate a certain plank. Approach the table on the right (zoom) and investigate the remaining fragment of a ship. Use the spatula at the spot where the paint has cracked - you will unveil a part of the sign.

You need the right tools to continue, so search the shelf under the table. You the lye, polyvinyl acetate and a rice brush. First you must secure the unveiled part of the sign - take some polyvinyl acetate on the brush (inventory) and spread it on the plank. Now pour some lye into the bowl, combine the gloves with the rice brush - which means that Sylvie has protected her hands - and scrub the plank. Afterwards wash off the paint with the water from the can and unveil the sign with the spatula.

Report the count, this time the man insists that Sylvie becomes his private expert and find the chest for him. Eventually he'll ask her to solve floor relief problem - a part of it is missing. Check behind the net on the left ("under the window"; zoom). Take the stone tiles (the important one is the one above the three others).

Take a look at the relief (zoom), at its centre to be exact (another zoom). Put the missing tile in the hole (there are four of them and the matching one is mentioned above). Return to the previous zoom.

Your task is to arrange a certain pattern on the relief. Notice that the circles can be moved (by pulling them, not clicking) in pairs - the 1st (middle one) with the 3rd and the 2nd with the 4th. You move them by moving the pointer a bit and letting go off the button each time. Starting with the default relief, you have to move 3x middle, 1x 2nd and 4x 2nd or 4th, all of them counter clockwise (in the end, after moving one of the two circles, the count should make a comment). A correctly completed task (in each of the three stages) will be signalised by a mechanical rattle (don't mistake it with the sound of the circle moving). If you have already make changes to the circles and can't use the hints (and you haven't saved your game before starting the riddle), just move the circles in the order I gave you (1st, 2nd, 2nd or 4th) with small breaks between the moves. Below there is a properly arranged relief: 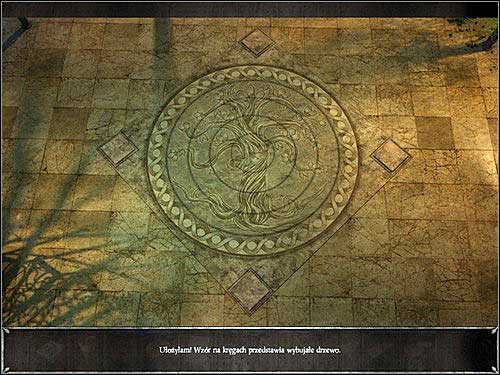 Notice that the four stone tiles situated around the circles. Investigate them (zoom), after removing each one of them you will find an urn with seeds but three of them are different than the one found before. The right seeds are in the urn under the upper tile. Take them and inform the count about the finding.

Chronicles of Mystery: The Tree of Life Game Guide & Walkthrough is also available in our Mobile App
FREE IOS APP