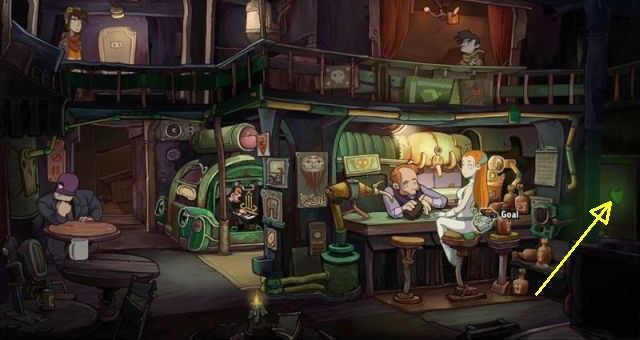 While inside the tavern, talk with Baby Goal (switch the memory card using the remote). There is no other way - you need to join the resistance. To learn more, talk to Garlef, who is sitting on the first floor of the tavern. You'll receive a key to the bathroom - use it. While leaving, Rufus will pick-up a shred of toilet paper. Make your way to the apothecary, who will tell you that you can get Cucumber of Revelation for a coupon. Give the blind pharmacist a piece of toilet paper, telling him that it's a coupon, and he will give you the aforementioned Cucumber. 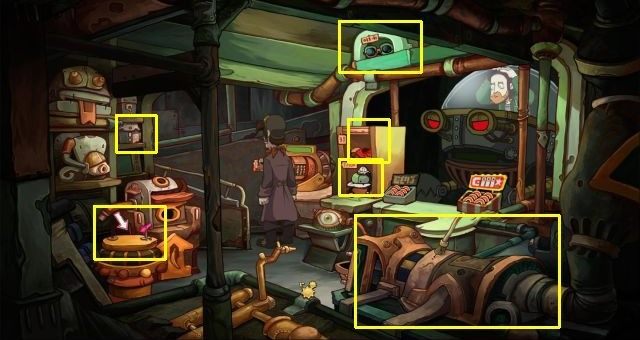 Travel to the gadget shope in the docks. Talk with the Buy-O-mat, and take a look around the shop. You need to get the Indestructible Sunglasses of Eternal Darkness located on the top shelf. To reach them, pick-up the Anti-gravity socks. Take the glasses and pick up the juicer hat which has to be used on Cucumber of Revelation. Follow the cucumber's suggestion and damage the glasses by throwing them into the shredder in the right corner of the shop. Rufus will file a complaint with the robot, who will wear the glasses. Use the opportunity to steal Golden Dragon of Invisibility and click on it in your inventory using the right mouse button. Take the damaged glasses and click on the seventh puzzle fragment (shelf on your left, above the banana straightener). Finally, leave the shop. 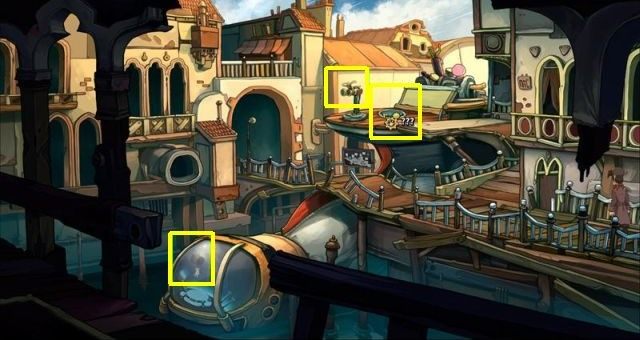 Travel to the tavern and talk with Garlef about rock-paper-scissors tournament. Descend to the bottom floor and talk with Nod, a member of Unorganized Crime. Go to Little Venice and take a look at the Tournament Hand seen in the submarine window. Click on the periscope and the hatch nearby. There is no chance of you entering the submarine - you need to beat the periscope. As a result, enter the inventory to connect the lens with the left side of the glasses, then connect the left side with the right side and put the glasses onto the periscope. You can now enter the submarine - use the hatch. 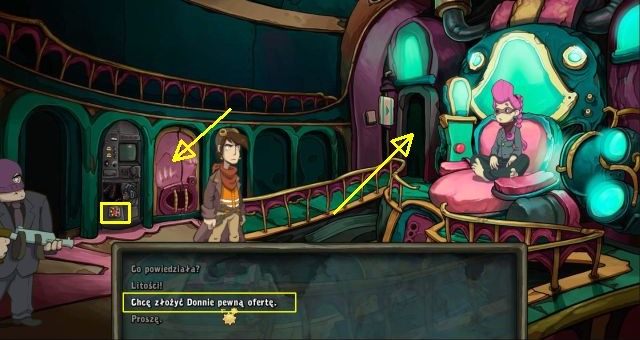 Click on the door to the radio room. Rufus will receive a message from Cleatus and slides will be added to his inventory. Press the button below the radio station - you'll unlock the door to a room with Kitty. Choose the razorfish from your inventory (taken from the tavern - visit the Air Platypus section to learn more) and click on the animal. Shaving the animal won't go well with Donna - the boss. Suggest that you have an offer, then back down ("Forget it") and agree to be fed to sharks ("Go ahead"). Rufus' courage will make an impression on Donna, who will agree to him joining the Unorganized Crime. Get through the bridge and take the Tournament Hand. If you failed your first attempt, return to Donna and try again. This part of the game is treated as a minigame, so you can skip it by pressing the cross in the upper right corner of the screen (the cross appears after the first attempt) 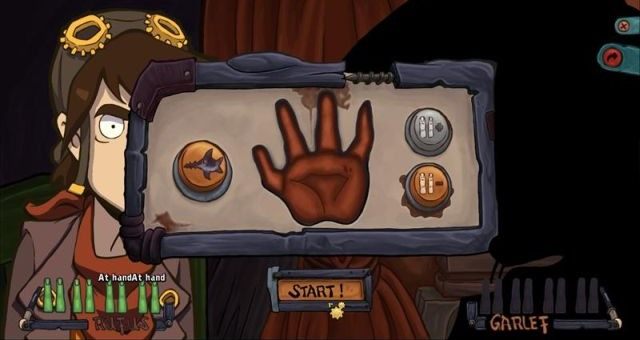 Final move: paper, which is an open palm with all fingers retracted.

Return to the tavern and ask Garlef about a rock-paper-scissors battle. A minigame window will appear. The rules are as follows: rock (closed hand) defeats scissors, scissors (two fingers) defeat paper, paper (open palm, all fingers) defeats rock. The only difference lies in the fact that you use special artificial hands and each defeat cost you two fingers that are given to your opponent. Garlef admits himself that his favorite move is the scissors, so it would be best to show rock, but you would need to use the button that removes fingers, which is out of order. Unexpectedly, winning is simple: first you need to lose to lose all fingers, either by pressing the razorfish button (which is automatically treated as cheating) or by throwing paper so that Garlef, who is throwing scissors all the time, could defeat you. Once you lose all your fingers, use the rock for as long as is needed for the enemy to lose all his fingers. Then, Garlef will show rock, so you need to show paper.