Difficulty levels change the enemy soldiers' abilities and the number of Juggernauts.

You will have to deal with a new enemy - the Juggernaut. It's an armoured soldier equipped with a heavy machine gun that doesn't stop no matter what and runs in your direction. Use a rocket launcher or one of the sniper rifles to get rid of him. If he gets too close to you, you're in some big trouble - use a flash grenade or shoot him with the sniper rifle so that he stops shooting at you and quickly head to a safer place. The first Juggernaut will appear tight in front of you at the very beginning of the mission. More of them will keep appearing at random places - you can even get attacked from behind.

Your task is to gather the Intel (in the middle of the map) and then get to the evacuation point.

On Veteran there are more Juggernauts. Additionally they don't stop shooting at you no matter what. As for the normal soldiers - they aim better here and can be quite troublesome at bigger distances.

After the mission begins, your priority is the Juggernaut in front of you - on the right or left side. Be sure to have a sniper rifle equipped. A couple shoots should be enough to kill him. Take any weapon with a sight that will let you fight on a small and bigger distance. What's important - staying in one place for too long isn't a good idea. Keep moving all the time and kill only those enemies who are a direct threat to you. Keep to the right side all the time and no matter what, don't move long the centre of the map.

Once you get to an open space, firstly shoot everyone you have in sight and then quickly run to the other side. Head to the laptop, from which you will collect the required materials. It will take a while so make sure that all the enemies around are eliminated.

Go to the destroyed plane, from which you can eliminate all the enemies in the valley. However remember that you can get attacked from behind by a Juggernaut! After going down, keep an eye for a Juggernaut on the opposite side, on a hill. Slowly move forward. Once you're around the middle on the valley, another wave of soldiers will appear. Get rid of them and go up the hill. 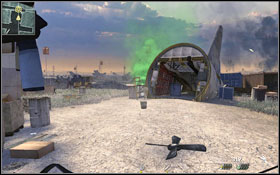 No matter what, don't go through the middle - keep to one side, behind the covers. Once you're close to the evacuation point, forget shooting - run to the designed spot.