You can only play this mission in co-op with another player!

One of the players is onboard the AC-130 and is provides support to the one on the ground. Good cooperation is required.

While playing this mission on the ground, you can pretty much depend only on the second player, who will clear the path for you in nearly 100%. Naturally you will have to eliminate a couple of enemies, however you'll just need to keep running for the most part.

By pressing [4] you can use the laser sight #1, thanks to which you can mark targets for your friend in the plane. Additionally you can use night vision to see the enemy units better. Move forward, turn left after crossing the bridge and head to the barn #2. Kill every enemy that your friend didn't manage to.

After going out of the barn turn right and quickly run through the field #1 to the next house, into which you will get through the basement #2. You have to have faith in your friend above, who has to protect you (enemy units will appear behind you).

Clear the house of the remaining soldiers. Try going from one house to another, as there are enemies everywhere. Another safe spot is the greenhouse #1, where you can wait for your friend to clear the area. It's not far to the destination point from there. Go to the next barn #2.

Player onboard the AC-130

This player has definitely a lot more responsibility. If you don't provide your friend with enough air support, he'll probably die because of too many enemies around. You have three different weapons at your disposal:

25mm - useful when dealing with single enemies - I wouldn't recommend using it at all;

40mm - a good and quite fast weapon, it allows you to shoot near your partner. Great against enemy helicopters, it eliminates multiple enemies at once;

105mm - causes a very big explosion and takes a long time to reload. Great for a big concentration of enemies far away from the other player. 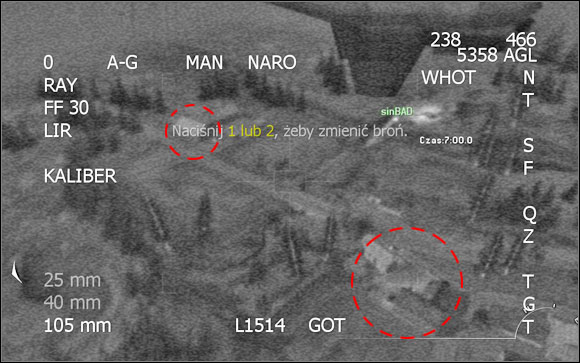 Shoot the hoses before the other player enters them. Choppers are an important target, they appear several times during the mission and enemy soldiers lower themselves from them. Use the medium calibre gun for most of the time, changing to the biggest one sometimes (to eliminate a big group of soldiers or to have a wider view). Keep an eye on the road - a couple of vehicles with enemy soldiers will show up. The important targets are: a couple of buildings by the field (another goal of the other player, after crossing the bridge), the fields (choppers will appear above it and the second player will be attacked from behind). Once the second player gets to the basement and will be inside the hose, quickly clear the area in front of him. Enemy units in the back won't matter anymore.