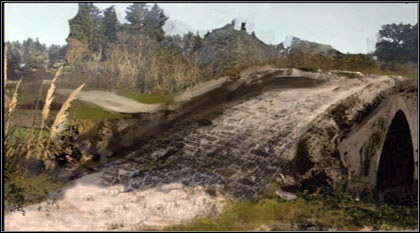 Run to the tree trunk (#1) and using a sniper rifle eliminate the opponents on the hill side on the left. Then follow the path and go up until you reach the ruins of some building (#2). Use them as a cover and clear the way.

Go round the ruins and following the indications on the compass, hide behind the tractor. Eliminate the Germans inside the wood storehouse and get through it.

There's a building occupied by enemies in front of you (#1). Your task is to capture it. Run the path leading to it. First eliminate the enemies standing in the windows and go right round the house. Near the wooden box (#2) you will find a little group of enemies. They will be engaged in combat. It is a perfect opportunity to kill them.

Now go inside (#1) and shoot the enemies found there. Go out and follow your comrades (#2).

Your task is to blow three anti-aircraft posts. All of them are situated in the connected trenches (#1). Once you'll jump inside, the situation will become very hot. Use smoke grenades, find a good spot behind one of box pile (#2) and shoot from there.

Once you'll reach the first post (#1), don't start with putting the explosion package. Instead, first clear the passage leading further. Then come back to the gun and put the package. Run through the passage you cleared a moment ago. Repeat the same sequence with the next gun. As for the third one, after putting the blowing package, go back the same way you came, because there will be no further way.

After the explosion, you will be able to move on. Leave the path quickly (#1) and go near the enemy posts from the left side. You can hide in the smoke, to be safe. Kill the soldiers operating the mortar and take control over it. You need to destroy three trucks seen afar. If an enemy approaches you while doing it, return to the regular mode, kill him, and go back to the mortar.

Soon you will find yourself on a military parking space. There will be a lot of things to hide behind there (cars, boxes). Use them to take cover and eliminate the soldiers nearby. You can even shoot while lying beneath some cars (#2).

And now the last part of this mission. Follow the path (#1) and reach near the building full of enemies. Of course, you need to kill them all. Don't run to the court immediately. Taking cover behind the fence (#2) and staying in the distance, eliminate the soldiers standing by the house.

Now run to the left wall of the building (#1). Broke the window and throw a grenade inside - regular, smoke or better both of them. Now you can go in and kill the survivors. Then go back the house, eliminate the rest of the Germans (#2) and join your squad.

This site is not associated with and/or endorsed by the Activision or Treyarch. All logos and images are copyrighted by their respective owners.