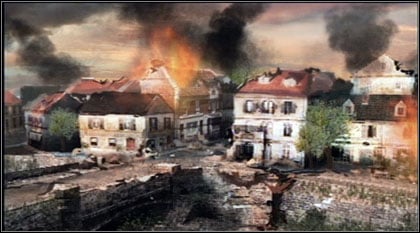 This mission starts near the castle occupied by Germans. Before you go there, take care of enemies waiting around the place. Head to the east and go through the house (#1). There's another building behind it. This one is guarded much better (#2). Hide behind the fence and kill the enemies. Watch out for the grenades. There's no need to run when one will land near you. You could get hit. Better throw it away quickly. When the entrance to the building will be open, go inside and clear both floors. Then return to the west.

First eliminate the opponents in the building situated on the south (#1). Then you can attack the castle (#2). Kill enemies guarding at the entrance (the ones on the right first). Hide behind barricades and shoot the rest of Germans.

In the main room hide behind the wagon (#1) and shoot from there until you clear the way. You can also throw a couple of grenades. Soon you'll reach a court with a statue in the center of it, but there's no time for admiring the art.

Don't even think about frontal attack. Let your comrades take up the enemies, go in the arcades and shoot them from the side (#1). Then get to the basement (#2). Inside you'll find few opponents. Eliminate them while hiding behind the barrels.

Soon you'll reach an open area with some walls on it (#1). There's a lot of opponents here so don't get uncover. Look around and you'll see a passage on the left (#2). Use it and staying near the brushes walk round shooting enemies. Kill them. You can always take cover behind one of the walls.

Now you need to get across the river. You'll find a boat in the dock, but it is guarded well. Throw a smoke grenade and get to the building ashore (#1). Kill all the Germans along the way and head to the foot-bridge. You can take cover behind a wall nearby. Soon you'll reach the boat (#2). Get in it.

After everyone will take its place (#1), you'll need to oar quickly to get across the river. Soon before reaching the land, you'll receive another task. You need to kill the enemies (#2). After doing it, you can disembark.

Now you have a little problem. You won't get through without eliminating two machine guns posts in vicinal buildings. First head to the lower one in the middle (#1). Throwing a smoke grenade will help you get inside safely. It will be hot there, so be careful. After killing the opponents upstairs, get higher and eliminate soldiers at the post (#2).

Go downstairs. The door which was closed before should now be opened (#1). This is the passage to the vicinal building. Throw a grenade first. Then, using the walls as a cover, kill the enemies inside. After clearing the ground floor, go upstairs. Soon another gun will be yours (#2).

Meet up with the rest of the squad. Wait until your comrades move the locker and open the door (#1). Now you need to get across the street to the opposite house (#2). Try to clear the terrain first and go inside. There kill all the opponents.

Leave the building using the back door. Go downstairs (#1) and get to the court. Your task now is to eliminate the anti-aircraft post. To reach it safely, you need to find a safer way. Run across the street and walk inside the house (#2). Eliminate the Germans hiding inside. Get to the other building through the hole in the wall. There's a lot of enemies to kill there too.

Wait until the situation calms down. You can shoot the enemies using a hole in the wall or leave the building and hide behind the car wreck standing nearby. Follow the indications on the compass and you will reach the anti-aircraft posts soon (#2). Kill the soldiers guarding them and move on.

Then a tank will arrive (#1). Go after it. Soon the enemies will appear. Most of them will hide behind the sandbags on the left. Throw a grenade toward them. Now head to the way the tank did. You will see the stairs on the right (#2). Go up and clear the building. Come back the same way you came.

Cover up for Huxley and wait until the tank will be destroyed (#1). The terrain is full of covers so you should kill all the opponents without a problem. Go after your comrades and you will reach another building (#2). Go inside.

Kill all the enemy soldiers inside the building. First on the ground floor, then on the second one. After you clear it, go to the balcony (#1), turn back and join the rest of the squad. Now it's time for the last part of the mission. Go to the river shore, eliminate opponents and walk below the bridge (#2).

Over the bridge go upstairs (#1). There's a lot of Germans but the terrain is good. You will find many places to hide. It's also good to take advantage of red barrels standing there. You can shoot them in the right moment and kill few opponents right away. You can also use some regular or smoke grenades. In the end, you'll reach the MG42 gun. Take it and shoot the running up enemies. You completed the fourth chapter. Unfortunately, not without loosing any of your comrades.

This site is not associated with and/or endorsed by the Activision or Treyarch. All logos and images are copyrighted by their respective owners.