Call of Duty Warzone can overwhelm you with the map size, type and number of weapons, as well as many mechanics that are typical for the Battle Royale mode. In this chapter, you will find a set of general tips and advice that may help you win many battles in Warzone. The advice is especially directed to new players who are just beginning their adventure with Battle Royale games.

Call of Duty Warzone focuses on team play so you have to remember that you are a part of 3-person team on the battlefield. Remember that there are 150 players playing on one map at the same time so you can be attacked from virtually any position. Don't attack enemy position as a single soldier cause this can only result in a weakening of your own team and a reduced chance of winning.

Use the ping system (marking) 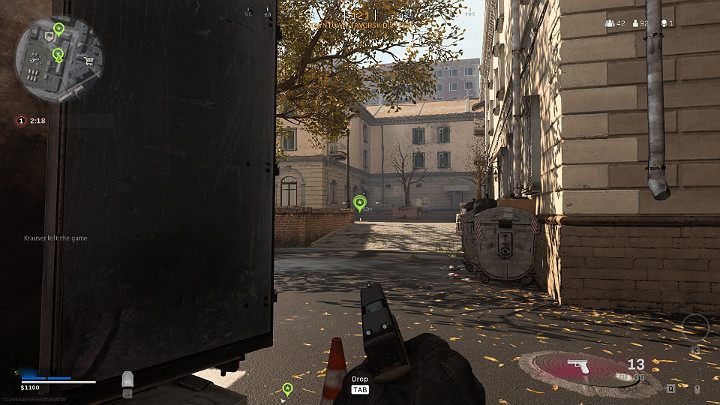 Have you spotted an enemy or defeated one of your opponents that dropped valuable items which might be useful to another team member? Or have you found additional armor plates that you don't need? This is a great time to use the ping system to let the team know what you found and where to look for it. Pinging communication makes it easier for players to communicate without using voice chat.

In every team game, proper communication is the key to success. If you have the opportunity, use voice chat to better cooperate with the rest of the team. Sometimes the gameplay in CoD Warzone is so dynamic that you can't warn other team members otherwise than by using a quick voice command.

Stay close to the team

Remember, Call of Duty Warzone is a team game. Try not to stay away from the rest of the team, so that you can help them quickly in case of danger, as well as count on their help. Attacking the same target with 1 - 2 people is an extremely effective way to methodically eliminate the entire enemy team.

Before anyone is eliminated in Call of Duty Warzone, they first get the knocked down status. It gives you tens of seconds to react and try to bring your companion back to combat capability. This process is dangerous and lengthy, so before you start treating your teammate, think whether you may lose your own life. If your opponent is lurking somewhere near you, he or she is just waiting for you to start healing the wounded companion. The enemy wants to attack you at a moment of total helplessness. At this point, first try to eliminate the threat and then take care of the injured teammate. It is worth noting here that after lifting an ally, he returns to the game with full health.

Unlike other Battle Royale games, Call of Duty Warzone allows players to resurrect dead allies. To do this and redeploy a fallen ally, you must pay the appropriate fee - $4,500 in the in-game store. An ally returning to the game will still be an easy target to eliminate because he starts playing only with a handgun. 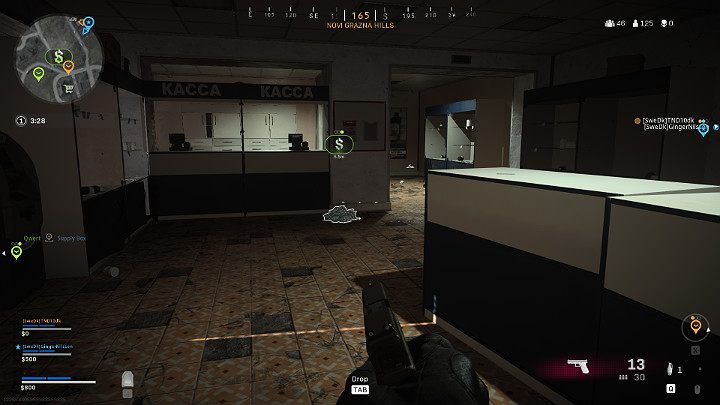 Fast and effective map exploration is an extremely important skill in any Battle Royale game. It's no different with Call of Duty Warzone! The map available in Warzone is gigantic in size and the objects are placed on it in a completely random way. There are a few important things to remember when you search the area, explore buildings and chase an escaping enemy.

Check the map and get to know it well

So far, there is only one map available in Call of Duty Warzone. Good knowledge of the terrain and layout of buildings, as well as popular landing sites will make you move around almost intuitively. Smooth movement in the maze of obstacles and buildings will give you a huge advantage over your opponent and allow you to fire your weapons from a variety of angles. Diversified terrain, residential buildings, broken vehicles, piles of rubbish - all this you can use for your own benefit! 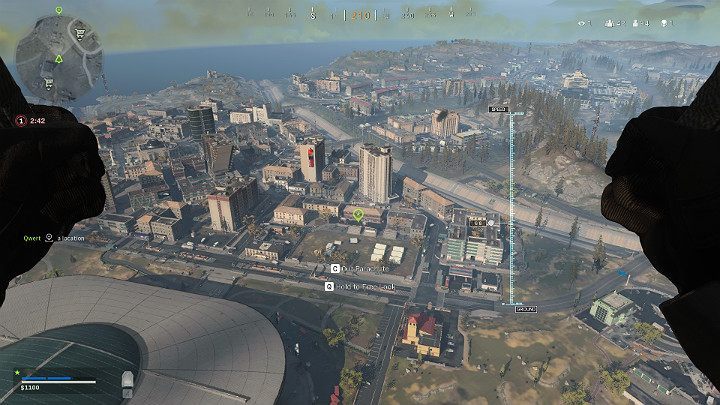 In Call of Duty Warzone landing is a much difficult stage than in other Battle Royale games. The player jumps out of the plane and then has to operate the parachute properly to reach the marked target. Falling down vertically and opening the parachute at the last minute is quite easy, but getting to the further marked destination is, unfortunately, much more difficult. While gliding to the rest of the map, you must repeatedly fold and open your parachute. Remember that you play as a team, so you should take the landing direction together and mark it on the map beforehand. You don't have to be afraid that someone will see your designation because it is visible only to team members.

Vehicles in Call of Duty Warzone

Call of Duty Warzone offers players the opportunity to use several types of vehicles. Due to the size of the map, driving a vehicle will allow you to quickly travel to safe places, for example to avoid lethal gas. 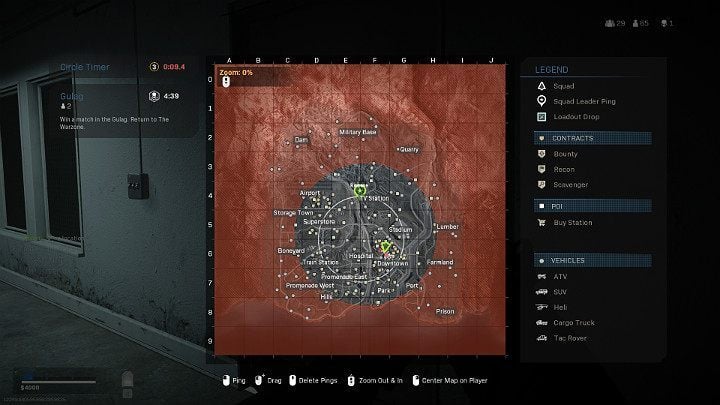 The map in Call of Duty Warzone was surrounded by a special circle. This zone, as you probably now, will start to tighten up. Each player outside the safe area will receive a certain amount of continuous gas damage. It is worth noting here that by staying in the hazardous gas area you will very quickly lose all your health.

Remember that if you fall from a great height, you can receive a significant amount of damage and even lose a life. During map exploration, don't jump from the roofs of buildings while chasing the enemy, because you may become an easy target to eliminate if the enemy only has to finish you off.

Listen to the environment

In Call of Duty Warzone all sounds (steps, gunshots, door opening) are very well heard, even when you are locked in a building and someone is running outside. That is why it is so important to listen to your surroundings and learn to recognize individual sounds.

You can read a lot of useful information from the mini-map. It shows you all places where you can do shopping, the position of your allies, as well as places where you can get a contract. Moreover, every shot of an opponent reveals his position on the mini map and is marked with a red dot. This will allow you to know the position of the enemy and allow you to organize an effective attack. 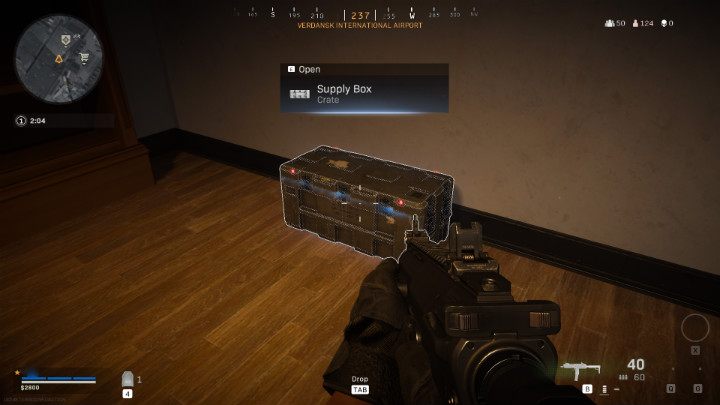 In Call of Duty Warzone, you start every game with just a single handgun. Without additional, more powerful weapons, armor, or additional items (grenades, mines), you are a much easier target to eliminate. To survive, you need the right weapons! So what to pay special attention to when collecting weapons and where to look for useful items?

If you've played other Battle Royale games, then you've certainly searched for special weapon add-ons, such as rifle butts (that improve weapon's stability while firing) or high-quality aiming scopes. In Call of Duty Warzone you cannot collect additional modifications to your weapons. By picking up the appropriate weapon you can get specific modifications, depending on the level of the item. 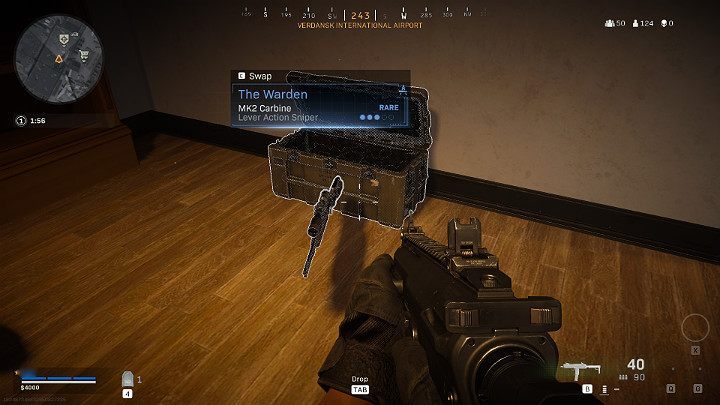 Items in Call of Duty Warzone were divided into levels. The items of the worst quality will have level 1 and the best quality level 5. The colors of the items reflect their quality and rarity: from white (regular), green (slightly better) to blue (rare), violet (epic) to orange (legendary).

Where I can find the best items in Call of Duty Warzone?

The map available in Call of Duty Warzone is huge. So, how do I know where to land in order to get the best items? Look for the best items in military facilities (such as Arklov Peak Military Base), prisons (Zordaya Prison Complex) or airports (Verdansk International Airport). Another place where you can find the best weapons are supply drop sites. Supply drops in CoD Warzone land in random places on the map so there may be lots of interested players - be careful.

The amount of space for weapons and armor in CoD Warzone is limited, so try to choose and take your favorite weapons. For example, you can opt for one quick fire rate weapon and one for close combat or a sniper rifle. In addition, you can carry 5 additional armor plates.

What I shouldn't do in Call of Duty Warzone?

This section contains some tips on what you should NOT do in Call of Duty Warzone. Following these rules can contribute to the survival on the battlefield and victory of the entire team.

Don't run in the open field

Running on open ground, such as roads or meadows, you become a very easy target to eliminate. When you move from point to point, always try to find some cover - it can be a immobilized car or even a garbage container that you can hide behind.

Don't expose yourself to enemy attacks

Once you've eliminated your opponent, he'll drop his weapon. Think about whether it's worth taking the risk and exposing yourself to an attack while collecting his loot. Remember that Call of Duty Warzone is a team game so there are certainly teammates of the fallen player lurking nearby who will try to take over his equipment.

Do not leave the area outside the circle zone

The tightening circle not only makes gameplay more difficult and forces players to move with the combat to a specific location, but can also lead to imminent death of your hero. Try not to stay out of the safe zone and plan your actions so that you don't get left behind.

Don't shoot until you aim

By shooting blindly, you will alert your opponent that you are nearby. Not only by firing a shot, but you will also appear on the mini map. When you see the target, remember to precisely aim and only then fire your weapon.

Don't forget to reload your weapons

Always try to keep as many bullets as possible in the weapon's magazine. Reloading or changing weapons during combat will take up a few seconds - you may lose some health. In the worst scenario, you will die.

Do not use sniper rifles in close combat

Sniper rifle is a perfect weapon for long-distance outdoor combat. However, when it comes to close combat it is definitely better to use a rifle, shotgun or ordinary pistol.