While playing multiplayer you will have an opportunity to try out five different game modes. Each of them is characterized by different rules. The following page of our guide to Call of Duty: Mobile provides an overview of each multiplayer mode. 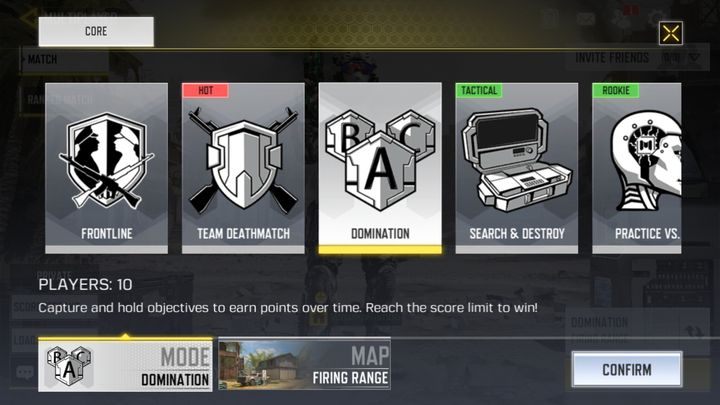 This is the most standard gameplay mode. Both teams compete in achieving the highest number of kills. A team that manages to get a certain number of frags will win the match. Players are respawned to the battlefield after each death.

Team Deathmatch is a mode similar to Frontline. A certain number of points are awarded for each kill. The team which as first achieves the required kill score is the winner.

In Domination mode, three points have been placed on the map. The task of the team is to score a certain number of points. Their quantity is awarded on the basis of number of acquired zones. The whole competition is divided into two stages.

Search & Destroy mode is based on planting bombs. One team is in possession of an explosive charge, which must be placed at one of the points protected by enemy. Victory depends on whether the bomb has been detonated or not. Due to the fact that death in a given round is permanent, one team can eliminate all members of the opposite faction to win the match.

Practice vs. AI is a variant of the game, which is a form of training. Here you can fight against characters driven by artificial intelligence.