On this page of the guide to Call of Duty Cold War you will find information about weapons and skills in the Zombies mode. This chapter describes all possible upgrades.

Before starting a match in the Zombies mode you can upgrade your weapons and skills. Pretty much all improvements require you to reach the right level, and in most cases - they also require Aetherium Crystals.

From the menu, you can choose upgrades to the weapons you use most often. To unlock them, you will not only need to be on the right level (you'll need to play several matches first) but also you will have to have crystals. First, upgrade the weapons you like best.

Every upgrade requires the right level and crystals.

Below, you will find all the weapon upgrades with a description and their cost:

Choose the upgrades based on your playing style. If you are a beginner, you might want to be interested in shotgun upgrades for starters - they require a low level and are quite strong against zombies.

Field upgrades are skills you can use during a match in the Zombies mode. There are 5 of them and each has different effects and upgrades. At the beginning, you will only have access to Frost Blast - the more experience you gain in matches, the better field upgrades you unlock.

Perks - passive skills which you can acquire on the Zombies mode maps. Special machines, dedicated specifically for that purpose, are scattered around the map. Most importantly, you can have all 6 perks at once. Below, you will find a list of all perks along with their available upgrades.

Juggernog will passively increase your health.

Ammo mods - change the behavior of your bullets, can cause different effects. You can upgrade them in the menu, and acquire them on the map only after you assemble the Pack-a-Punch Machine

For more information about the Pack-a-Punch Machine, see the Achievements section.

Of the entire set, the most useful are Dead Wire and Brain Rot.

In the game you a number of weapons at your disposal, but also quite a few weapon upgrades You can unlock 25 weapons by gaining experience in zombie matches. Each weapon can be modified visually, for example through the use of camouflage, as well as by attaching various parts, for example scopes, clips, etc.

The game offers quite a lot of freedom in terms of weapon upgrades.

Weapon parts change its parameters, as shown in the picture below. When you customize a gun, you can change the optics, barrel outlet, the barrel itself, body, clip, handle, rifle stock. Choose the upgrades to suit your play style. While optics are not so crucial, the clip is the most important. 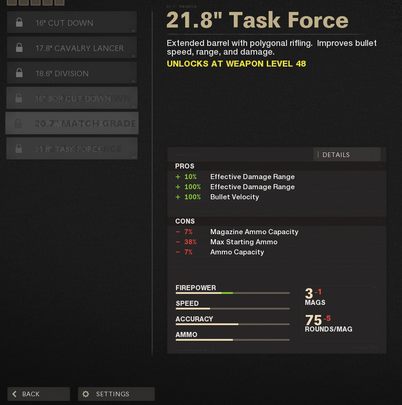