The achievement consists in closing the rift on the Die Maschine map. It might prove difficult to unlock this achievement due to the fact that you will need a variety of weapons that you can't just buy. This challenge is best done with other players. Below you will find a list of steps needed to complete this challenge.

To get this weapon, you will first need the weapon you receive after unlocking Carpe D. I. E. M. In the starting point area, enter the building and go to the very top of it. On the roof, you will notice that there's a window through which zombies get inside, but you can't get close to it - then you will notice a small canister(see photo below, marked yellow). Suck it up with a shot (if you can't pull it, waste some ammo). 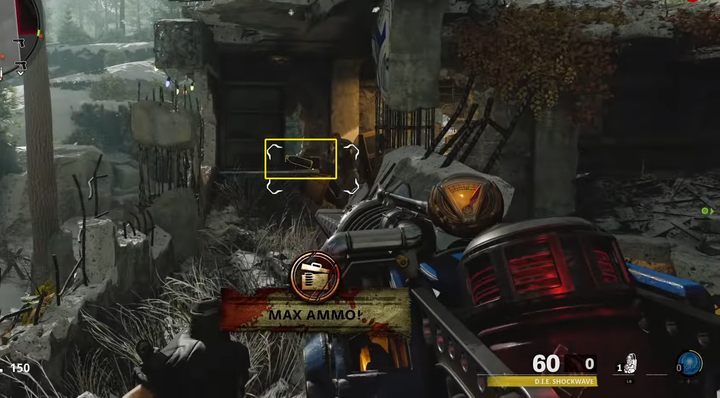 This is where you will find the canister, which you will have to fill up.

Then go to the underground facility, go to the lab, go through the hole under a bomb hanging on chains. There you will find equipment needed to refill the canister (photo below). 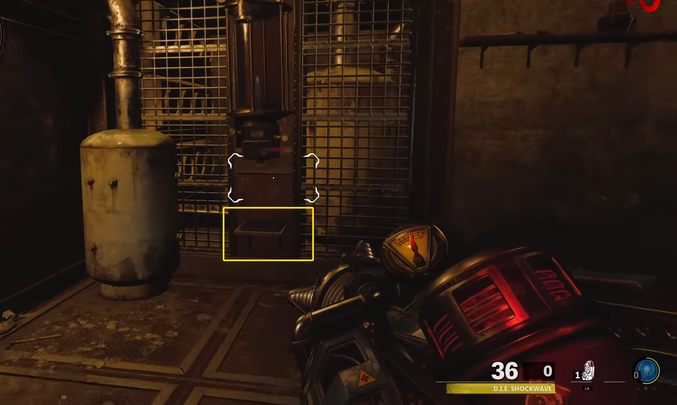 Here you can refill the canister.

The canister can be filled only during a Plaguehound round. Try to lure them as close to the canister as possible and then kill them- once the hounds are killed, the canister should fill with gas coming from the decomposing hounds. You will also receive a pop-up about this. Now take the canister with you, return to the surface, to the crashed plane.

Opposite the crashed plane, near the fence, you will find a crate - approach it, put the canister on it and then shoot at it. You can pick up your new weapon now.

Get the ice weapon

To get the ice weapon, repeat the previous steps leading to obtaining the canister and then, once on the roof, shoot at the crate marked in the photo below. 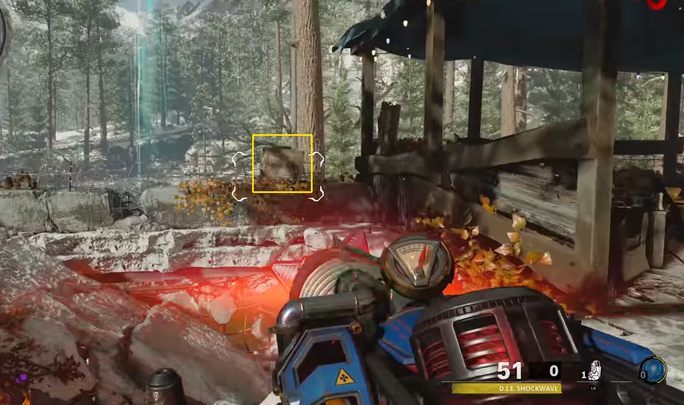 Once the crate is shot down, go down.

Go down to the pond where the crate fell and collect the empty bottle. At this point, you have to wait for a Megaton round and then lure them to the mushroom trees (see photo below). 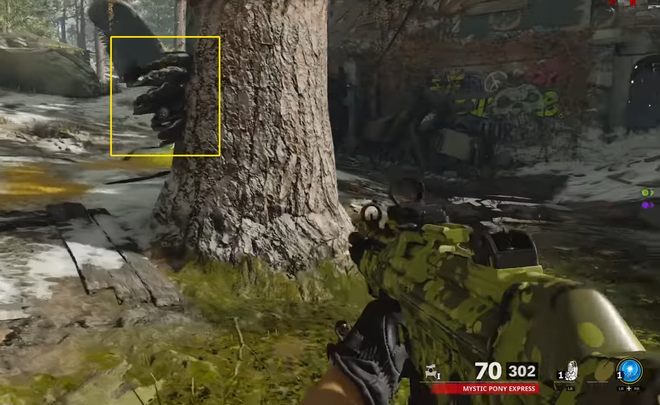 Lure megatons to the mushrooms growing on trees.

If you've already lured a megaton, make him split into two smaller zombies. Smaller versions will throw a toxic ball in your direction - stay in such a position that the ball hits a mushroom tree as in the photo above. If you've done it right, the mushrooms should glow purple.

At this point, you can take out all the zombies around you and then put the recently acquired, empty bottle next to a mushroom. Wait a second until the bottle fills up. When it's all blue, take it with you. Now head to the underground complex, find the medical bay (the name of the room you're currently in will be written in the upper left corner next to the map). 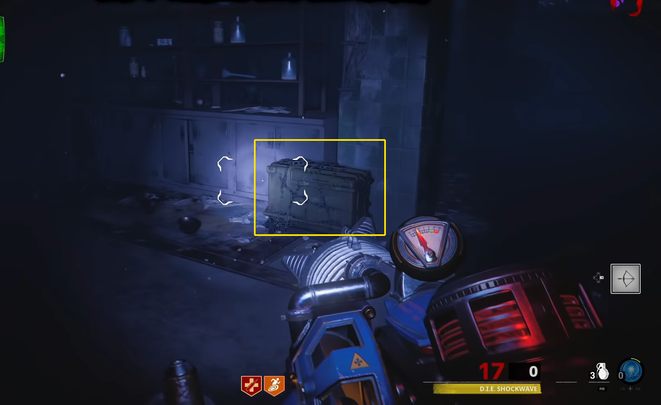 The ice weapon can be found inside this crate.

Inside the cabinet, you will find a chained crate - use your blue bottle.

You need 2 more weapons to complete this challenge, but before that, you will need a portal opener (Aetherscope). The device consists of 3 parts. Finding these parts will be problematic, because you will have to go back and forth to the alternative reality as much as 3 times. However, you have to be careful, because these parts usually spawn in a random order.

The first part for your device is located in the same room as Pack-A-Punch Machine, just behind the portal, as in the photo below. 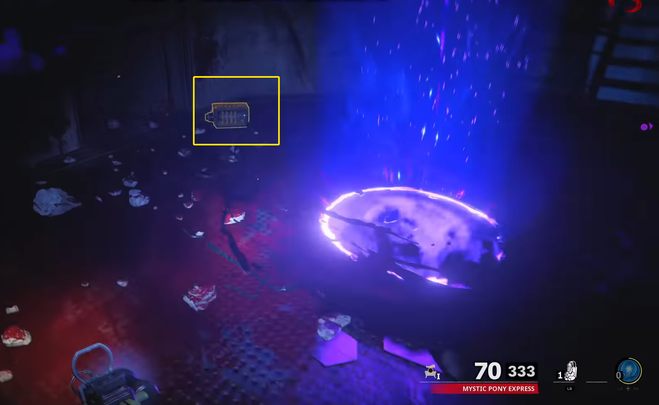 The first part can be found behind the portal, near Pack-A-Punch.

The second part of the device is located in the yard in the starting location, under the stairs (as in the photo below). 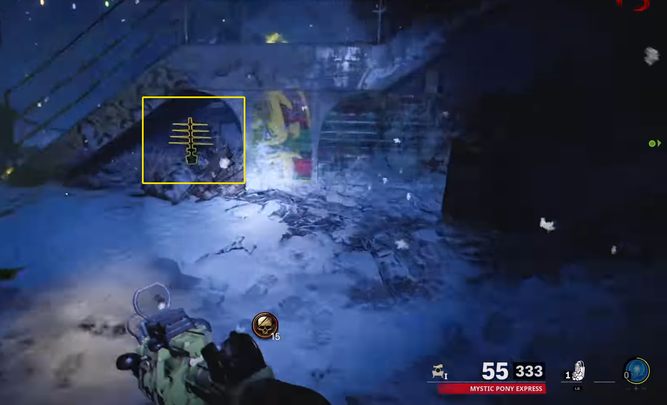 The second part of the device is located under the stairs.

The third part is easy to find - it is located on top of a plane wreckage, right past the starting location (this is where you can also unlock the Gallo weapon). If you have already acquired all 3 parts, go back to the room with Pack-A-Punch, go downstairs and find a crafting table. You will recognize the table by the purple caption above the table as in the photo below. 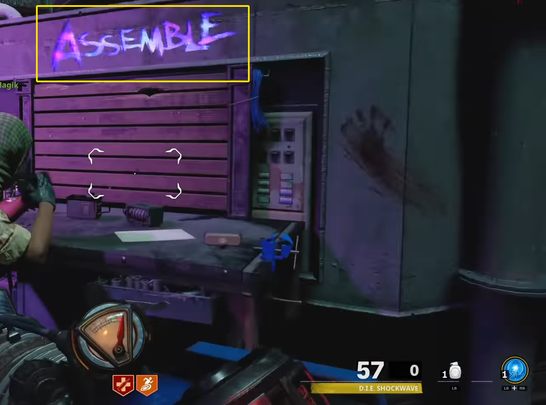 The caption will allow you to locate the table needed to craft the device.

Go to the table, put away all the parts and collect the device once constructed.

Enter the code into the computer and take the diary

If you've done everything right up to this point, the portal in the medical bay should open by now - enter it. It will transport you to the room with the computer (photo below). You can recognize the room by the "Password" caption on the window. Take the diary from the desk. 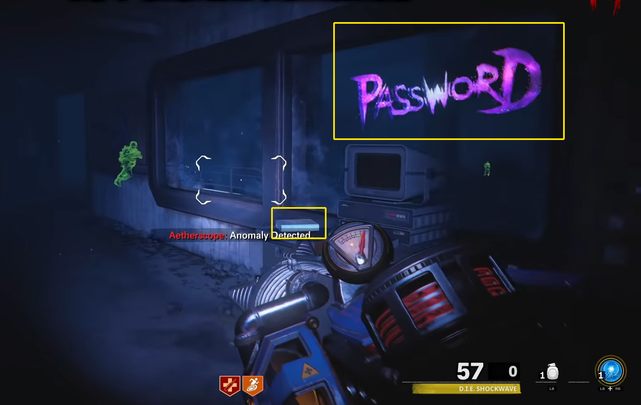 You will find a diary in this room.

Now, you must hand the diary to 3 ghosts - do it as quickly as possible, otherwise you will be teleported back to your world. The first ghost is in the medical bay, in the corner of the room, right behind the Speed Cola Machine. Activate the anomaly to summon the ghost.

The second ghost is in the control room on the right. The third ghost is located by the crafting table (you found it in the previous step). You will now be teleported to your world now - use the computer in front of you.

Get the fire weapon

Go to the lake and enter through the portal. When you enter another world, go to the plane wreckage and reach the cockpit strung on a tree. 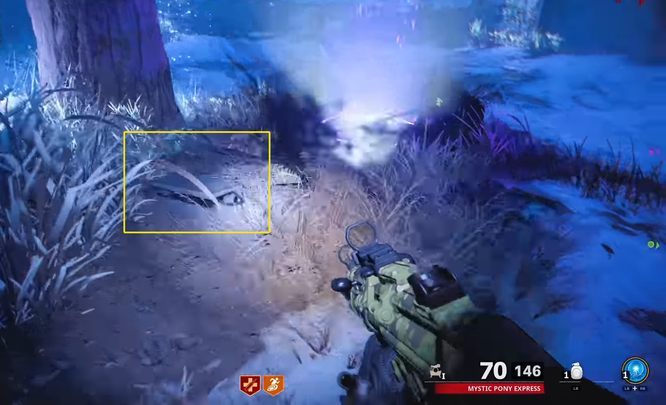 You'll find a crate under the cockpit.

There is a crate under the cockpit - hit it with the stock and take the fuse. Then go to the same place where you filled the canister with toxic gas (the lab under the bomb). There you will find a plasma cutting device and a crate - insert the fuse into the device and wait until it finishes cutting (see photo below). 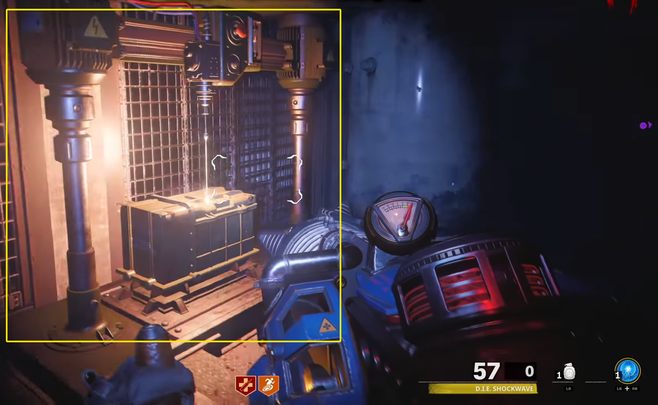 This is where you'll find the plasma cutter.

Go back to the pond on the surface and find the destroyed truck - in the back you will find a crate with a new weapon.

Get the electric weapon

To get the electric weapon, you need to go to the room with Pack-A-Punch, go downstairs and find the portal (the photo below shows where it is located). Enter the portal. 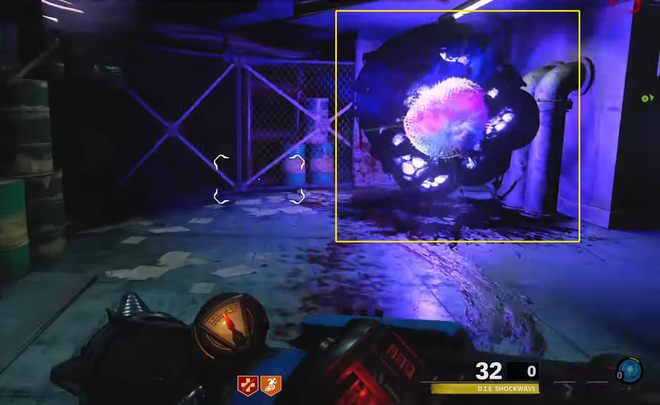 Here you will find a portal to another world.

Once you go through the portal, you will have to collect 3 yellow crystals. The first one is on the roof in the starting location - collect it using your new weapon (just like you did with the canister). The photo below shows what the crystal looks like. 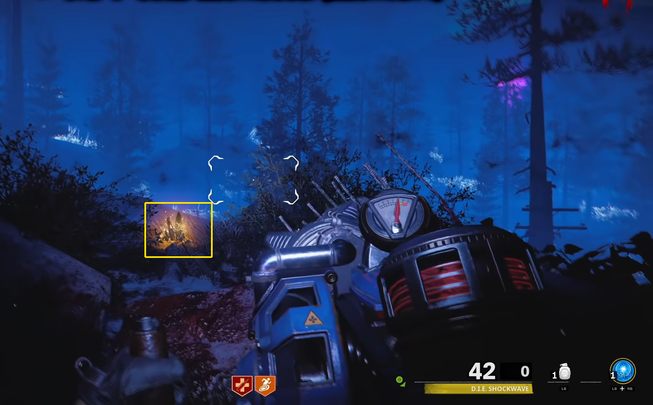 These are the kind of crystals you have to look for to get the electric weapon.

After collecting each crystal you have to go down to the underground facility and head to the Pack-A-Punch room, go down and find a crate in the corner - shoot at it. Below you will find a photo showing this crate. 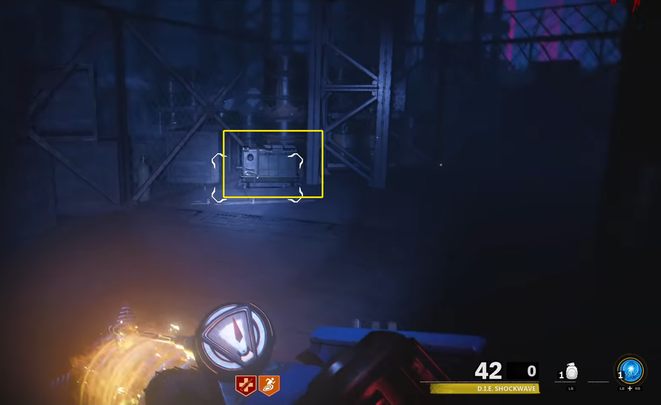 You have to "hide" the crystal inside the crate every time.

The second crystal will be found by the entrance to the underground, near the plane wreckage. Below you'll find a photo showing the location of the crystal. Collect it and then put it inside the crate. 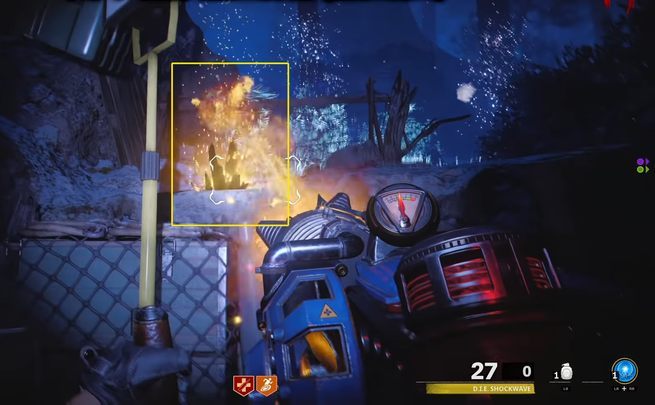 The crystal is behind the crates. 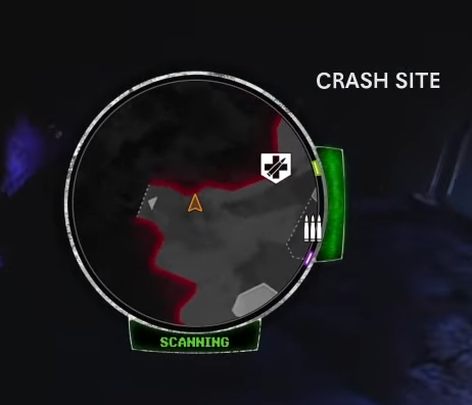 This is where you will find the second crystal.

The last crystal is located in the pond, near the entrance to the underground facility. Below you will find a photo with the location of the crystal. Pick it up and put it inside the crate. 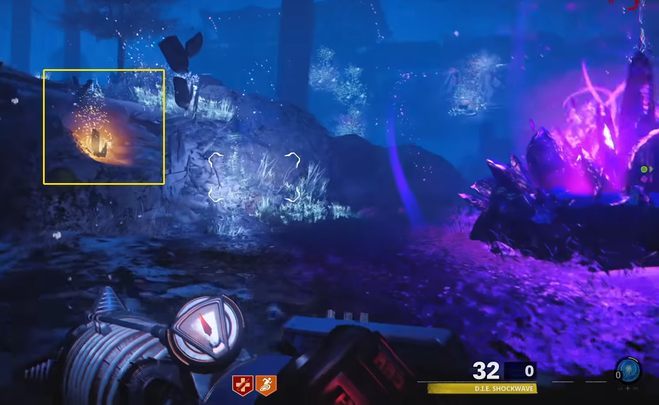 The last crystal is in the pond.

After you're teleported back to your world, go to the crate where you put away the crystals and open it. You've just obtained a new weapon.

Turn on the decontamination pod

If you have already obtained all the weapons you need, you can proceed to activate the pod, which is located in the medical bay. To activate it, you have to shoot at the protruding tubes with your new weapons (toxic, ice, fire and electric) - each tube will be activated by a different weapon. The tubes are marked in the photo below. If the tube is activated, it will go up. 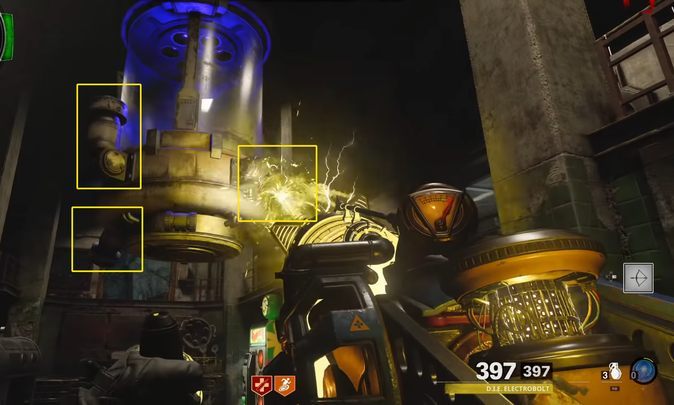 Shoot the projecting tubes with all the weapons you've crafted.

Get the key from the alternative reality and get the decontamination agent. Trap the Megaton in the pod and turn on its power and that of the computer

When you activate the pod, a new portal will spawn nearby - use it. In the same room but one floor up (in front of the room where you collected the diary), you will find another anomaly and the ghosts of two soldiers talking. After the conversation, you will be teleported back to your world. There will be a key lying on the floor - take it.

Take the key to the tank, which is located in front of the starting location (in the yard) and use it several times. A zombie will jump out of the tank - kill it. Then throw a grenade through the open manhole (preferably a sticky one if it's possible). After that, the tank will fire a golden bullet towards the tree, near the plane wreckage bythe cockpit (photo below). 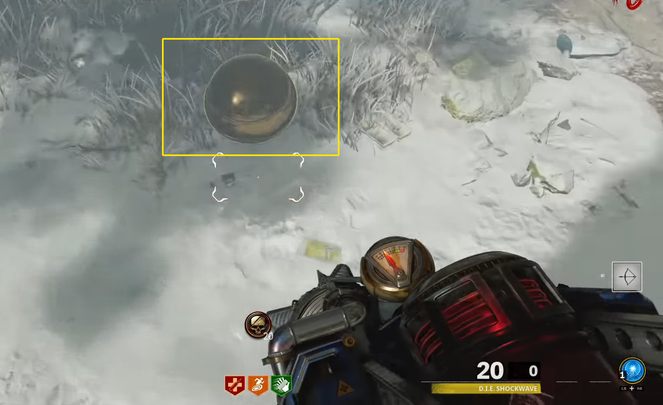 Look for the bullet near the cockpit.

Take the bullet to the medical bay, to the glass cabinet, as in the photo below (the cabinet is located next to the computer room). 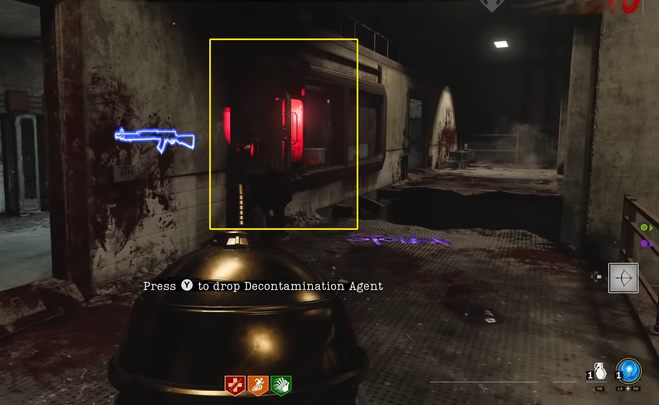 Put the golden bullet inside the cabinet.

Now wait for the Megaton miniboss wave. Stay in the bay downstairs and try to kill Megaton once it's near the pod. Split zombies that are exactly underneath the pod should be automatically sucked inside. 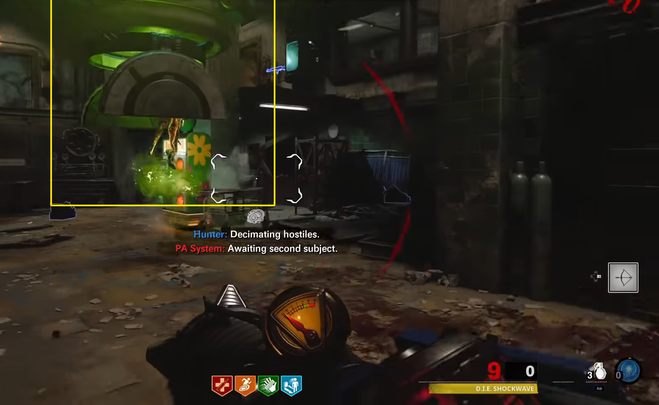 Lure the separated zombies into the tube.

Now go upstairs and use the computer. Get ready for the fight, buy grenades, ammo, vests - you are about to face the boss really soon.

In the living room of the first building in the starting location, there's a portal to another world. Enter it. Go inside the building next to the yard and go downstairs (location: Omega Outpost). This is where you'll find the spirit of Orlov. Talk to him. You'll go back to your world and you will notice a picture falling onto the desk.

Take the photo with you and head to the Pack-A-Punch Machine. Now you have to protect Orlov, who will be disabling the particle accelerator. Orlov's pretty strong, so you'll be worrying more about your own survival. The whole fight consists of 4 parts - zombies will attack from a different direction in each of them. The fight will last 6-8 minutes. Your new electric weapon will prove very useful.

Escape from the location

After the boss fight, you have 1,30 min. to escape from the map. Head to the pond, avoiding electrical explosions such as in the photo below. 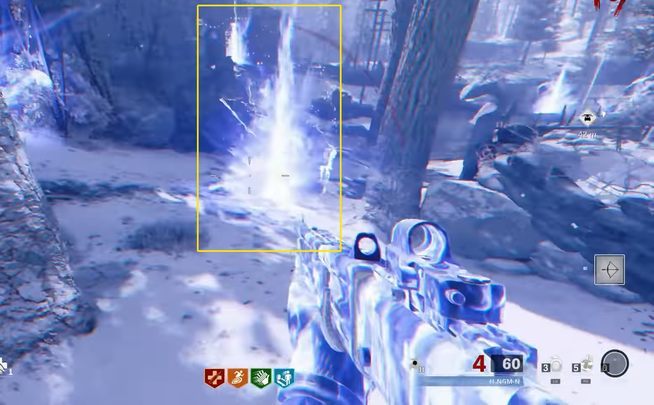 Avoid the flashes at all costs.

The chopper should be waiting for you by now. It's enough if only one person from the entire team gets to the chopper. It's over, the challenge is completed!