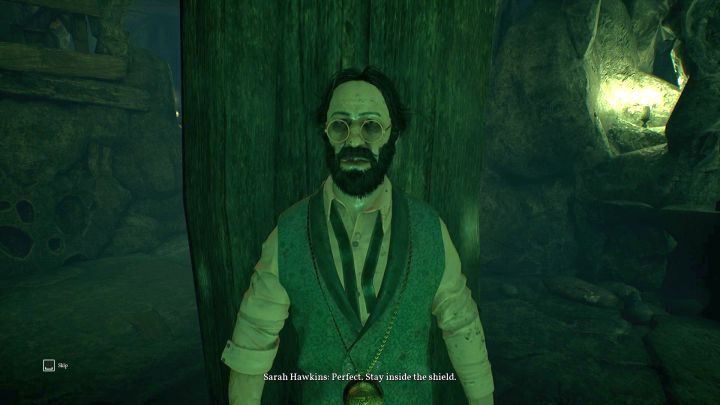 Aldernon Drake will explain to you how to defeat Wandering.

When the protagonist (in Sarah Hawkins' body) and Drake reach their target, the man will explain to you how to defeat the creature. From the conversation, you will learn that three barriers have to be destroyed here in order to be able to chase the monster away once and for all. The premises here are essentially quite simple - you have to go to the barrier, enter it, wait a few seconds and quickly escape back to Drake, who has prepared the protection zone, into which the Shambler will not follow you. Everything has to be repeated three times. Luckily, the game is saved automatically between after each barrier is destroyed, so that in case of failure, you don't have to repeat the entire section.

Find and destroy the first glyph 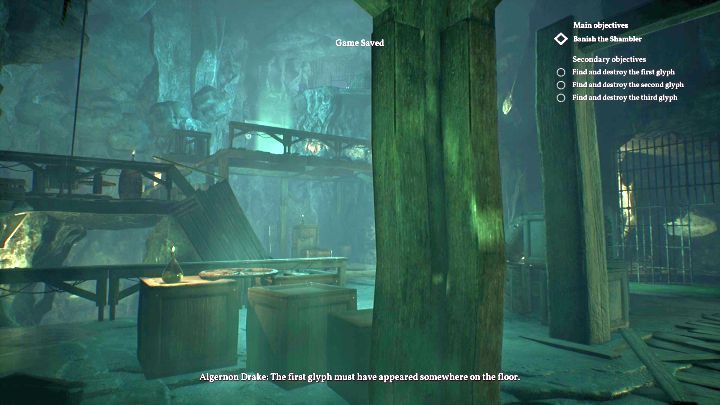 The first glyph is on the first floor.

The first glyph is on the first floor - it's easy to see it from where Drake set the barrier. Get closer to the glyph, examining your surroundings along the way - this will allow you to plan your escape route. Until you enter inside the glyph, the Shambler will not appear. 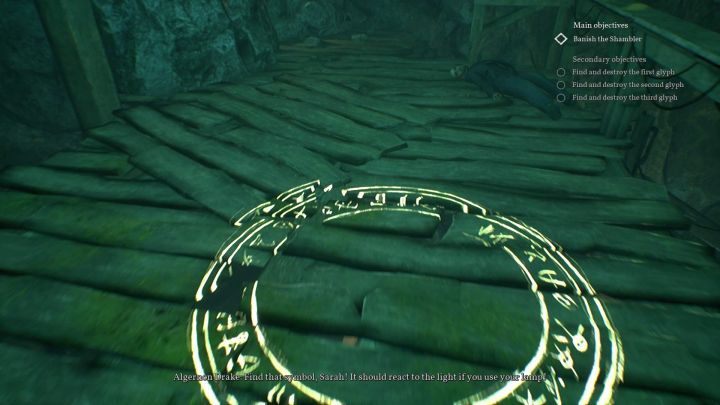 Enter the inside of the glyph and it will be destroyed after a few seconds.

Once you know the escape route, go inside the glyph and wait a few seconds. As soon as the barrier is removed, the Shambler will appear - don't worry about that too much, because it's far enough for you to sprint back to Drake before it catches up with you.

Find and destroy the second glyph 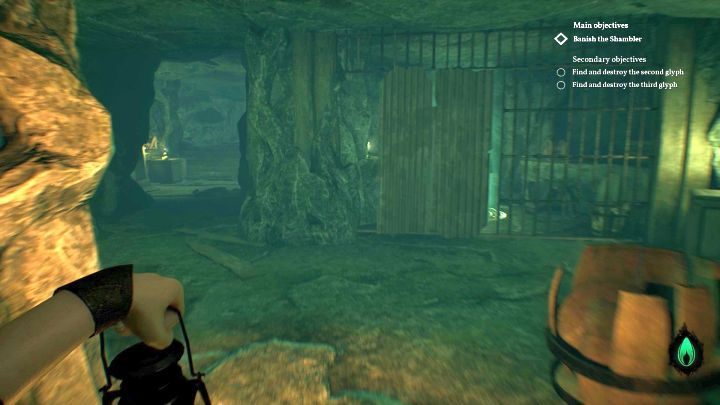 The second glyph is behind the fence.

The second glyph is located on the main level of the cave. Refill the lamp oil - the tank is located right next to the protection zone set by Drake - and then head towards the glyph. Go to the fence that blocks the passage - you must first open it before you can destroy the glyph. 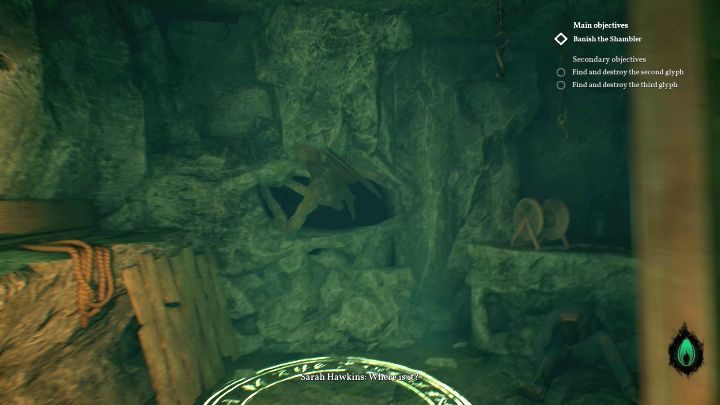 The Shambler appears here before you can destroy the glyph - you have to escape to Drake and return when the creature disappears.

As soon as you open the fence gate, the Shambler appears. You won't manage to destroy the glyph before the monster attacks you, so you have to escape to Drake at this point. You can use the lamp to make the escape easier - increasing the intensity of light (as in chapter 9) slows your enemy for a short while and prevents it from attacking. Be careful not to hold the illumination button all the time, but rather to activate it for about a second, release the button and repeat the process after 2-3 seconds. In this way, you will save a lot of oil in the lamp. 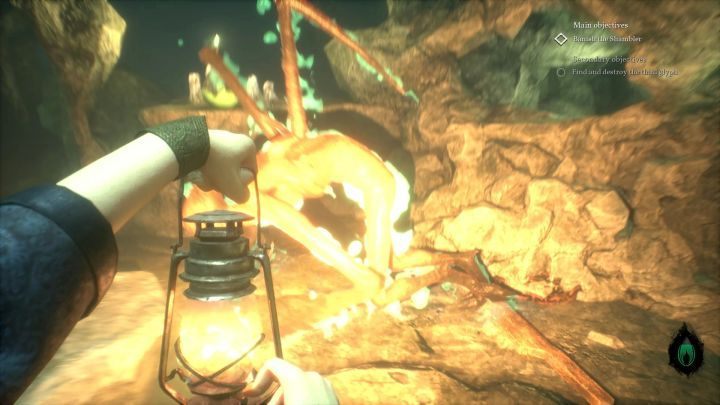 Use the lamp to weaken the enemy and head back to Drake.

Enter the inside of Drake's safety barrier and wait for the monster to disappear. Refill the oil in the lamp and go back to the second glyph. Go inside and wait until it is destroyed, then run back to Drake. You will encounter the Shambler - use the lamp again to weaken it and slowly sneak past it, all the while blasting the creature with light from the lamp.

Find and destroy the third glyph 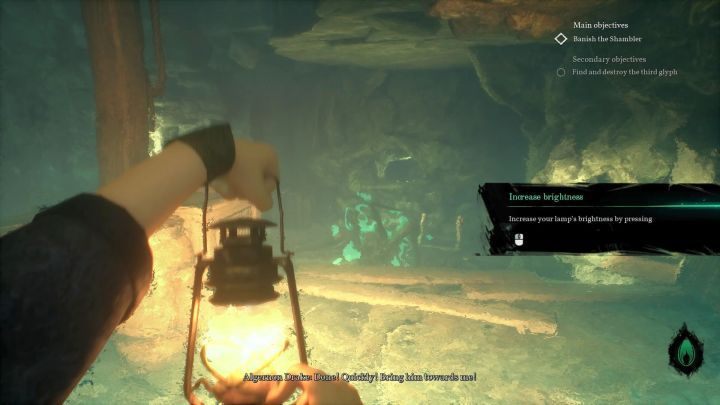 Weaken the enemy while still standing inside the glyph.

Time for the third glyph. Things are a bit different now - you have to lure the monster to Drake so that he can banish it once and for all. Refill the oil level in the lamp and go to the third glyph. 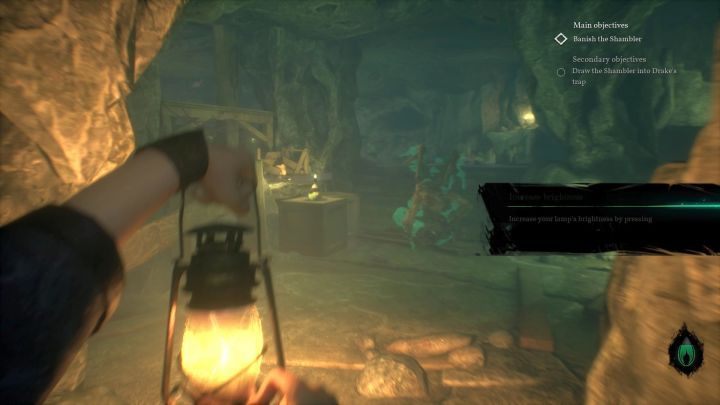 Go towards Drake, while constantly weakening the Shambler.

The Shambler will appear while you're still inside the glyph. Use the lamp to weaken it right away. When you are able to move, head slowly to a safe zone set by Drake, all the time blinding the enemy with the lamp. Enter the Drake barrier and wait for the creature to do the same. 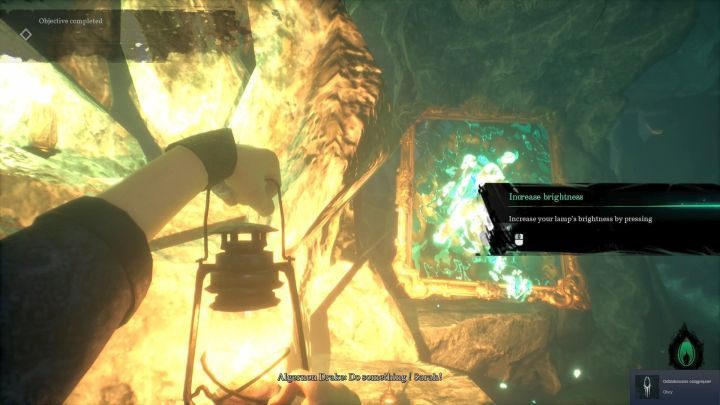 Interact with the image to get rid of the enemy once and for all.

When the enemy is inside the barrier, it will be immobilized. Get closer to the image of the Shambler, which is located right next to the oil tank, and interact with it. This, in turn, will pull the creature into the canvas and you will get rid of it for good.

Attention - for defeating The Shambler the achievement called The Outsider will be unlocked. You can also collect another achievement - Companion in arms - just do a simple operation. When the Shambler starts to be pulled into the canvas, illuminate him intensively with a lamp - the enemy will try to pull your companion with him, the lamp will prevent him from doing so, and your second achievement is unlocked.