Call of Cthulhu, despite being a pure-blood adventure game, also contains elements of sneaking, horror and, what is unique in this genre, RPG. The RPG aspect of the game is manifested by the skills available to the hero - they affect the dialog options that can be selected during conversations, the chance of success of some actions, and sometimes unlock access to a unique way of solving a problem.

The hero has 7 skills at their disposal - Eloquence, Strength, Spot Hidden, Investigation, Psychology, Medicine, and Occultism. 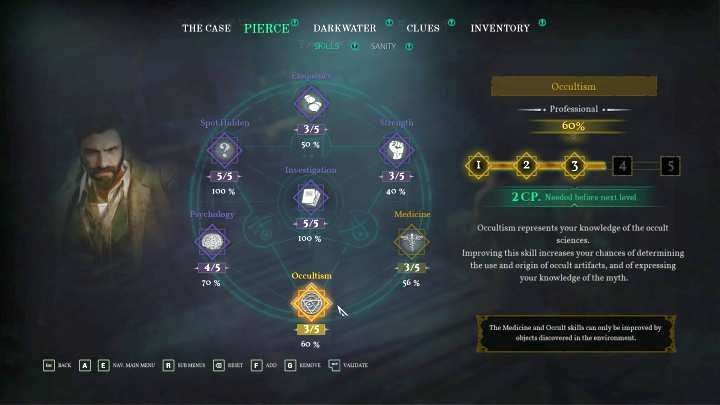 Capability development is mainly based on the simple allocation of ability points. The protagonist receives a different amount of points for completing different tasks, then the points can be allocated on the ability screen. Each ability has 5 "advancement" thresholds - these are the thresholds that determine whether the use of capabilities will be successful or not.

In the case of Eloquence, Strength, Instinct, Investigation and Psychology abilities, the development consists in assigning points to them. Things are different in the case of Medicine and Occultism - they are developed by collecting, respectively, medical books and occult objects. Points can only be allocated to Medicine and Occultism at the beginning when the hero speaks on the phone and the player can distribute the first points.

The ability that allows the protagonist to influence another person during a conversation - generally speaking, this is simply persuasion. Developing this ability is useful when you want to obtain from another character some more confidential information that he or she wouldn't normally share.

Strength is the ability that allows the hero to influence others during a conversation, forcing his own opinion on them - looking at the standards of RPG games, it would be the intimidation ability. In addition, strength affects the hero's ability to force the door open and operate mechanisms - the wrong value of this parameter can make you fail some tests - for example, the mechanism might become jammed and block the passage.

This parameter increases your ability to notice things that usually go by unnoticed. It mainly influences the distance from which you will be able to see the thing with which you can interact. In some cases, it comes in handy for the hero to notice an item at all - although these are purely cosmetic items, mainly needed to get the John Raymond Lagrasse's achievement.

Investigation comes in handy during conversations with characters and examining clues, however, the most important thing is that it increases the chance of opening a lock with picklocks. In a few cases - as in chapter 5, where the hero has to get to a closed room to turn on the power supply - its development is mandatory. Of all abilities, Investigation should be developed first.

The ability of Psychology is a little bit similar to eloquence - it allows you to get to know the feelings of the other person during the conversation, unlocking additional dialogue options. It also enables the analysis of some objects (e.g. during reconstructions). Of all abilities, Psychology is the least useful - nor is it required to unlock any achievement.

Medicine represents the medical knowledge of the main character, it also allows to examine various drugs and the health of a person. It does not significantly affect the gameplay; it just allows you to learn more about additional things.

Attention - Apart from Occultism, medicine is the only ability in the game that cannot be developed with ability points. You can assign points to it only at the beginning of the game, then it's developed by collecting various medical books (their location is indicated in the walkthrough).

Occultism represents the hero's knowledge of occult sciences and behaviors, it also allows to study occult objects, often unlocking additional lines of dialogue during conversations with other people. Just like medicine, it does not significantly affect the gameplay, allowing you to learn additional information about the game world.

Note - Occultism, like Medicine, is an ability that cannot be developed by investing points. You can assign points to it only at the beginning of the game, then it's developed by collecting various occult items (their location is indicated in the walkthrough).