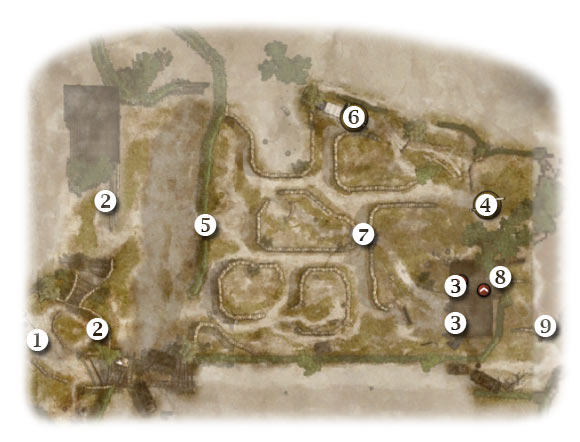 Obviously you begin near the first cannon (1 on the map). Travel to the east and you'll notice that you're getting closer to a second 88. The first decision you'll need to make is to where set up your teams. I would recommend that you keep your squads to the west of the river, because advancing with them would be very risky. You can order your teammates to hide on top of a small hill [#290] or closer the river (2 on the map). 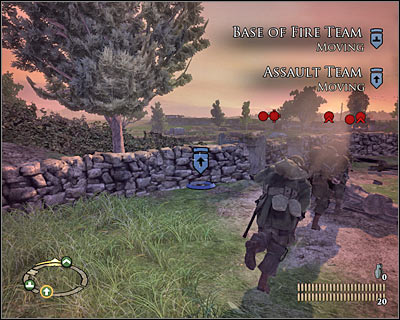 Either way, you should spend some time scouting the surrounding area. Order your squads to suppress two heavy machine gun posts which are located to the south (3 on the map) of the main cannon [#291]. Obviously you will also have to remember about avoiding the cannon itself (4 on the map), because one successful shot will be more than enough to kill Baker. You don't have to ask your teams to suppress the cannon, because it wouldn't do you any good. 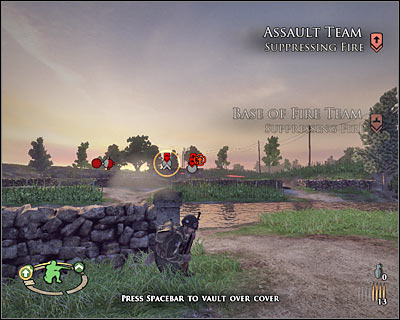 Before you decide to leave cover, make sure that the area in front of MG nests isn't occupied by any German soldiers. It's important, because otherwise they could have surprised you in the future. Start RUNNING east. Cross the river and keep heading towards the northern passageway (5 on the map) [#292]. Press the crouch key once you've arrived to avoid injuries. 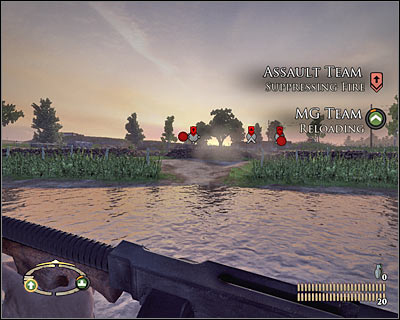 You must start moving north-east. Your objective at the moment is to reach an ammo stash (6 on the map). This area was guarded by enemy troops, but they'll probably retreat to the cannon. Before you decide to get to the stash [#293], order your men to suppress the cannon, so you won't be attacked by the 88 in the meantime. Otherwise it would be next to impossible to get the supplies safely. 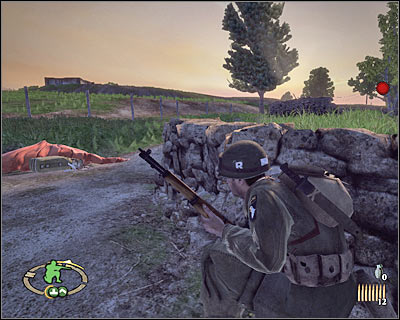 Once you've collected grenades, start moving south. Your colleagues should once again focus on suppressing enemy machine gun posts. Make sure that you're crouching all the time and prevent German soldiers from surprising you. Go under the bridge [#294] and get closer to the MG nests. Obviously you must use grenades here. 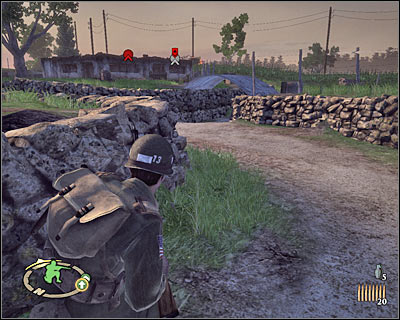 Focus on securing the room to your right, because disabling this nest will allow you to get to the building [#295]. Choose a machine gun from your inventory, move forward and take cover behind the left wall. Lean out and disable the gunner. Don't exit the building just yet, because you'll find your first kilroy here (8 on the map). Collect this achievement before moving on. 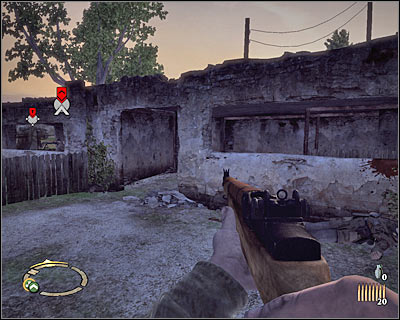 I guess you won't be surprised to hear that you'll have to focus your attention on destroying the second cannon [#296]. Thankfully you'll be given a freedom of choice. You can use grenades, lean out and fire or surprise the gunners. Don't forget to blow up the 88. Collect supplies from the ammo stash and proceed south (9 on the map). This is where you'll find two remaining cannons. 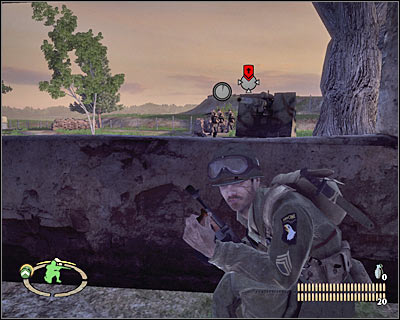